The Dawson Mounds Site (23BO9) was excavated and published by Gerard Fowke in the Smithsonian Institution's Bureau of American Ethnology Bulletin 37. His fieldwork in 1906-7 was sponsored by the St. Louis Society of the Archaeological Institute of America. 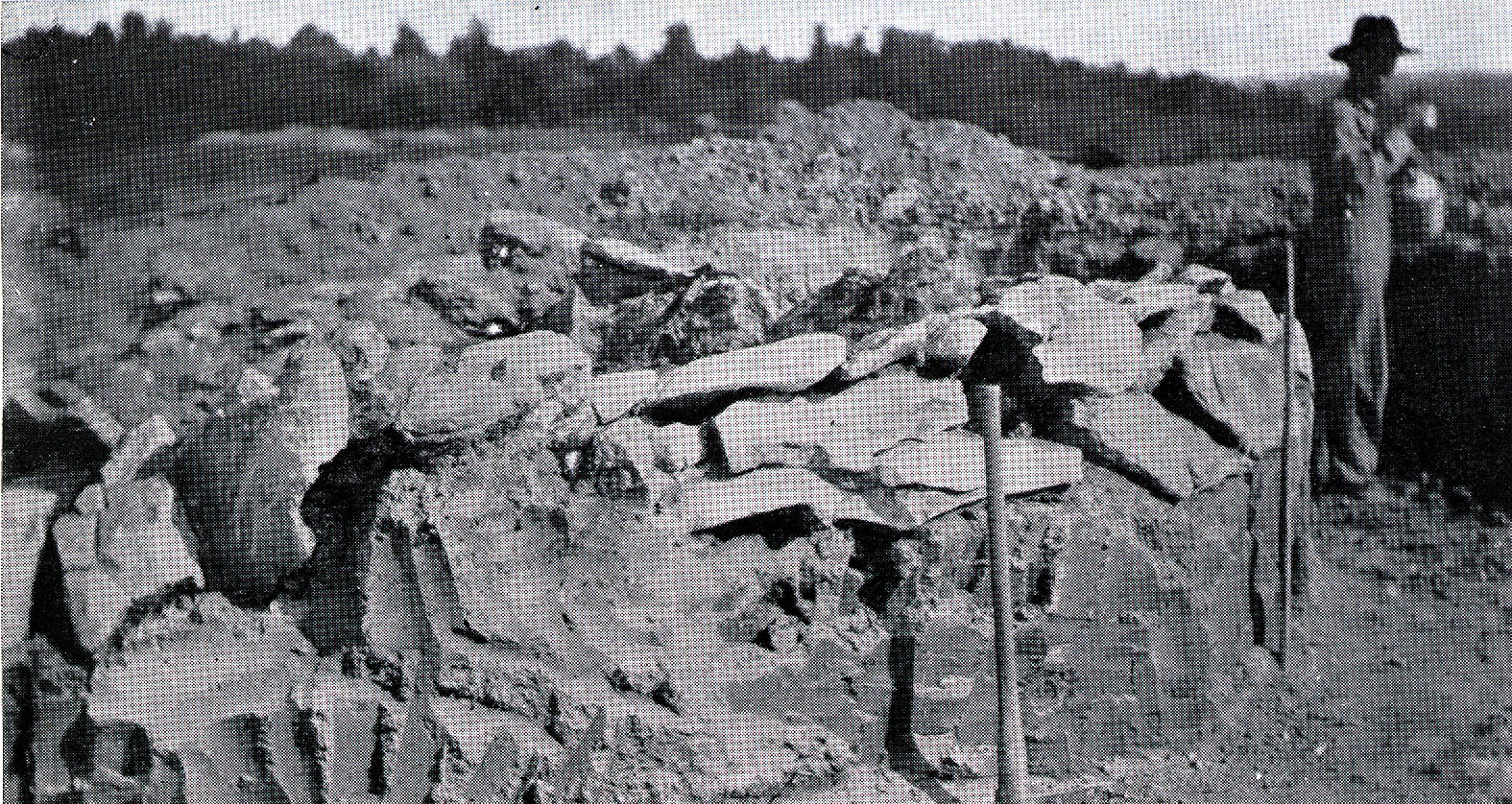 Limestone slabs forming the exterior of a stone vault in the interior of mound 9. This image was scanned from Plate 5a in the BAE report. Note the individual on the right side. Is that a moonshine jug? 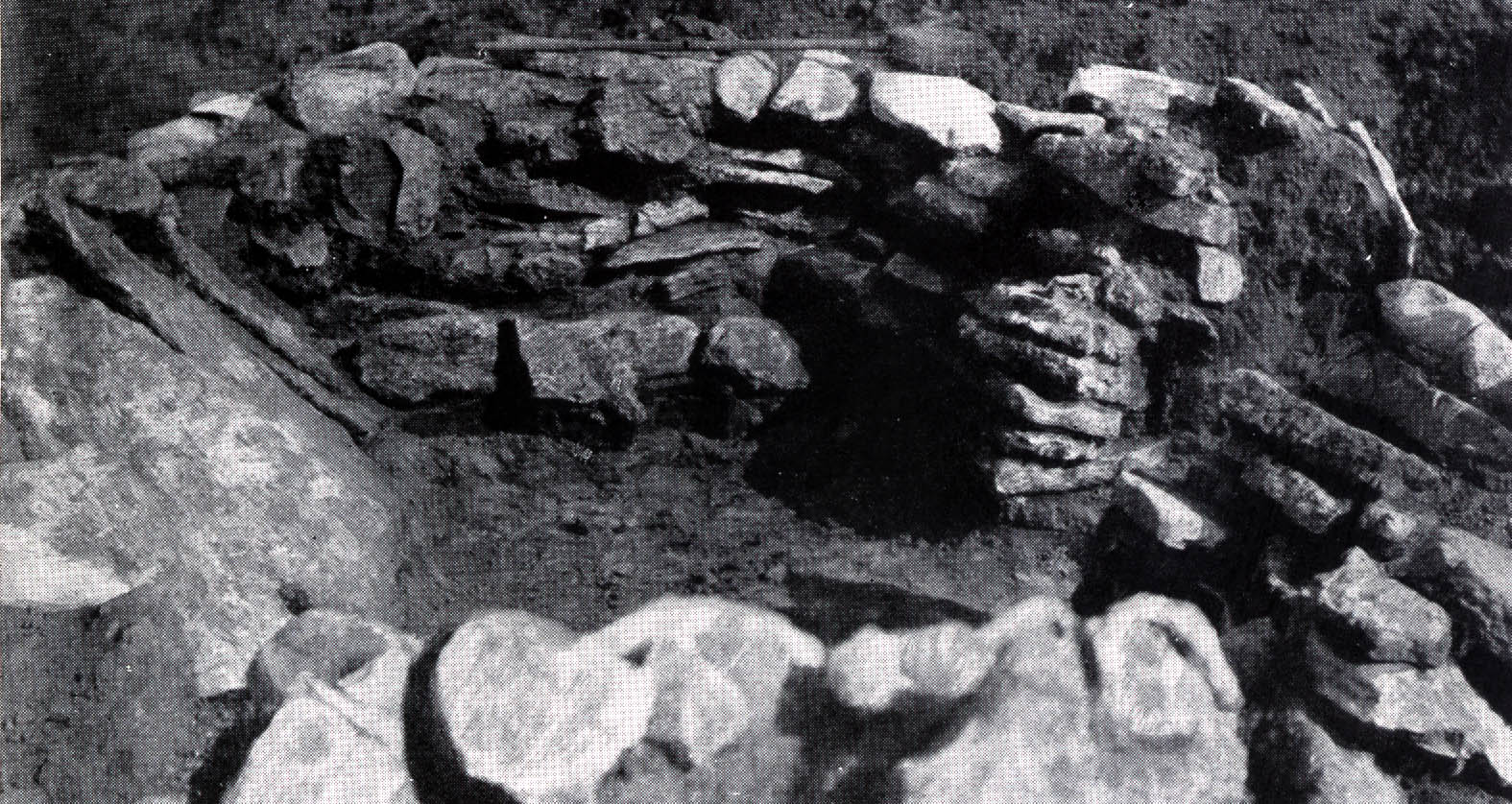 Looking southeast across the vault of the central chamber in mound 9. This image was scanned from Plate 5b in the BAE report. 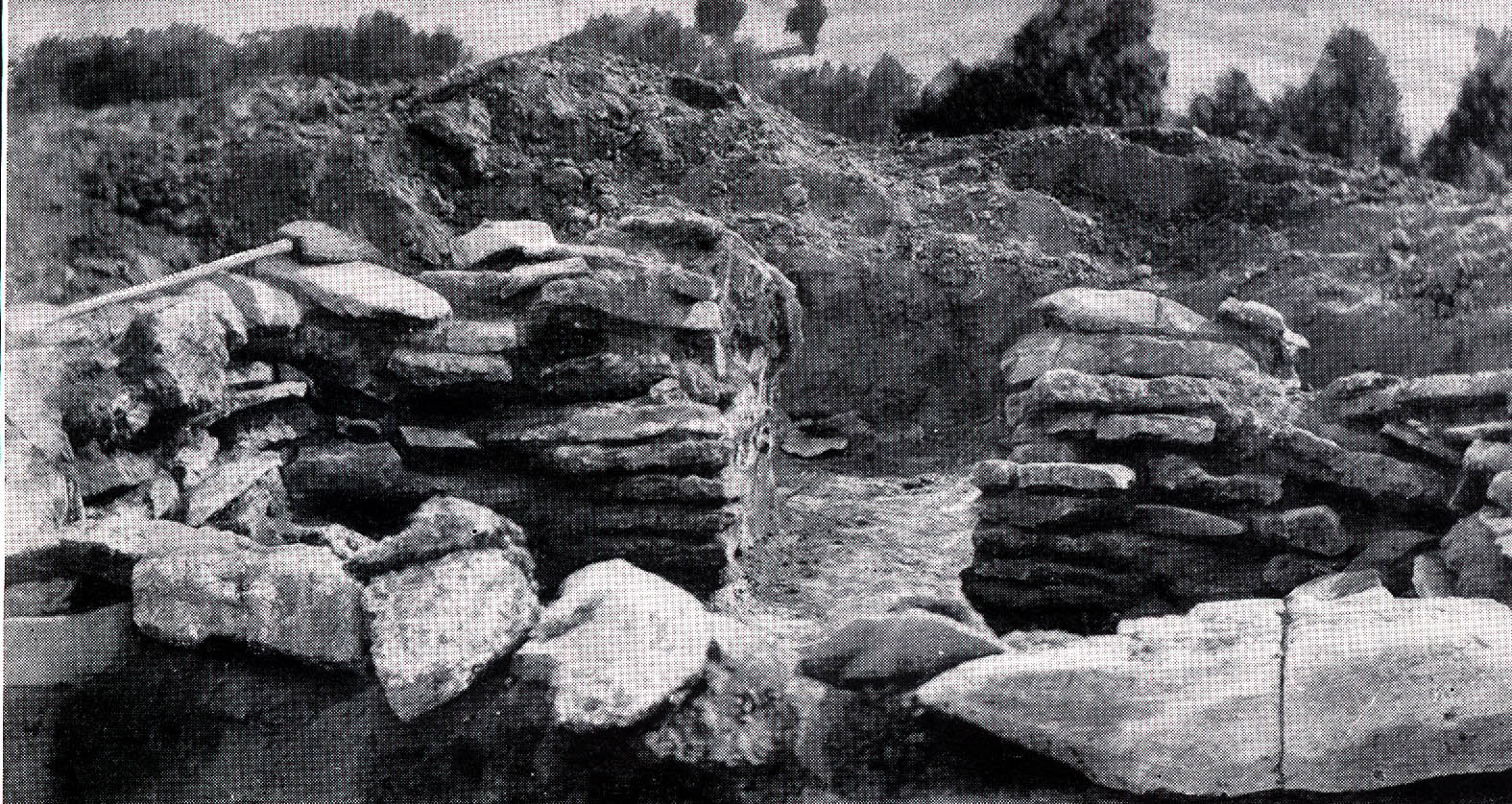 Looking east across the vault and through the entrance of the central chamber in mound 9. This image was scanned from Plate 5c in the BAE report.

Fowke reported that the archaeological site of Dawson Mounds consisted of 15 mounds. Two mounds, the most prominent, had already been "ravaged" by artifact collectors. Fowke excavated 13 undisturbed mounds, described their contents, took post-excavation photographs, and photographed a few of the artifacts. Mound number 9 measured 35 by 45 feet (10.7 by 13.7 meters) and was 3 feet (1 meter) in height. Fowke (1910:33) notes that its height had been greatly reduced by cultivation. Mound number 11 measured 50 feet (15.2 meters) in diameter and 6 to 9 feet (2 to 3 meters) in height. 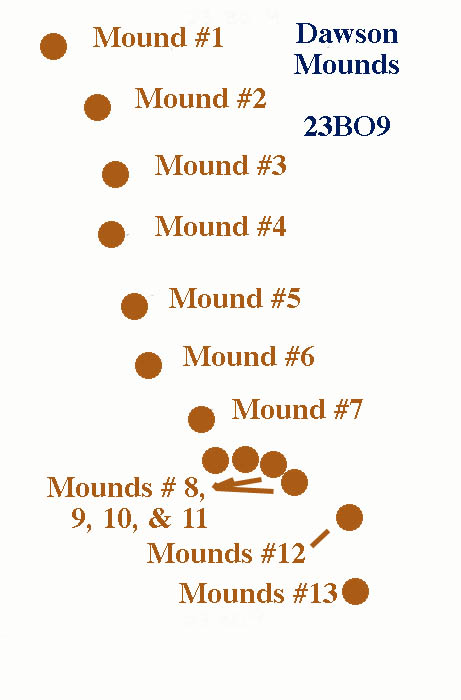 Map based on a sketchmap in the Archaeological Survey of Missouri. The distance relationship and orientation of the mounds is true to the sketchmap, but the diameter of the mounds has been exaggerated by several times to make them standout on the map.

A very brief summary of the burials was published at the back of Fowke's report by Ales Hrdlicka. He noted that the bone material was very fragmentary, partly from preservation and partly by Fowke's excavation methods. Skull number 39 from Dawson Mound 9 included the maxillary (upper jaw) and a portion of the mandible (lower jaw) of an adult male. The maxillary has marked alveolar prognathism with normal teeth showing moderate wear. The external breath of the palate is 6 cm and external length is 5.5 cm. Breadth of the nose is 2.5 cm. Suborbital fossae is pronounced.

Hrdlicka described skull no. 41 from Dawson Mound 11 as an adult female that is very prognathic with shovel shaped incisors. The left third molar was diminutive and right third molar had not erupted. Teeth moderate and somewhat irregular wear patterns.
Denny, Sidney Grant
1964 Re-evalution of the Boone Focus: A Late Woodland Manifestation in Central Missouri. Unpublished MA thesis, Dept. of Anthropology at University of Missouri - Columbia.

Special thanks to Jeff Meyer, Associate Curator of Museum Collections, for his patient assistance in locating and documenting the Dawson Mounds artifacts in the Missouri Historical Society.

Many thanks to Daniel S. Gover, Asst. Curator of the Museum of Anthropology at the University of Missouri of Columbia for providing a copy of the 1936 Archaeological Survey of Missouri site form describing Dawson Mounds.