A remarkble shell gorget was discovered in situ during the University of Missouri rescue excavation at Fairfield Mound number 2. 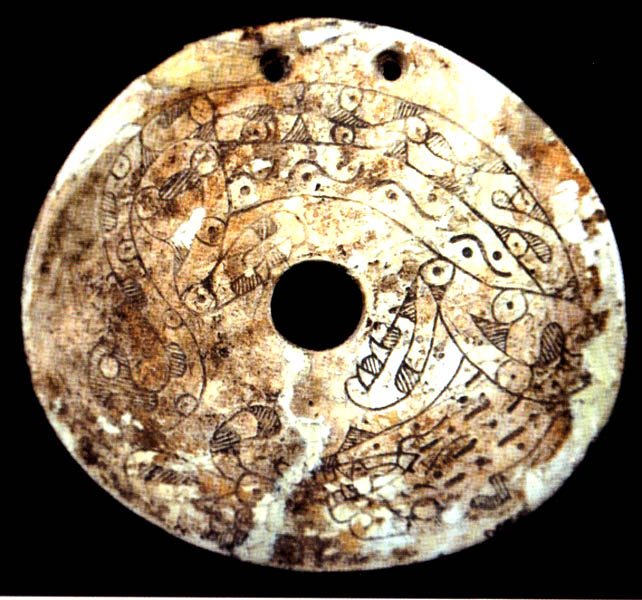 Image of the jaguar gorget scanned from the 2007 Missouri Archaeology Poster. The gorget was discovered with the engraved surface facing down. 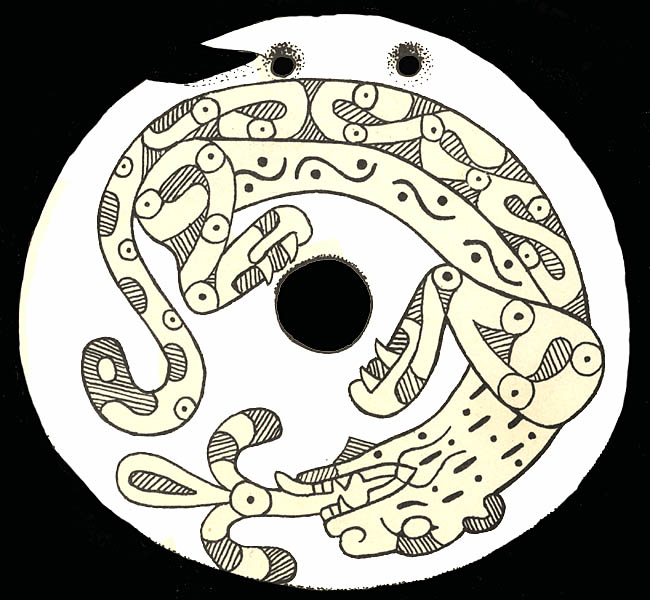 Drawing of the shell gorget scanned from the cover of The Missouri Archaeologist, Vol. 23 (1961). 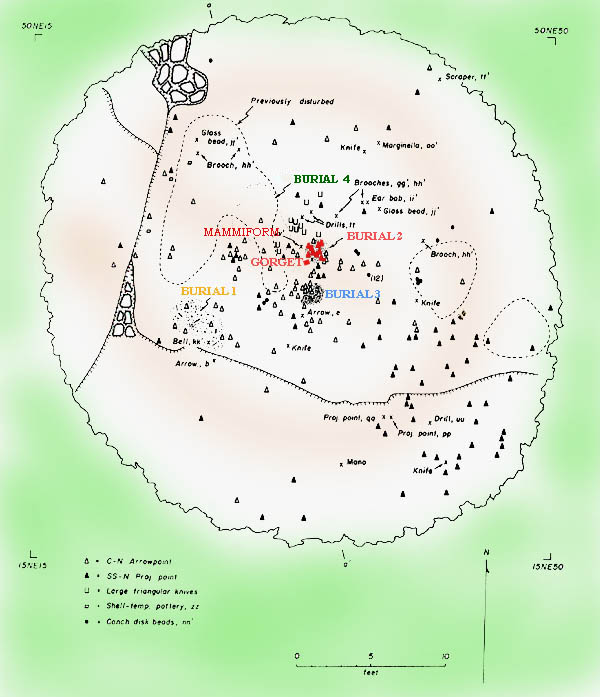 Colorized plan of mound number 2 at the Fairfield site. Adapted from Wood (1967: Figure 6). The engraved gorget was associated with a scattered bundle burial (number 2) almost in the center of the mound. Other associated artifacts include several small Scallorn arrowpoints, Rice Side-Notched points, a mammiform artifact, an antler cylinder, a cache of triangular knives, beaver teeth, conch shell beads and snail shell beads.

Colorized profile of mound 2 at the Fairfield site. Adapted from Wood (1967: Figure 6).

Map showing the relationship between the four mounds at the Fairfield site (Wood 1967: Figure 1). Plans for Mounds 1, 3, and 4 are presented at the end of this webpage. 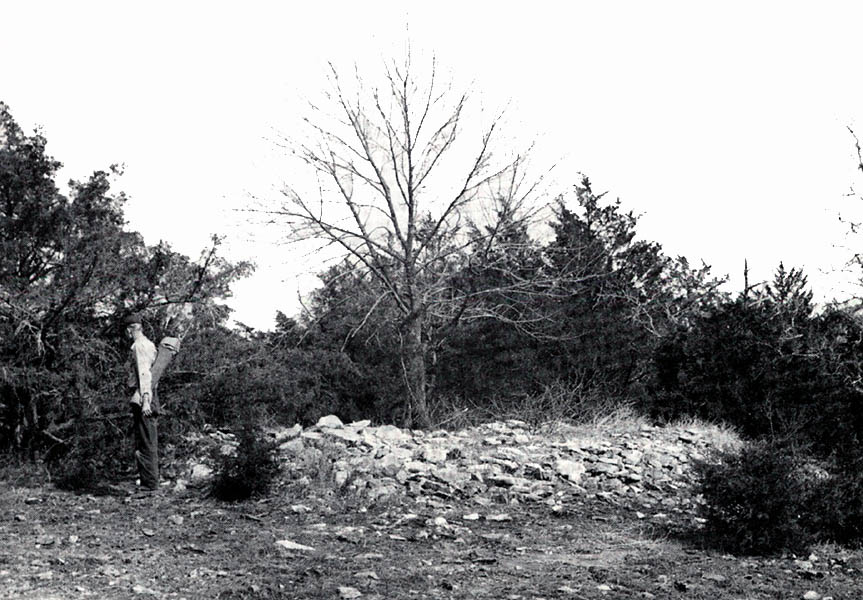 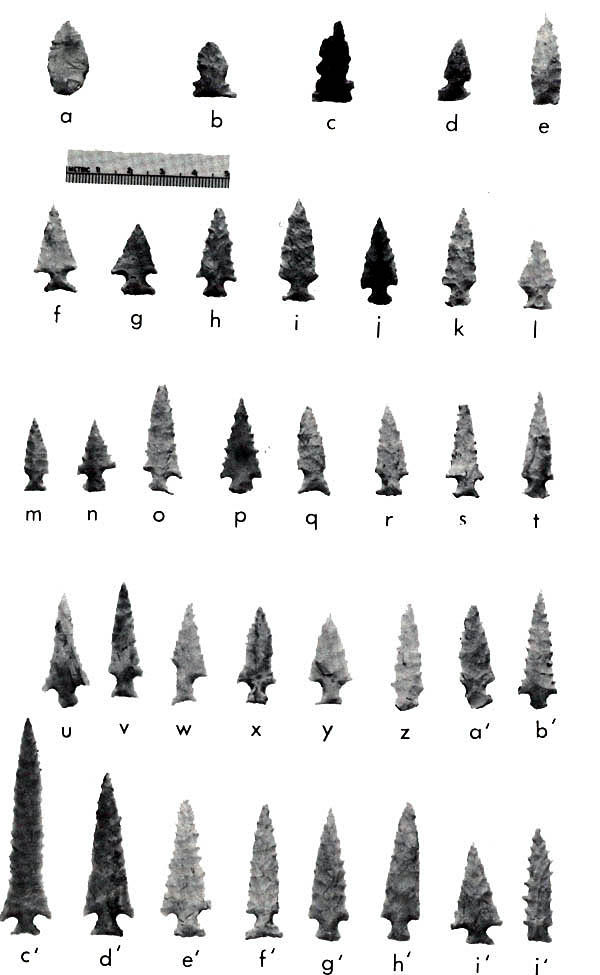 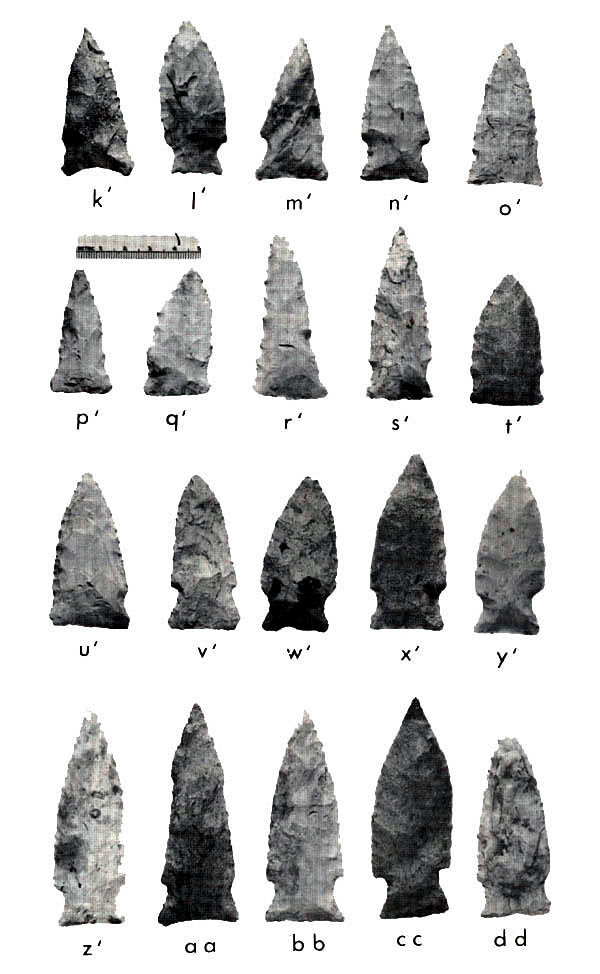 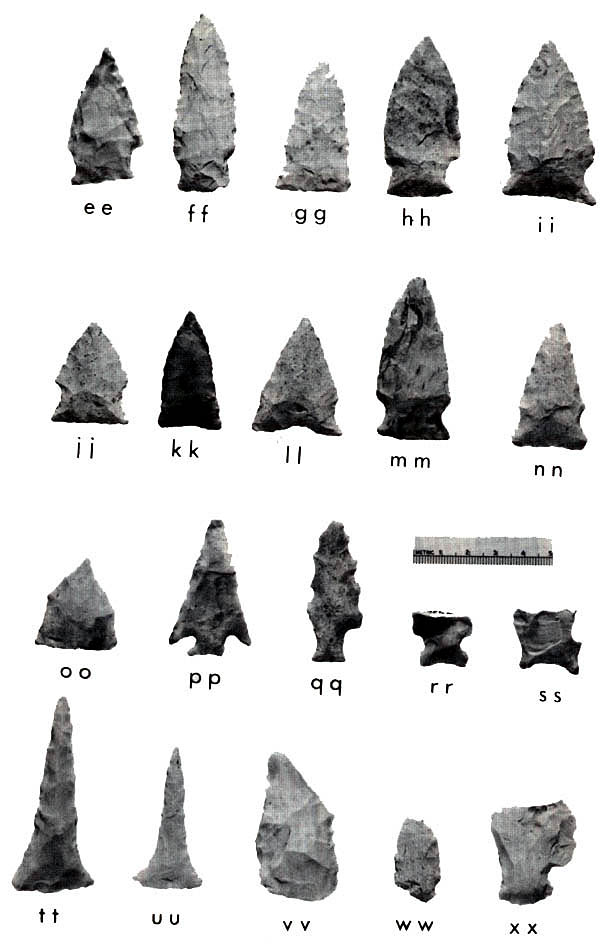 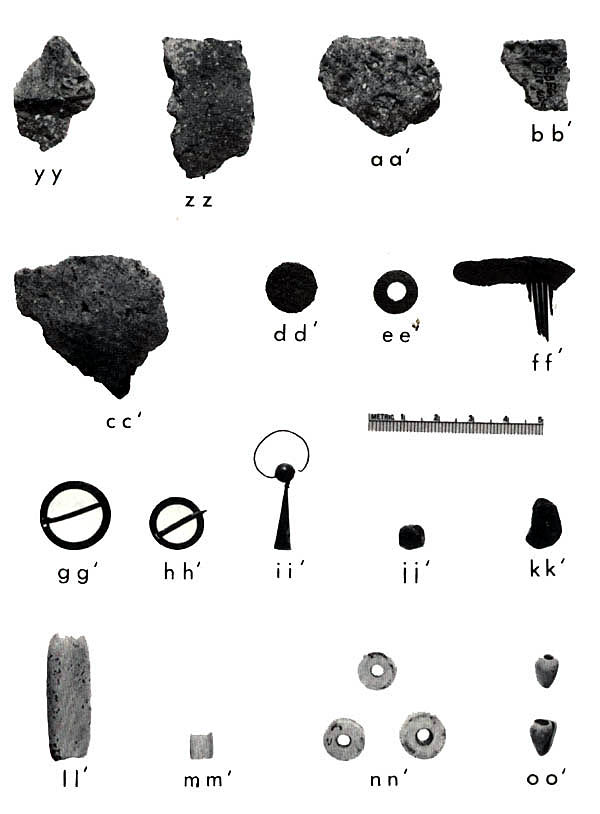 Pottery and other artifacts from Fairfield Mound 2 (Wood 1967: Figure 10). 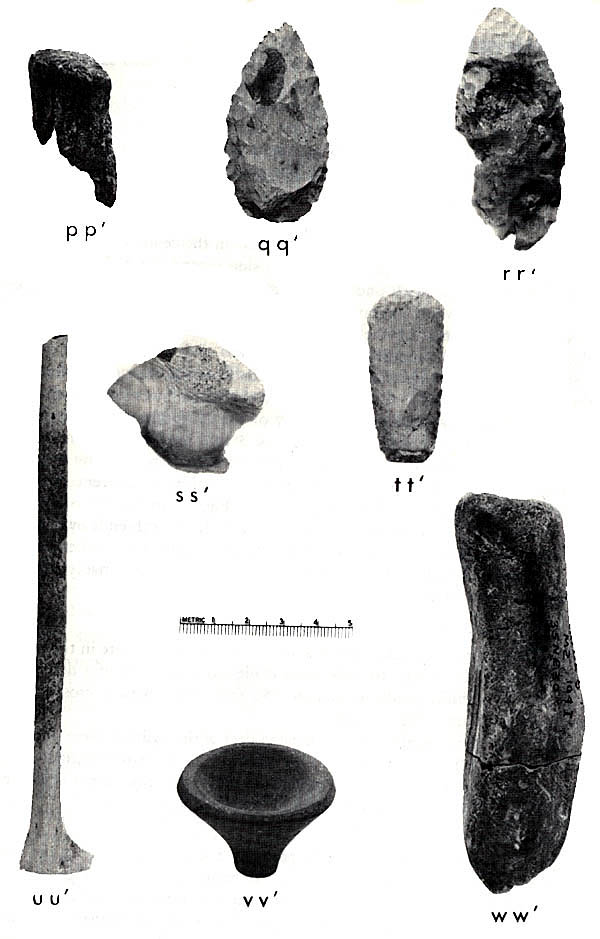 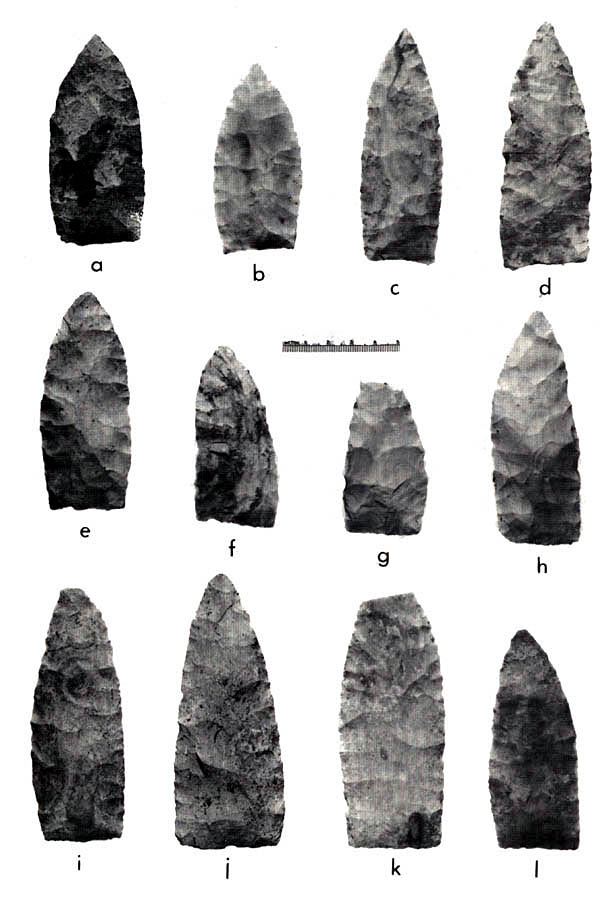 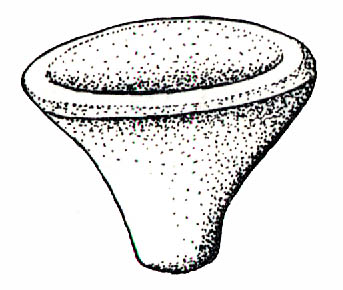 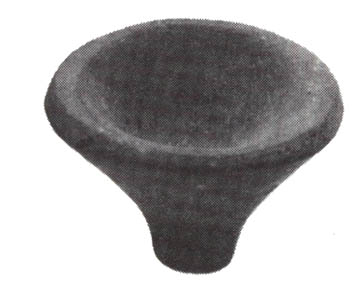 Drawing and scanned photograph of the mammiform artifact manufactured from gray calcareous quartzose siltstone; it was found a few inches away from the gorget. It is 34 mm high, and the oval top measures 45 by 38 mm. The depression extends 15 mm. This artifact is very similar to an artifact from the Trowbridge Site (14WY1), an archaeological site located near Kansas City, Kansas. 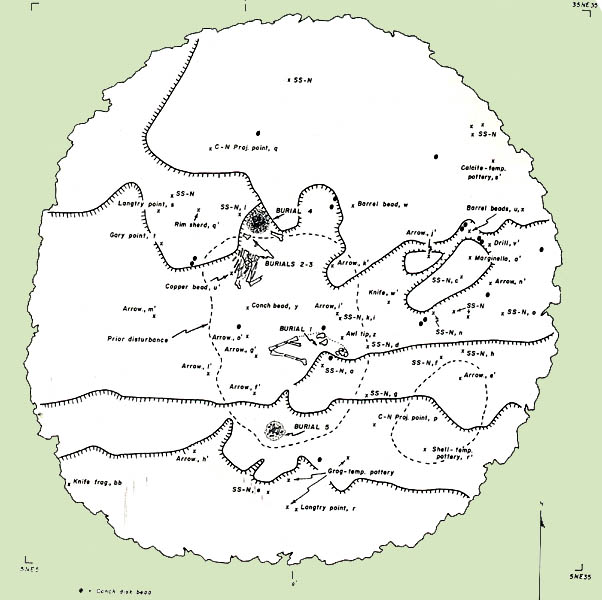 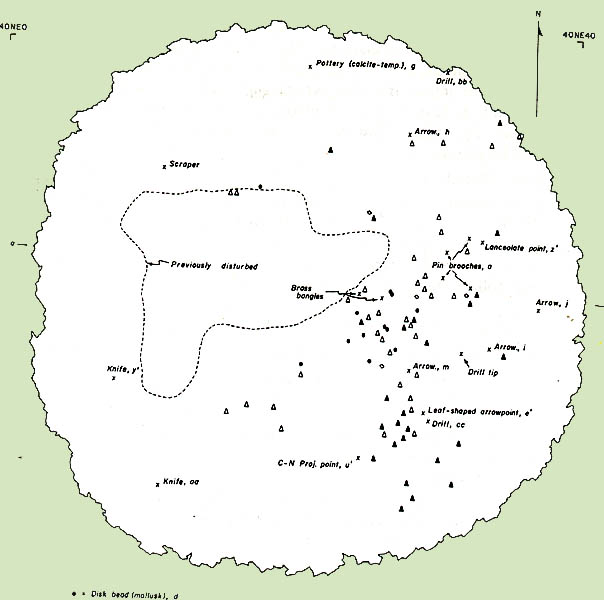 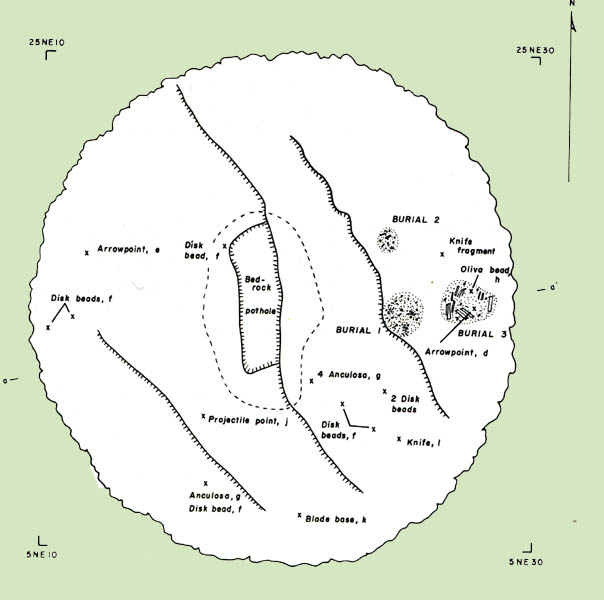 The jaguar gorget was discovered in 1958 by archaeologist W. Raymond Wood and Rolland E. Pangborn during excavations in what would become the Harry S. Truman Reservoir. The gorget was found in mound 2, a rock-and-earth fill Late Woodland mound within the Fairfield Mound Group in Benton County of southwest Missouri. The gorget, which measures 98 - 104 mm in diameter, is made from a Gulf Coast shell and is engraved with a unique jaguar design. The realism of the engraved jaguar is distorted only by its elongated body and the three-pronged "speech symbol" that projects from its mouth. The art style on the gorget is reminiscent of other Middle Woodland motifs engraved on bone, though the art is distinctive enough that it serves as the type specimen for what archaeologists Philip Phillips and James A. Brown (1978) called "The Fairfield Style." Most archaeologists today consider this gorget to be a Middle Woodland artifact that was curated and interred later by Late Woodland peoples. Images of jaguars are important elements in Mesoamerican art. However, there is no stylistic parallel with anything known in Central America. The gorget represents either the independent use of a jaguar motif, or some form of iconographic diffusion from Central America. some would prefer the former interpretation, since the historic range of the jaguar was far to the west and south of southwest Missouri. The image now serves as the symbol of the Northern Jaguar Project in Tucson, Arizona, and continues to be used as a state icon by Missouri archaeologists.


Special thanks to Professor W. Raymond Wood for his permission to create this webpage.