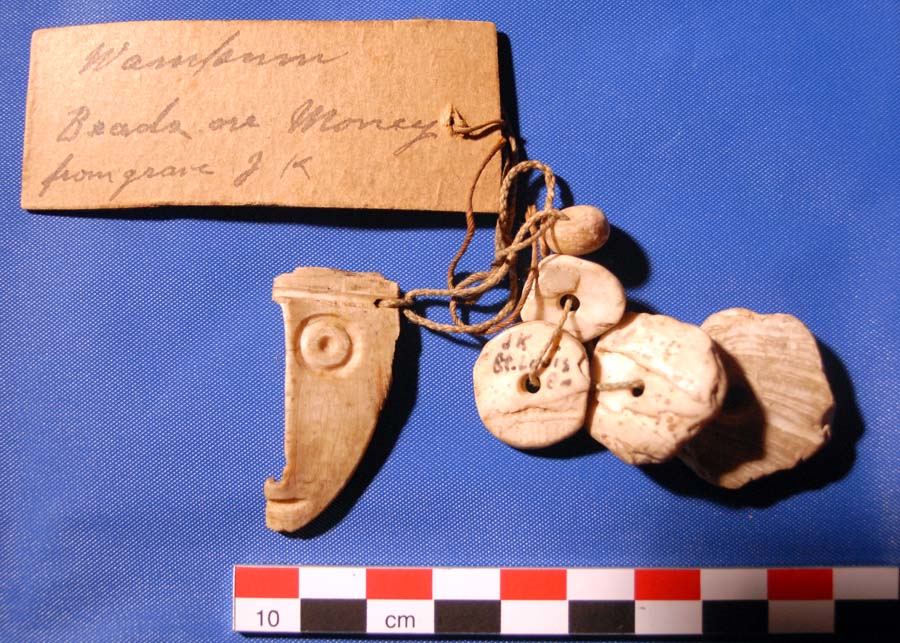 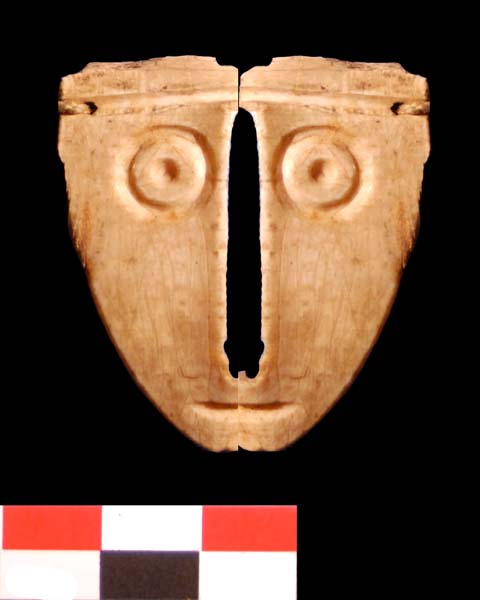 The private collection of John Krumm (initials JK on specimens in his collection) includes two significant artifacts discovered in the Meramec River drainage during the 1910s and 1920s. The most significant artifact is half of a Long Nosed God Mask carved from a piece of shell. The mask measures 4.0 cm in length and its original width can be estimated as 3.8 cm. It measures 2.4 mm thick. The nasal slot measures 2.7 cm in length. The goggle eye is 1.0 cm in diameter. The surviving fragment weighs 4.4 grams; the original amulet must have weighed approximately 9 grams. A visual comparison of the amulet from Indian Hill Mound with other Long Nosed God Masks can be found at the bottom of this webpage.

Side view of a Krumm pipe. The maximum length of the pipe is 17.0 cm. 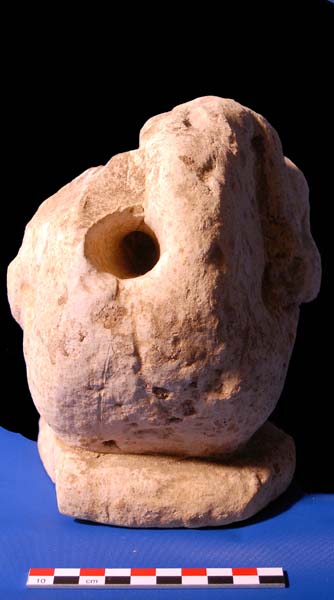 Back view of Krumm pipe. The maximum width of the Krumm pipe is 13.3 cm. 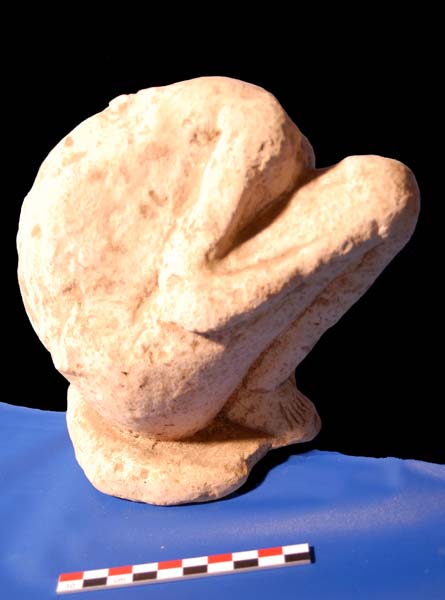 Side view of the Krumm pipe clearing showing an arm and leg. 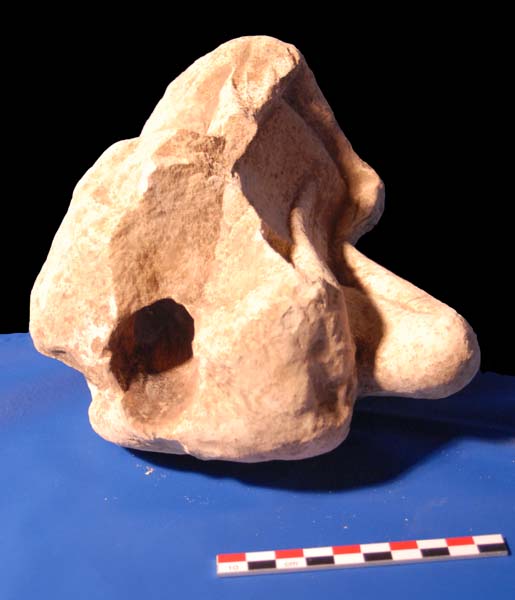 View of the Krumm pipe in the form of a crouching figure clearing showing the chamber to hold the tobacco.

Kelly (1991:Table 4.3) lists eighteen examples of Long-nosed God masks manufactured out of shell. Two specimens (Dickson Mounds in Illinois and Siouxland Sand and Gravel Site in Iowa) survive as half masks. Kelly (1991:78) notes that James Griffin (Smithsonian Institution) suggested that the Long-nosed God masks might be related to Yacatecuhtli, an Aztec deity associated with long distance traders called the pochteca (Griffin 1967:190). This interpretation is viewed as unlikely by Hall (1991:31). 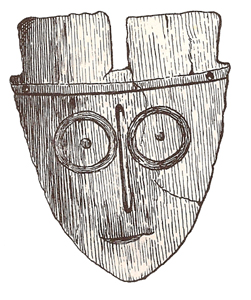 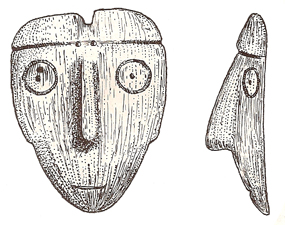 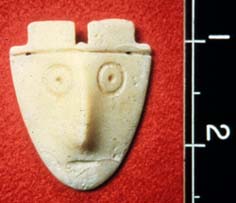 Long Nosed God mask, manufactured out of shell, from Yokum Mound, Pike County, Illinois. This artifact was excavated by Gregory Perino and is in the Gilcrease Museum collection; this image was provided by Professor John Kelley, Washington University. Reilly (2004:Figure 14) associates this artifact with the Winnebago tribe's oral tradition of "little faces with winking eyes" that were directly associated with male deity called Morning Star (also known as Red Horn or He-Who-Wears-Human-Heads-In-His-Ears).

Find context of the Long Nosed God Mask: Mr. Krumm was interviewed by Chris L. Murry, a the St. Louis Globe-Democrat newspaper staff writer. Mr. Krumm was 55 years old at the time of the interview. He reported that he had excavated at a mound, along the Meramec River, which was 25 feet above the surrounding land surface. He described the mound as containing numerous burials including group burials (three in one grave) and one feature that he describes as a roof of logs topped by flat stones. Mr. Krumm's indicated that the burials included several utensils of crude pottery and "strings of beads." [St. Louis Globe Democrat Magazine 24 June 1928, page 9]

Find context of the effigy pipe: Mr. Krumm told the St. Louis Globe Democrat reporter that the " momentous pipe of peace... came from the big mound on Indian hill. It is of limestone of a soft grade and carved in the figure of a crouching man, with a hole in the back for fit the stem and a place in his head for the kinnikinick [Algonoquian word for a mixture of tobacco and bearberry]. ...Sturdy must be the man who smoked it for any length of time, for it weighs a full 12 pounds and is too awkward to be held in the hand. It seems the Indian custom was to set it on a stone between them and each put in his own stem, in turn." [St. Louis Globe Democrat Magazine 24 June 1928, page 9]

What happened to the site? It is possible that Indian Hill is the same as ASM sites 23SL44 or 23SL84. Both sites have been destroyed by residential and commercial developments.

Kelly, John E.
1991 Cahokia and Its Role as a Gateway Center in the Interregional Exchange in Cahokia and the Hinterlands: Middle Mississippian Cultures of the Midwest. Edited by Thomas E. Emerson and R. Barry Lewis. University of Illinois Press, Urbana.