Chapman (1975:243-4) notes that Clovis fluted points are found throughout Missouri and specifically notes that the greatest number of Clovis points have come from the Lower Missouri River Valley and the Greater St. Louis area. The diagnostic feature of this artifact is the "flute" flake removed from the base of the point. Chapman notes that length ranges from 25 to 150 mm with the average of 65 mm; thickness ranges from 3 to 10 mm. DeRegnaucourt (1991:1 - 5) notes that this artifact type is found in all counties in Ohio and Indiana; he summarizes measurements from eleven specimens: Length = 28 to 80 mm, width = 20 to 32 mm, thickness = 5 to 9 mm and weight = 4.8 to 24.6 grams. Chapman associates an example from Rodgers Shelter with a radiocarbon date of 8580 to 8250 BC; this date is slightly "younger" than usually associated with Clovis culture. Morrow (1984;12 - 13) notes that Clovis points are recovered across many parts of Iowa; Clovis points from eastern Iowa were typically manufactured out of Burlington chert. Sandstrom and Ray (2004:36) cite a radiocarbon date of 8760 BC +/- 85 for a Gainey Point from the Big Eddy site; they place the Gainey point type as immediately after the Early Paleo-Indian Period when Clovis points were manufactured. 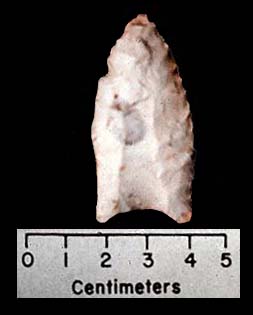 Resharpened Clovis point from the surface of 23GR185 along the James River in the collection of the Center for Archaeological Research at Missouri State University.