Chapman (1975:308 - 309) notes that Cahokia Notched points are found in the Ozark Highland Region and in the St. Louis area. He notes that length ranges from 20 to 35 mm and associates this points type with the Mississippi Period from AD 900 to 1450. Morrow (1984:86) observed that are uncommon in Iowa. Sandstrom and Ray (2004:31) discusss the minimal differences between Cahokia points (three notched) and Huffaker (three prominent notches and serration-like notches along the sides of the stem). 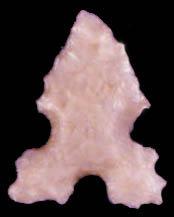