A pictograph site along the Osage River was noted as early as 1882. The pictographs were described by Gerard Fowke in his 1910 report on fieldwork in Missouri; his research was sponsored by the St. Louis Society of the Archaeological Institute of America. 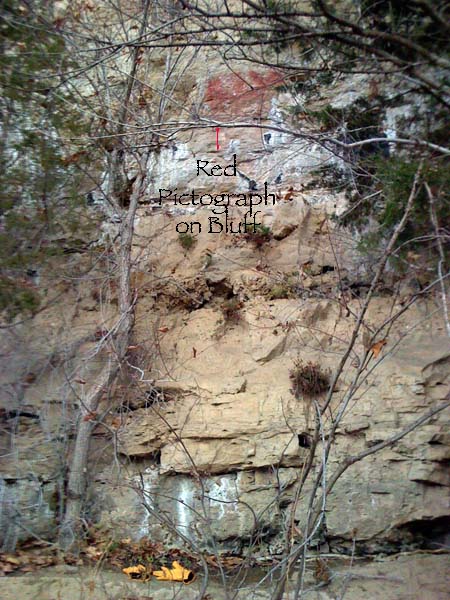 Prof. Michael Fuller relocated the site during November 2007 and confirmed one prominent, red painted image located approximately 5 meters above a narrow ledge along the bluff face. Fowke (1910:81-82) reported that the site included "a so-called 'buffalo,' a design resembling a man with upraised arms, and several others too nearly obliterated to venture a guess as to their meaning." The Archaeological Survey of Missouri report on the site indicates that the weathering of the bluff face had resulted in the loss of an image of an "Indian Maiden" by the 1940s. 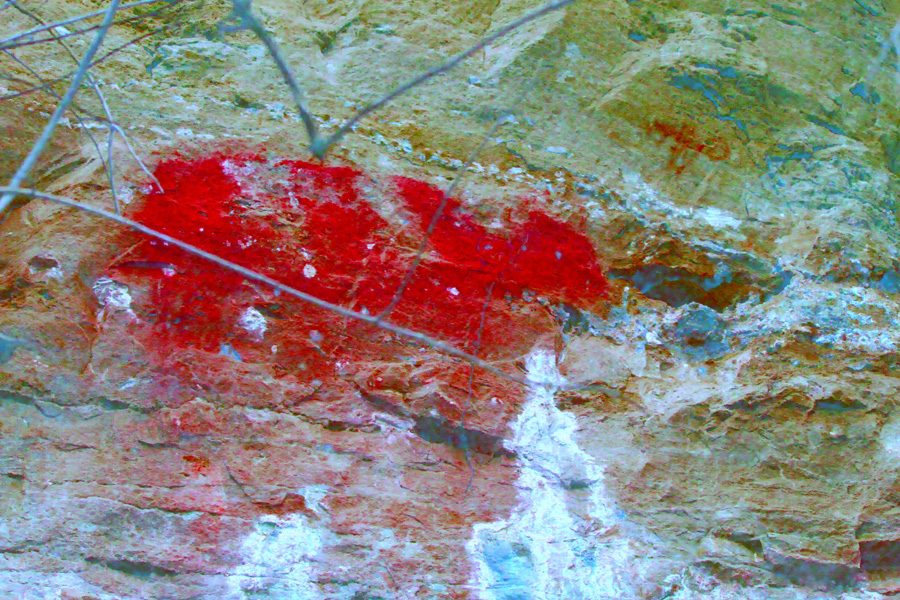 Alan Westfall and Jason LeCure relocated the large pictograph in March 5, 2021. DStretch image using YWE filter. Alan recognized a faint pictograph above and to the right of the bison. Photograph by Alan Westfall. 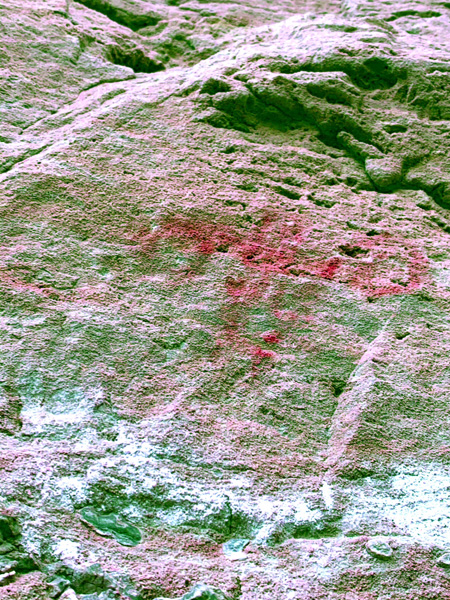 Dstretch of Alan Westfall's photograph of the faint pictograph situated above and to the right of the bison. This pictograph may have been the one referred to by Fowke as a man with upraised arms. 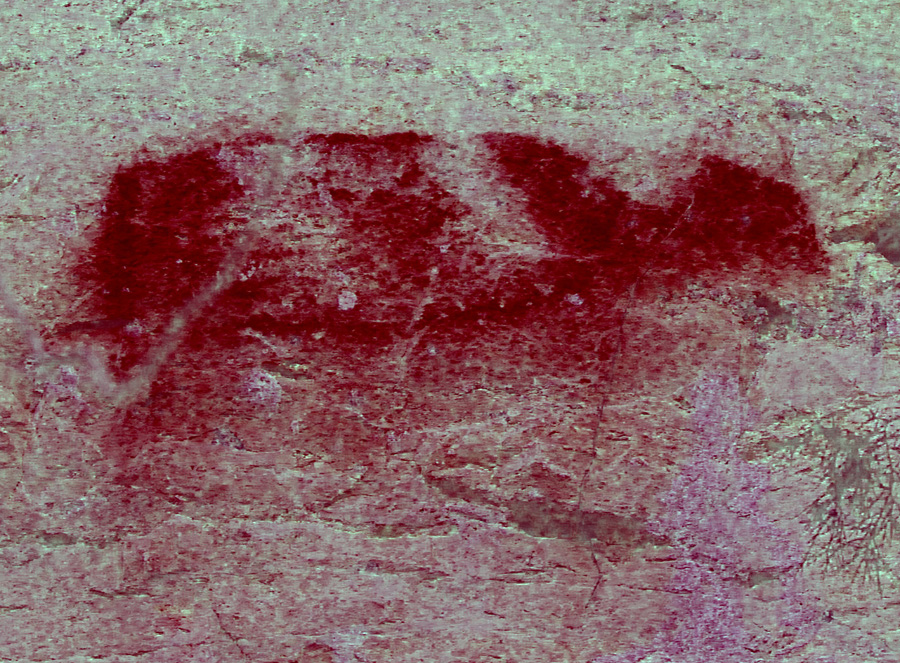 Alan Westfall photograph of the bison processed with DStretch filer yre. The horn's are faint, but visible. LaFlesche (1932:157, 188, 238) records the Osage words wadsuta shinto zhinga (young buffalo bull), wadsuta tonga (the great animal; the buffalo bull), and tse as a generic term for bison but also the specific term for a buffalo cow; he noted that bison "figured prominently in the myths and tribal rites of both the Osage and Omaha nations." 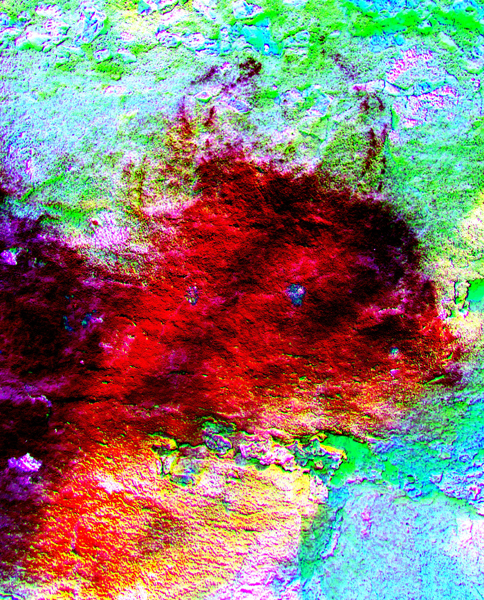 The 1882 reference, quoted in Fowke (1910:81), describes the buffalo image as 15 inches long and 8 or 9 inches high. Alan Westfall climbed up a tree to the ledge and measured the bison image as 36 inches (91 cm) in length and 28 inches (71 cm) high. The size discrepancy might suggest that Fowke was relying on second hand information versus first hand observation. 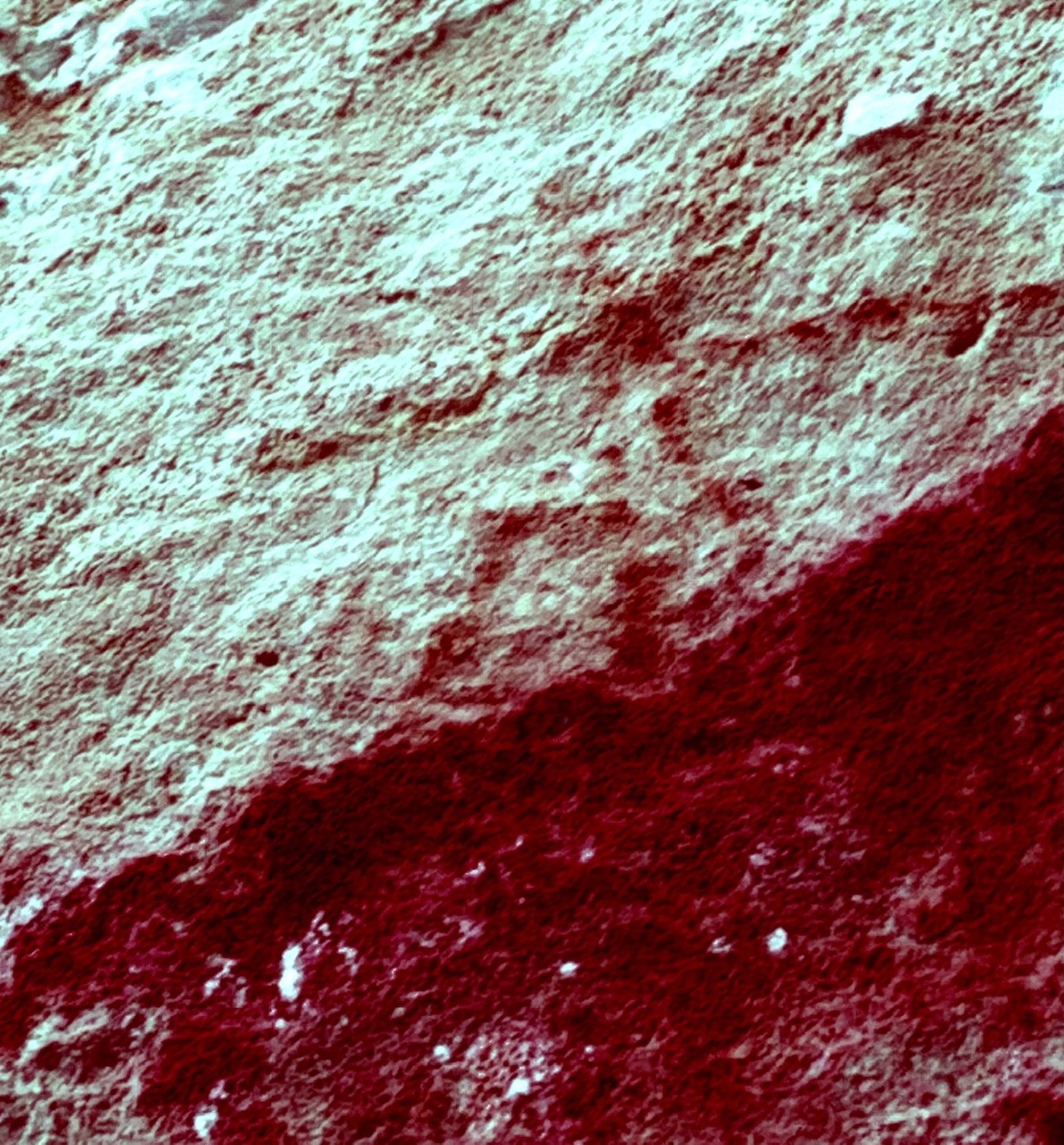 Closeup of a problematic design on the center of the back of the bison. Suggested identifications include a star, a parasite eating cowbird, or the frame of a tipi. 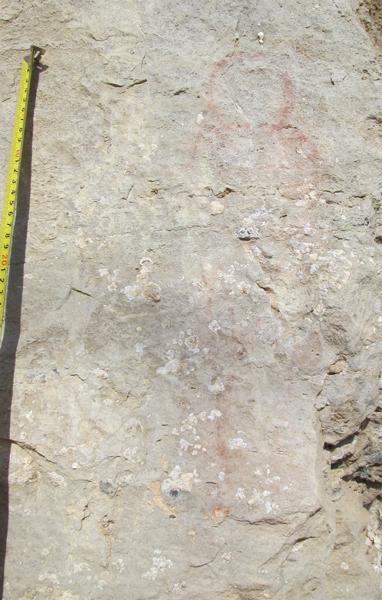 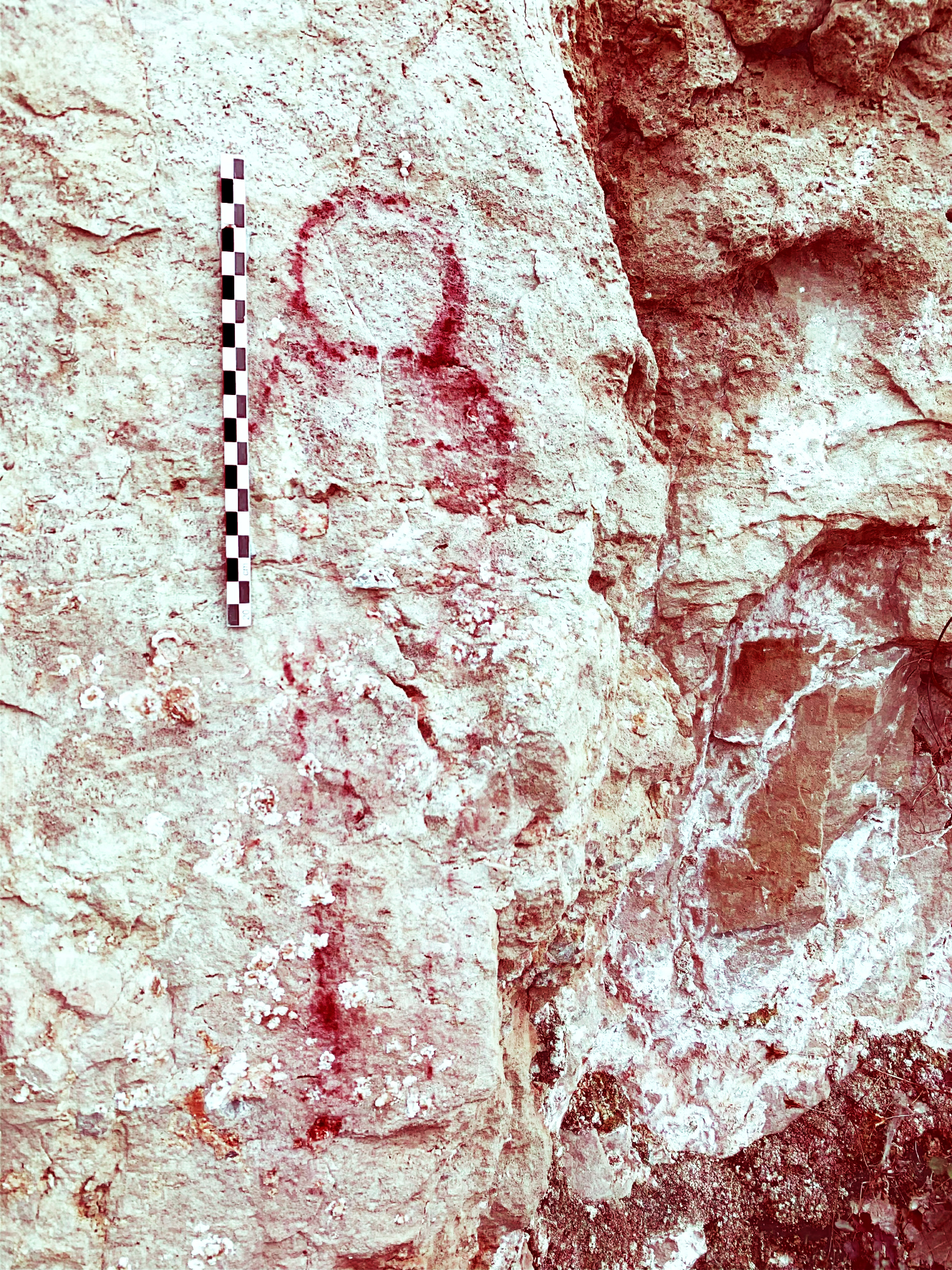 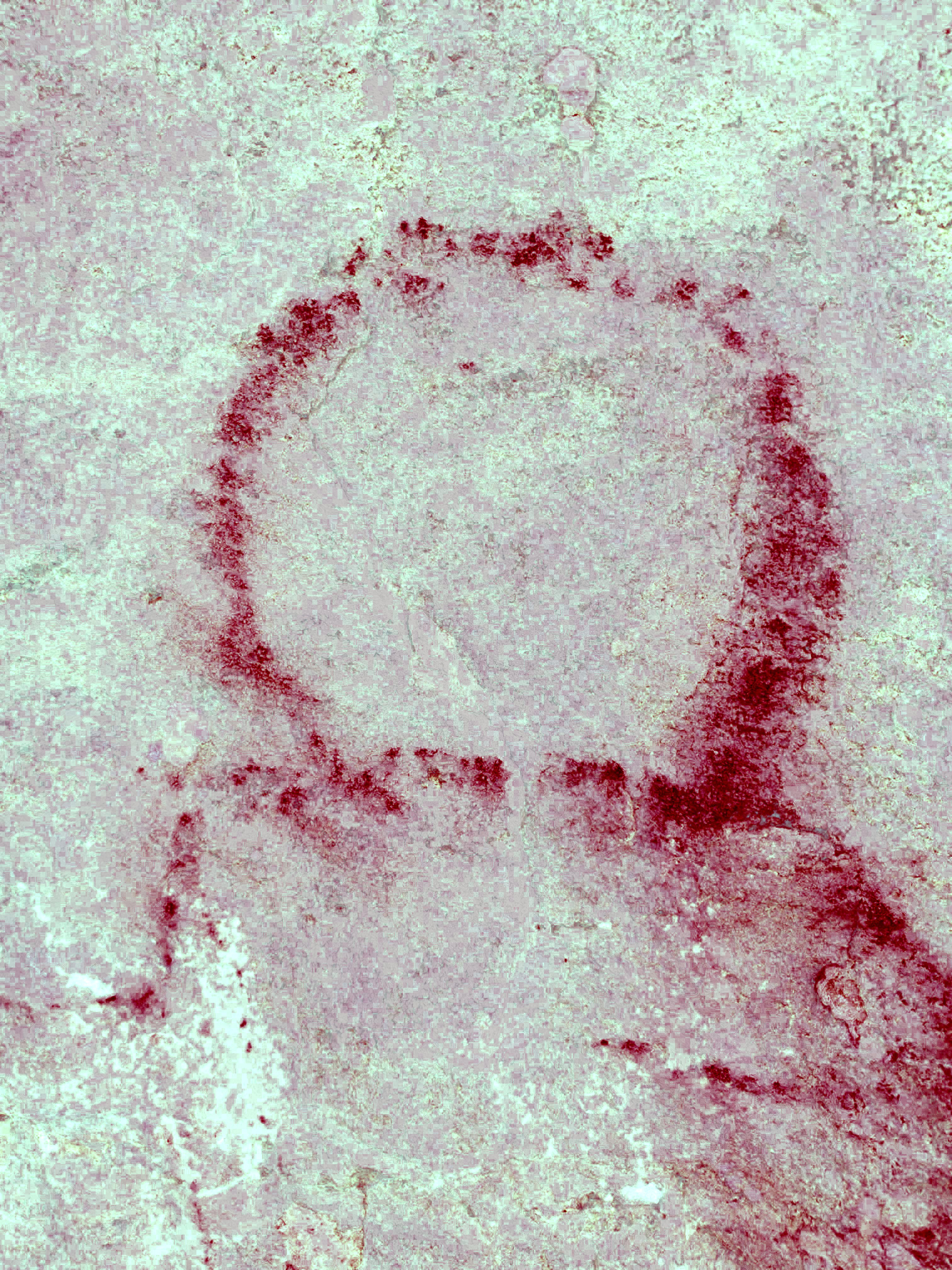 Normal image and dStretch (filter yrd) of an outlined form that might have been the "woman" image referred to by Fowke. Photographs by Douglas Porter, Alan Westfall and Eric Fuller. Scale is 20 cm. This is situated on the same ledge as the bison pictograph at a point approximately 30 meters upstream of the bison. 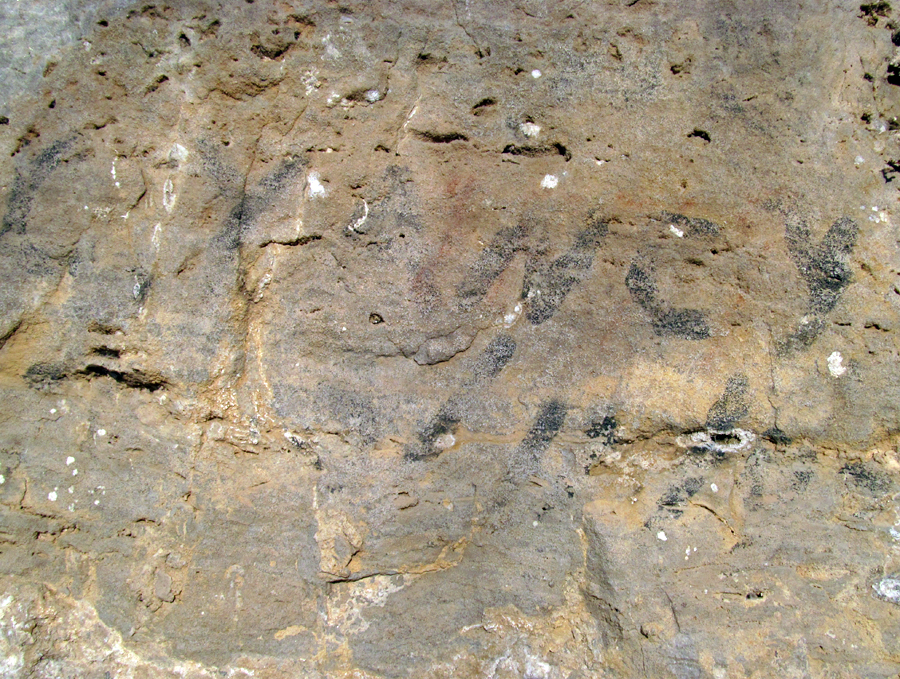 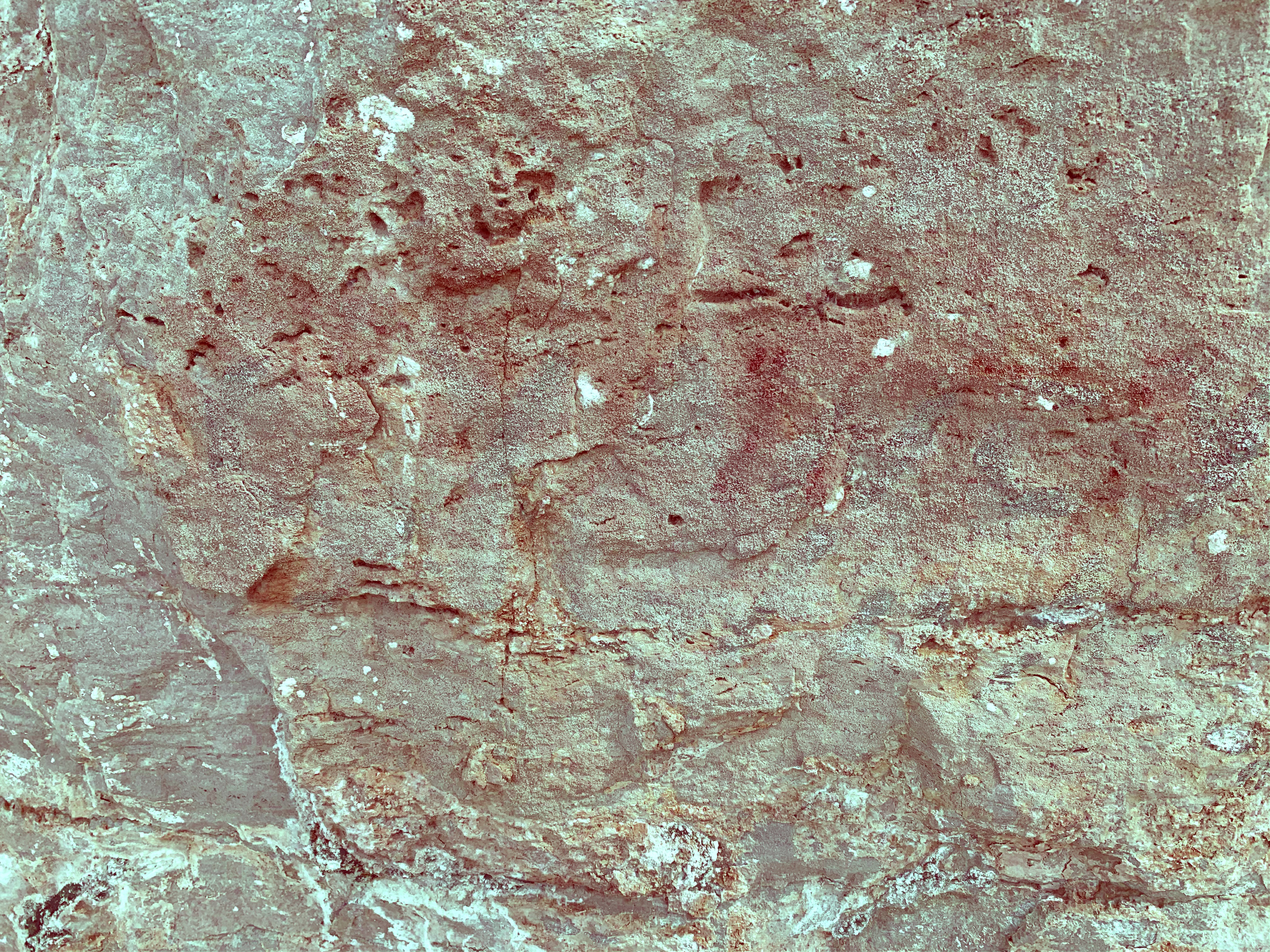 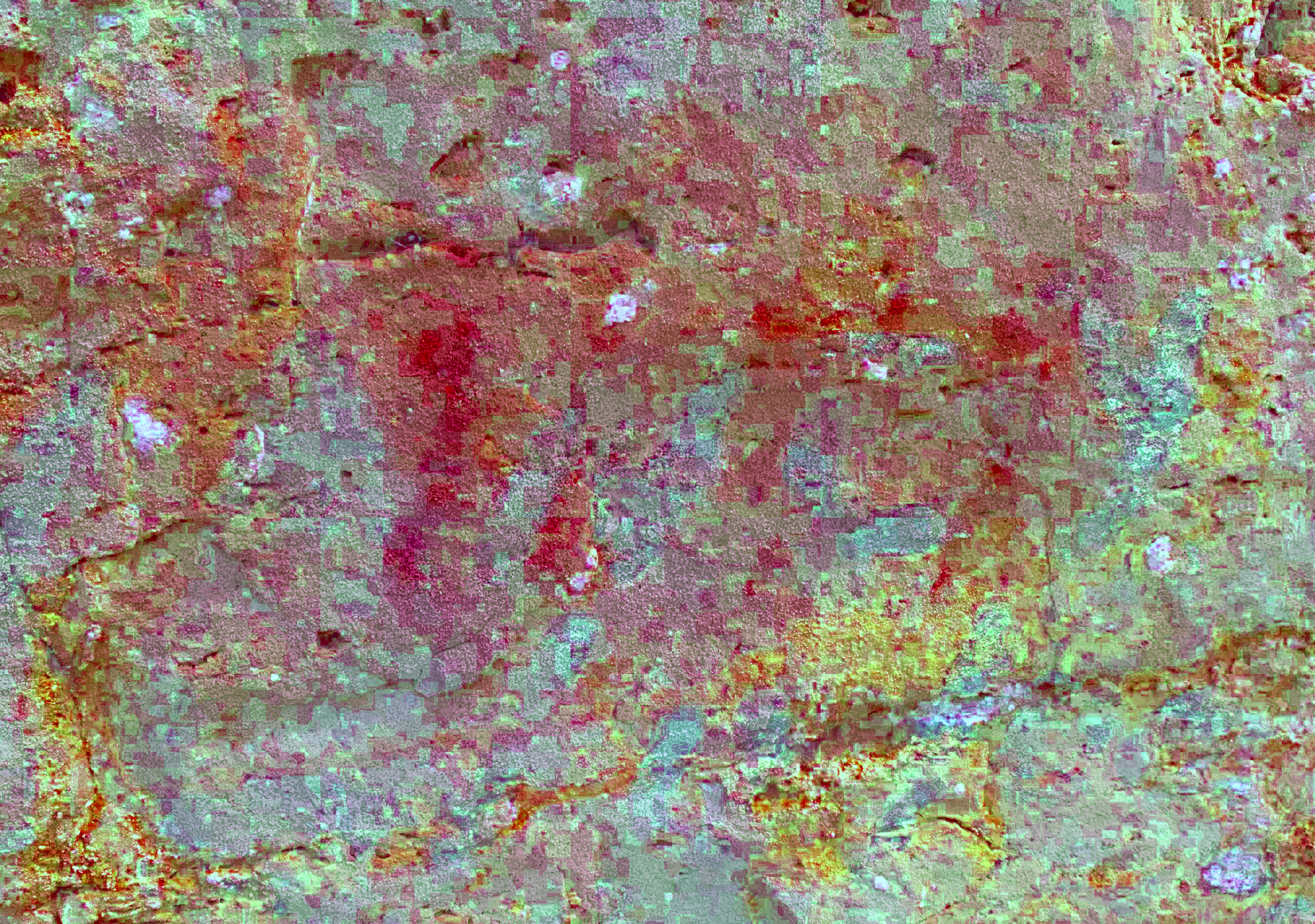 Normal image and dStretch (filter yrd) of historical graffiti painted long ago over 4 red pigment pictographs. The pictographs "appear" to be four figures holding hands and dancing or running. One figure may hold a staff. It is problematic pictograph even with dStretch. Dancing figures with staffs are found at the Salt River Pictograph site in Northeast Missouri. The 4 pictographs of dancers/runners is situated on the same ledge as the bison pictograph and outlined "woman" image. 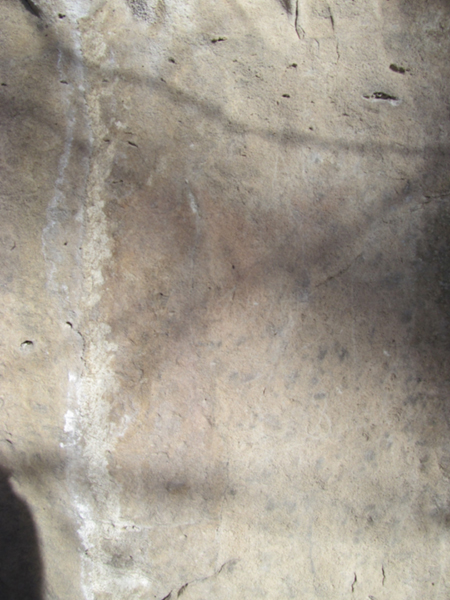 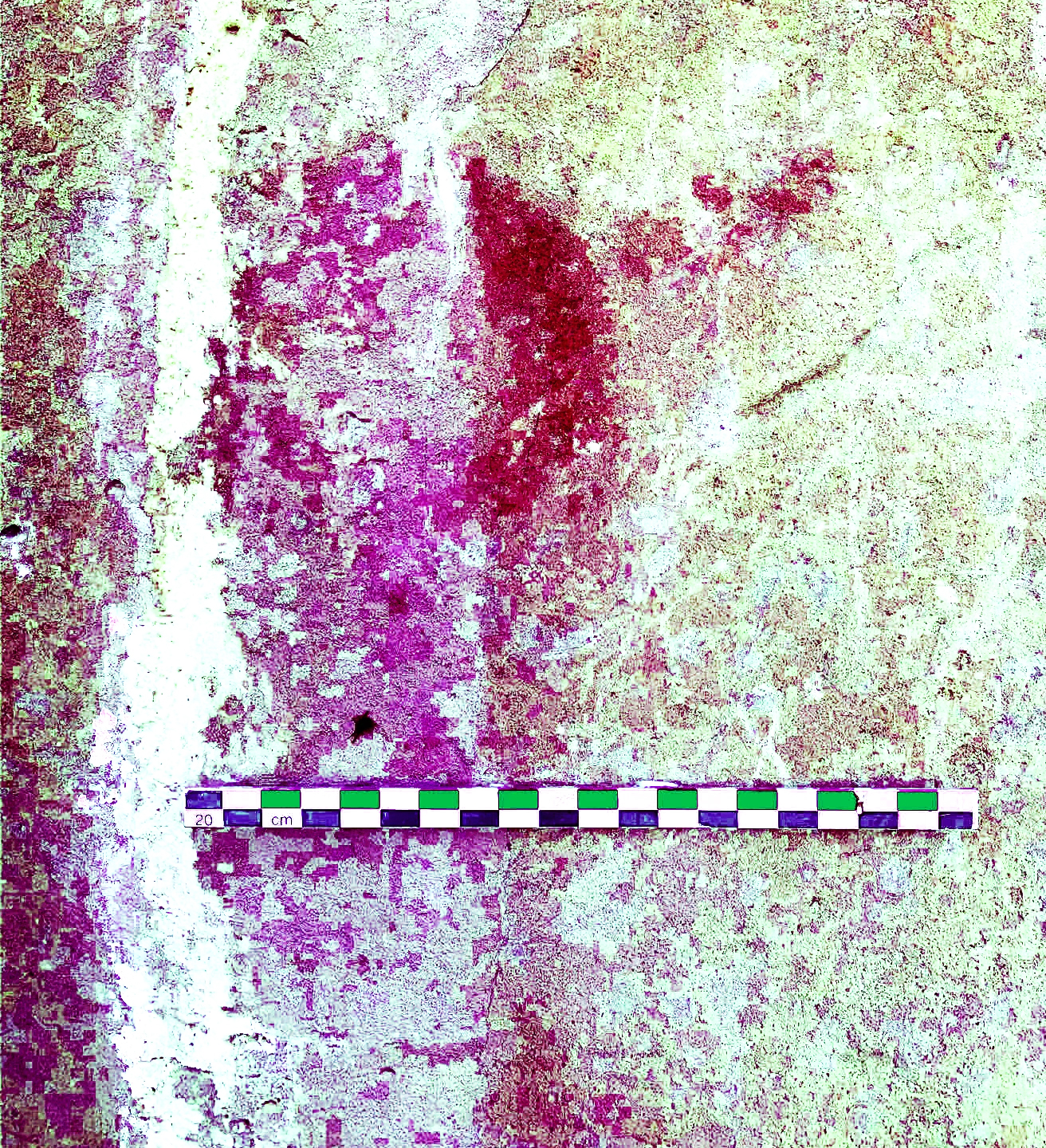 Normal image and dStretch (filter yrd) of feather wearing individual. Photographs by Douglas Porter and Alan Westfall. Scale is 20 cm. The bust measures 20 cm tall and the feather extends 9 cm. This is found 23 meters below the bison pictograph at a point very close to the top of the talus slope and the bluff. 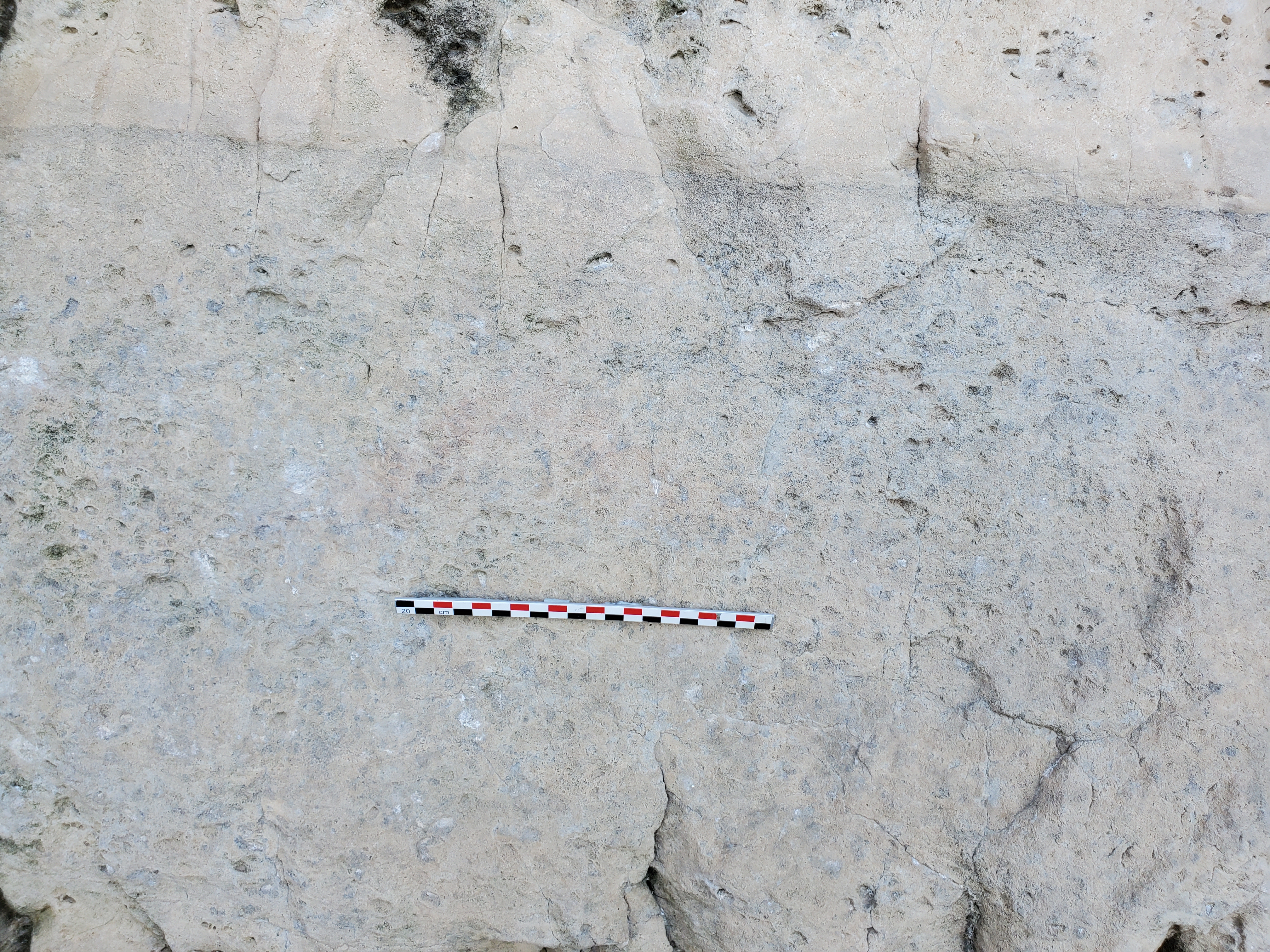 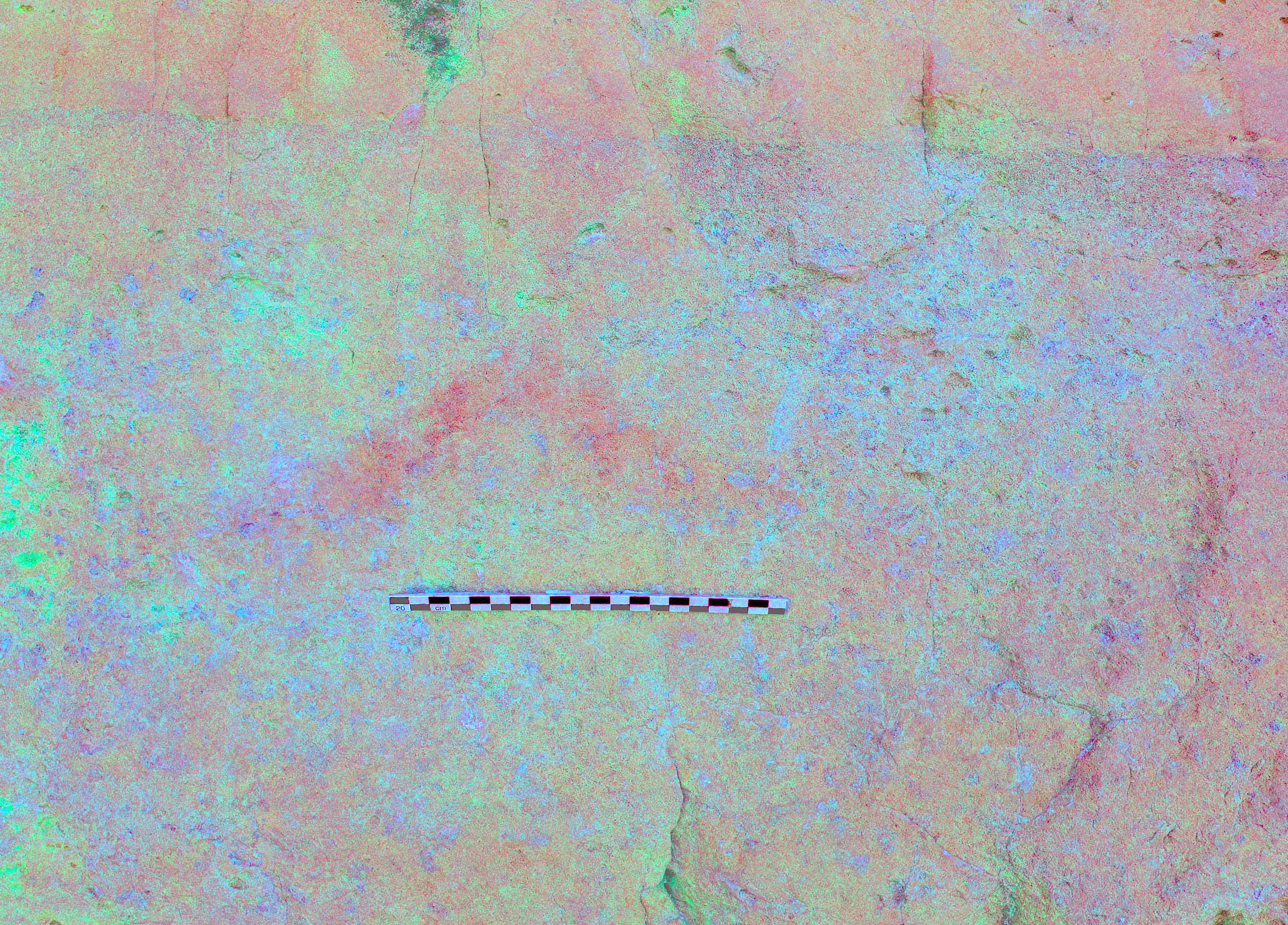 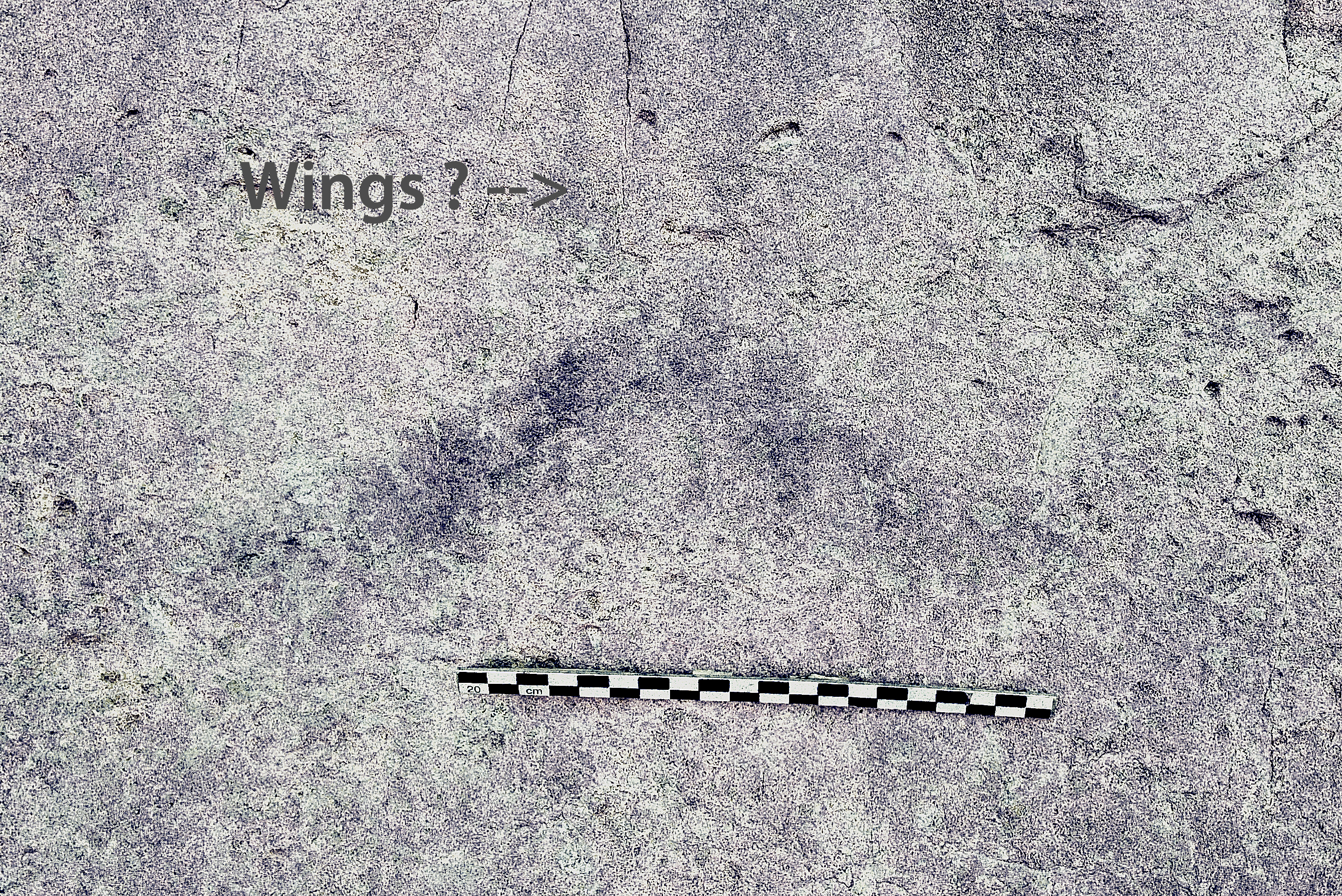 Normal image and dStretch (filter lre) of a very faded serpent; image taken by Eric Fuller. Scale is 20 cm. The serpent measures 3 cm in width and stretches 25 cm. long. Dr. Gary Rex Walters and Doug Porter saw the wings more distinctively on their visit the site (personal communication 12 April 2021). This pictograph is on the same bluff face as the bust with feather and vulva pictograph. 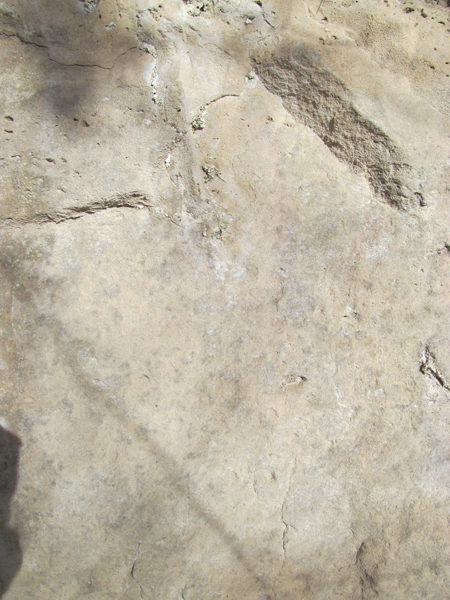 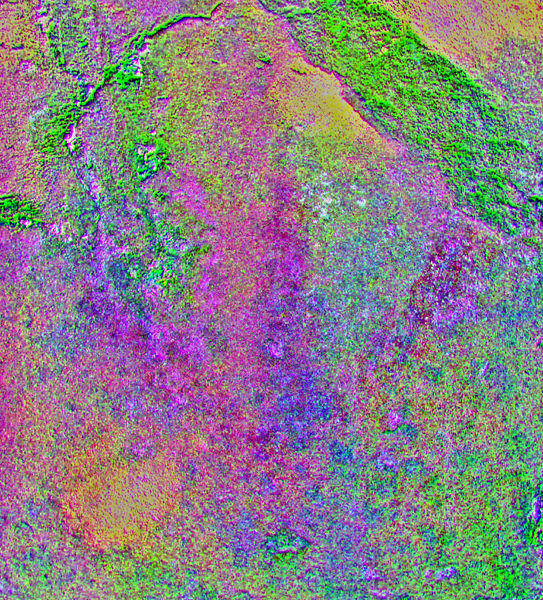 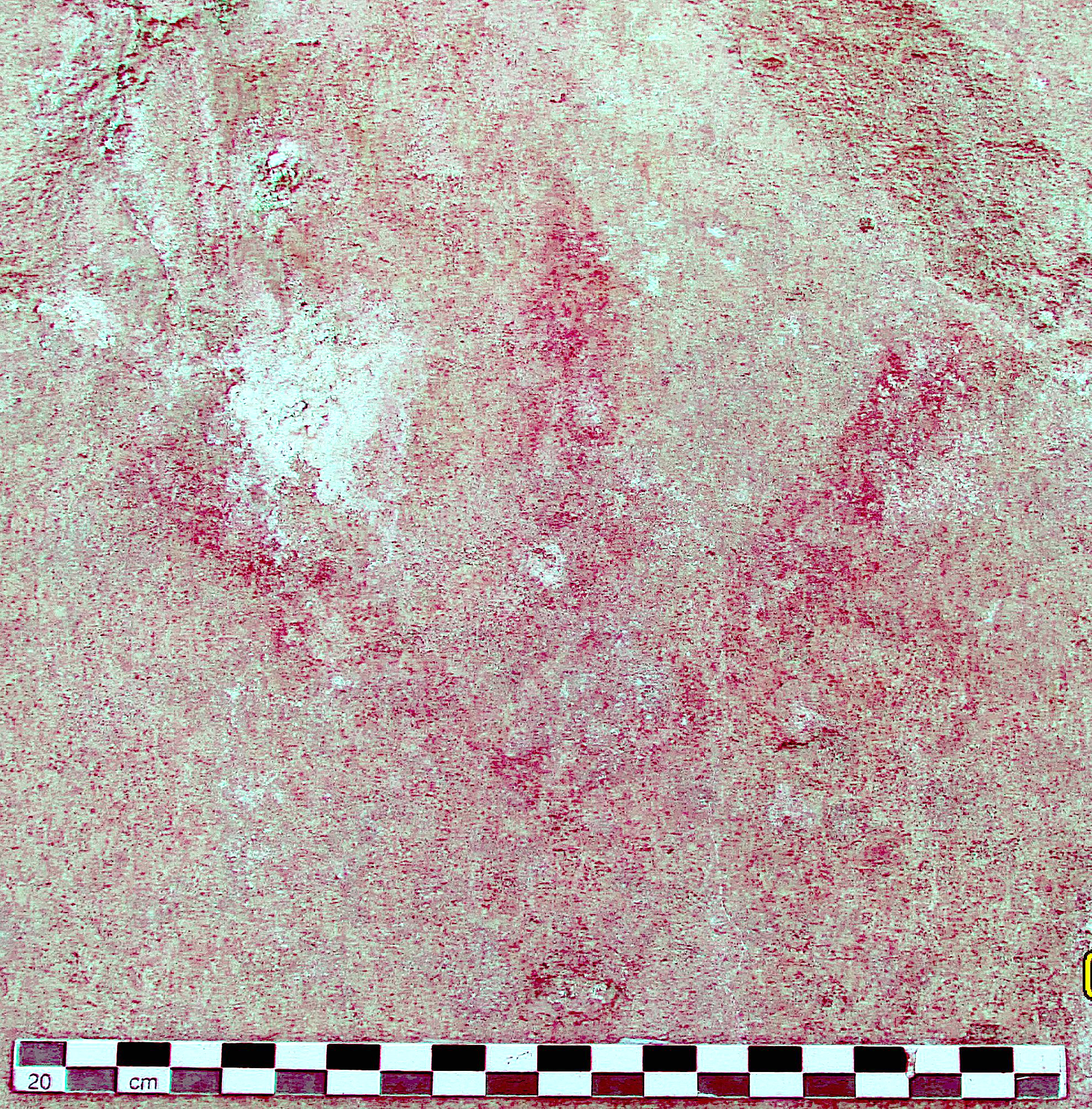 Normal image and dStretch (filters FLT and VRE) of a very faded vulva-form. Photographs by Douglas Porter and Michael Fuller. Scale is 20 cm. The vulva measures 15 cm tall and 23 cm wide. This pictograph is on the same bluff face as the serpent and bust with feather pictographs. 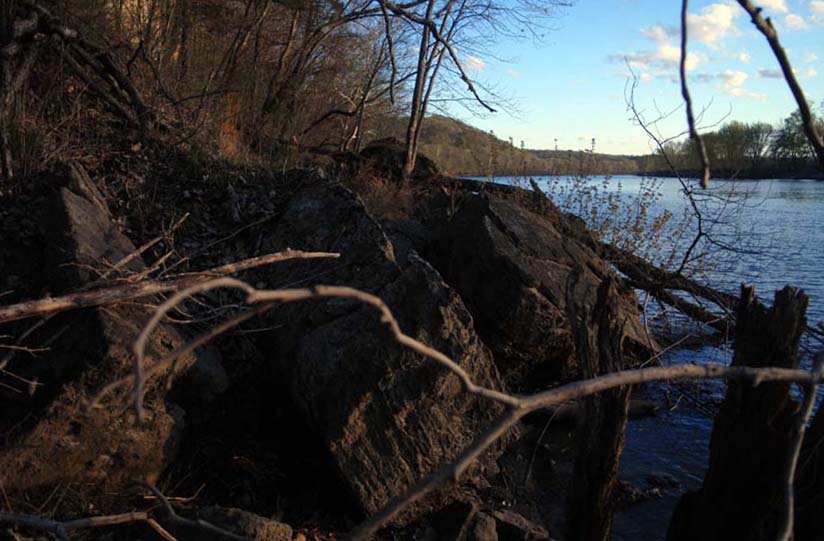 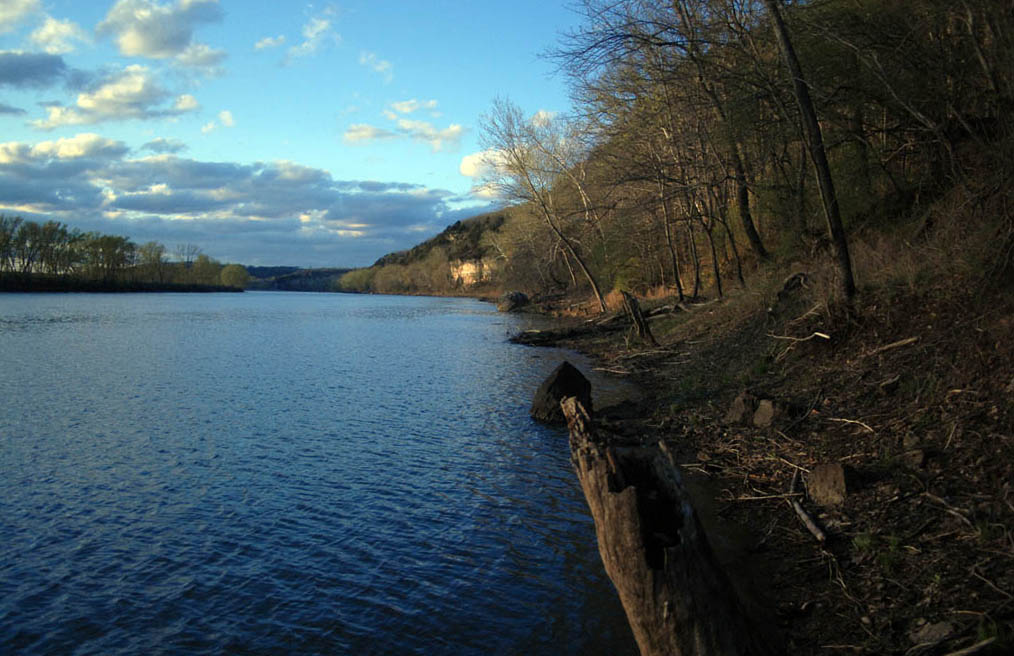 Two views of the Osage River in the general vicinity of the site taken in 2007. Painted Rock is located on property administered by the Missouri Department of Conservation. The site IS NOT accessible to the public because of the extreme risks of drowning, falling rocks and poisonous snakes. Photographs by Michael Fuller.

Special thanks to Neathery Fuller and Amira Fuller who patiently waited for hours while I relocated this site. Many thanks to Alan Westfall for following vague directions and relocating the site. It has been updated with DNR. 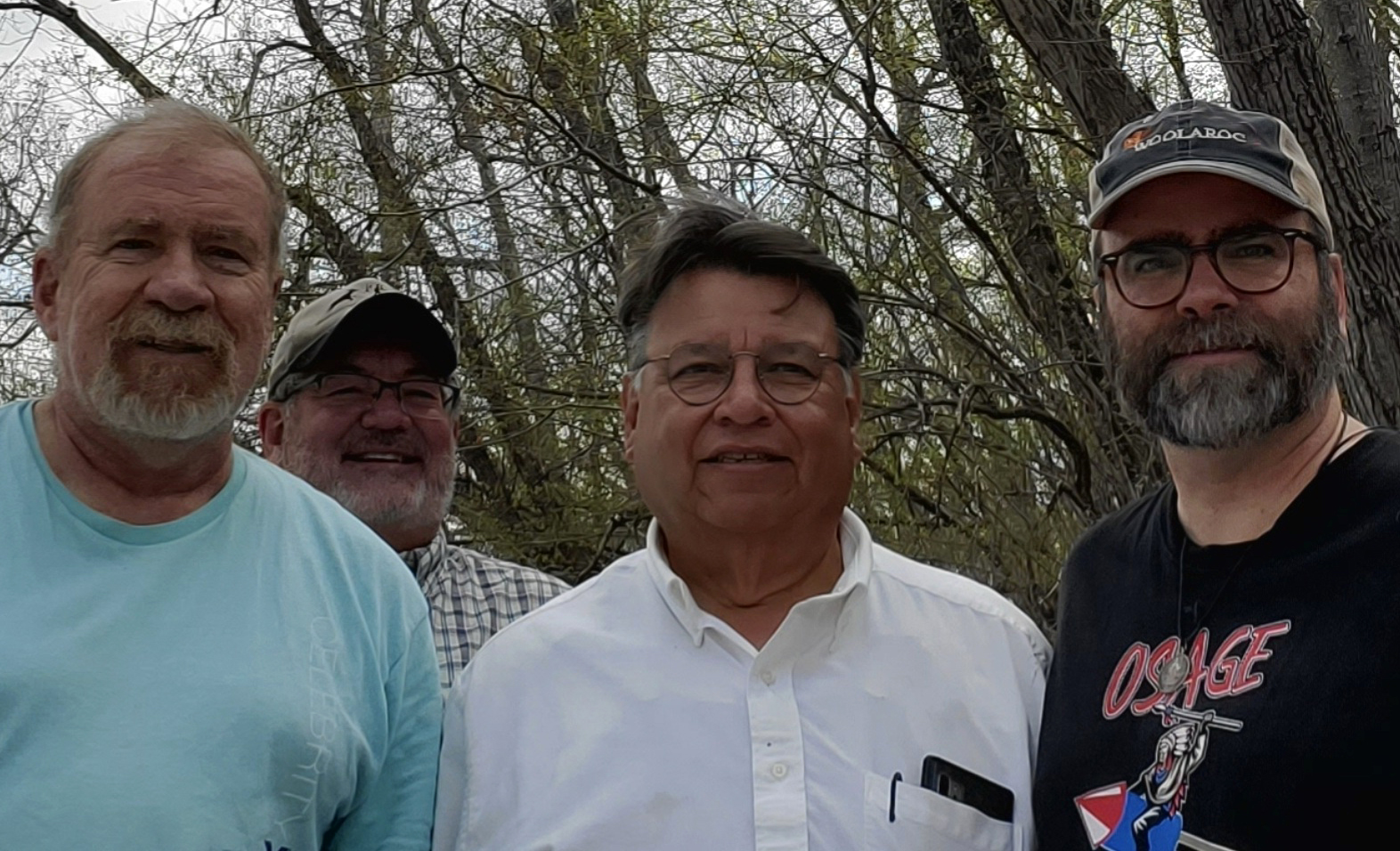