Cooking with clay pottery over coals at Pennsic 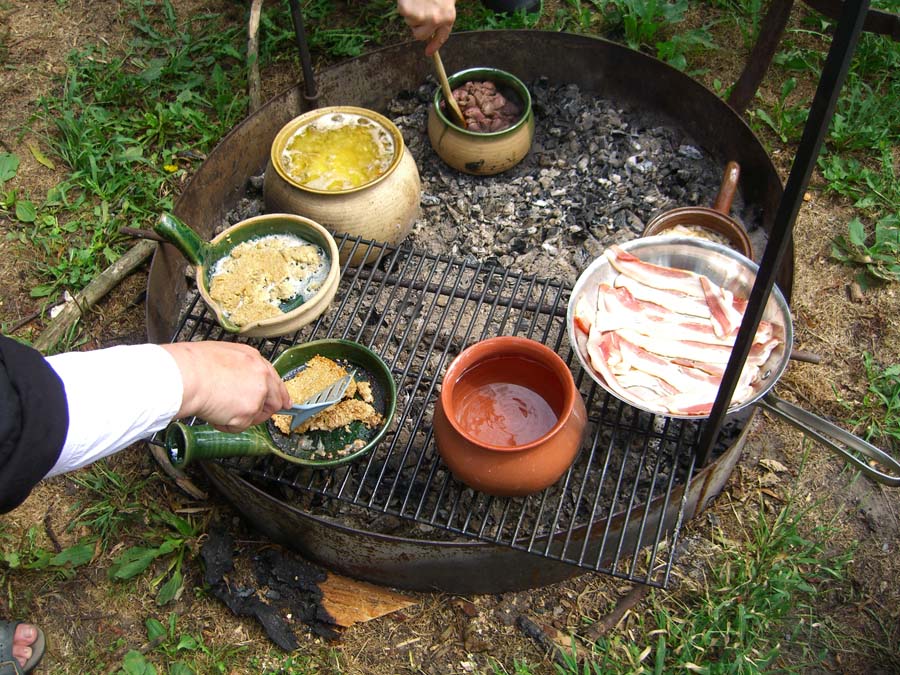 The three round bottom cooking pots and the green glazed frying pan with the hollow handle (where the oat cake is being turned) were manufacture by Mistress Honnoria (Gayle Erwin). 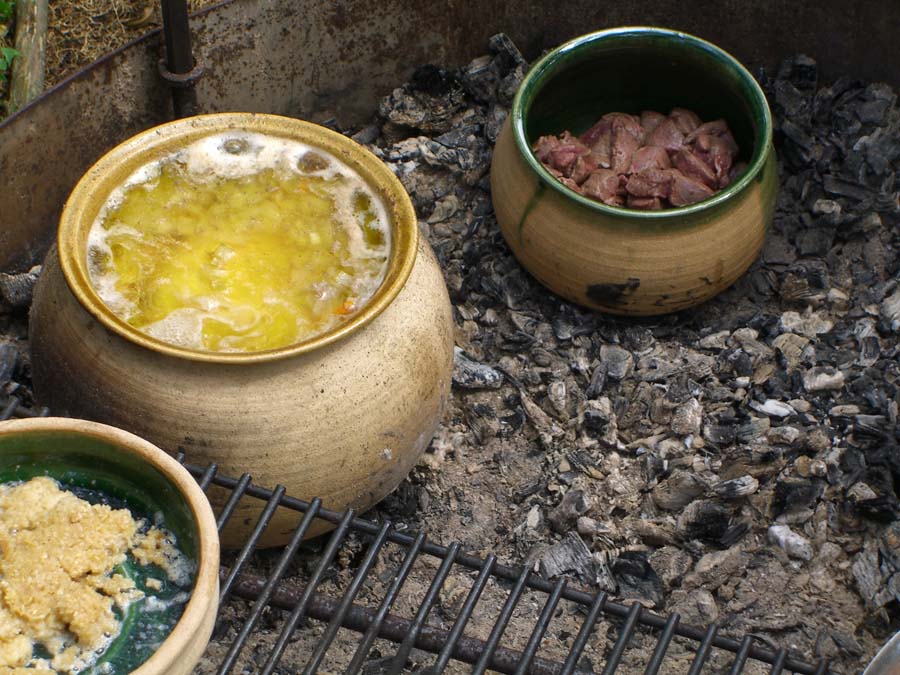 Chicken and broth simmers inside a handless cooking pot. Handles would have aided in turning the pottery. Sometimes the cooking pot would boil unevenly and would be turned. We feared that uneven heat distribution would cause the cooking pot to crack. None of the pottery cracked during cooking. The two round bottom cooking pots were manufacture by Mistress Honnoria (Gayle Erwin).

Oat cakes made from steel cut oats, salt, and water. soaked for 20 minutes, then formed into patties and fried. The frying pan on the right side was manufactured by Mistress Honnoria. 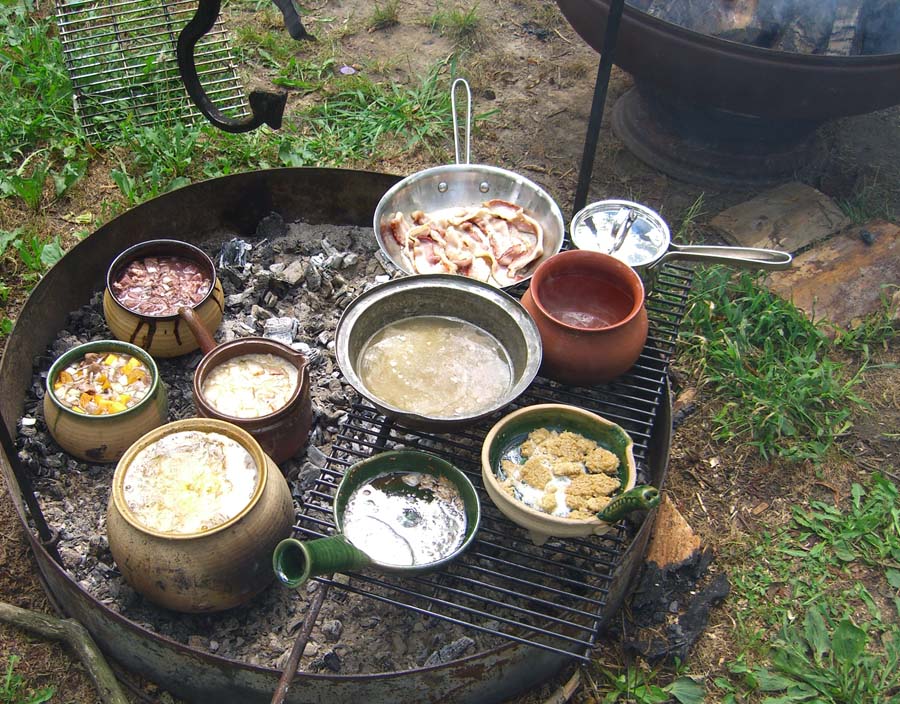 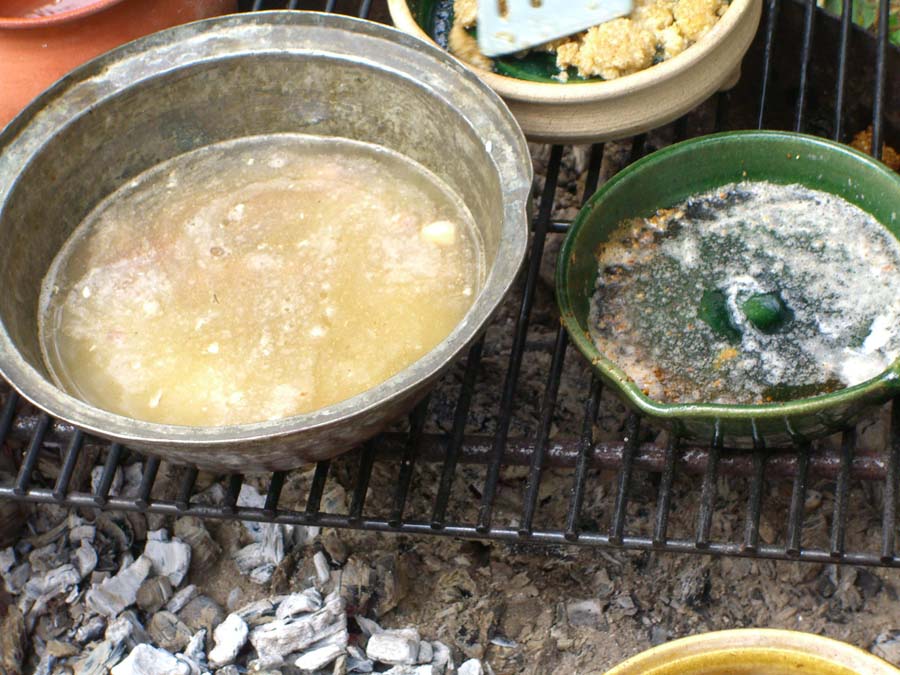 Michael of Safita used a metal vessel made out of copper with tin inner coating to prepare a simple Medieval style dish of meat, olive oil, choppped almond nuts, spices (cummin and corriander) and white rice. The cooking bowl is inverted onto its lid for serving. The metal cooker was purchased in Damascus and was specifically designed to cook Maqluba which means "upside down" in Arabic. Michael of Safita had eaten Maqluba in Jordan and Syria, but never attempted to prepare the dish until at Pennsic 2005. 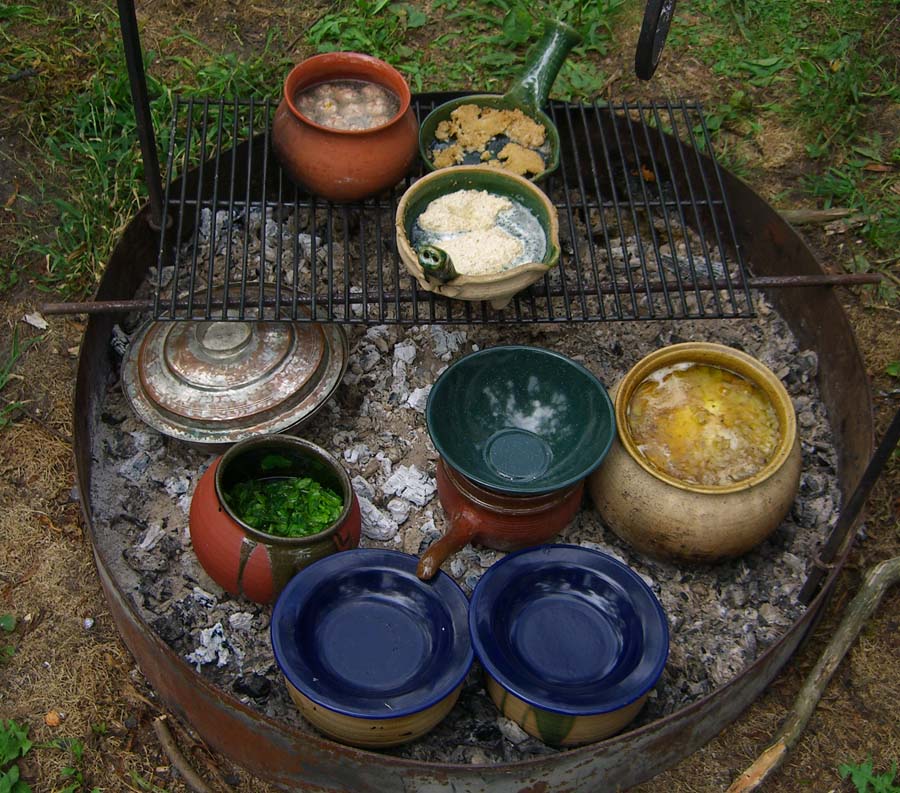 Spinach dish cooking in lower left corner. The spinach was prepared according to a recipe in the English Housewife. It was boiled, chopped, then seasoned with butter and currants. It was placed in a Pipkin (tripod footed frier) and cooked over the coals.

The round bottom pot that is brick red was made with clay dug locally to Pennsic, hand processed at home, then hand thrown. The glazes is a lead free cone 6 glaze. Mistress Honnoria developed the glaze herself and it got called Scott's green since he liked it so much. 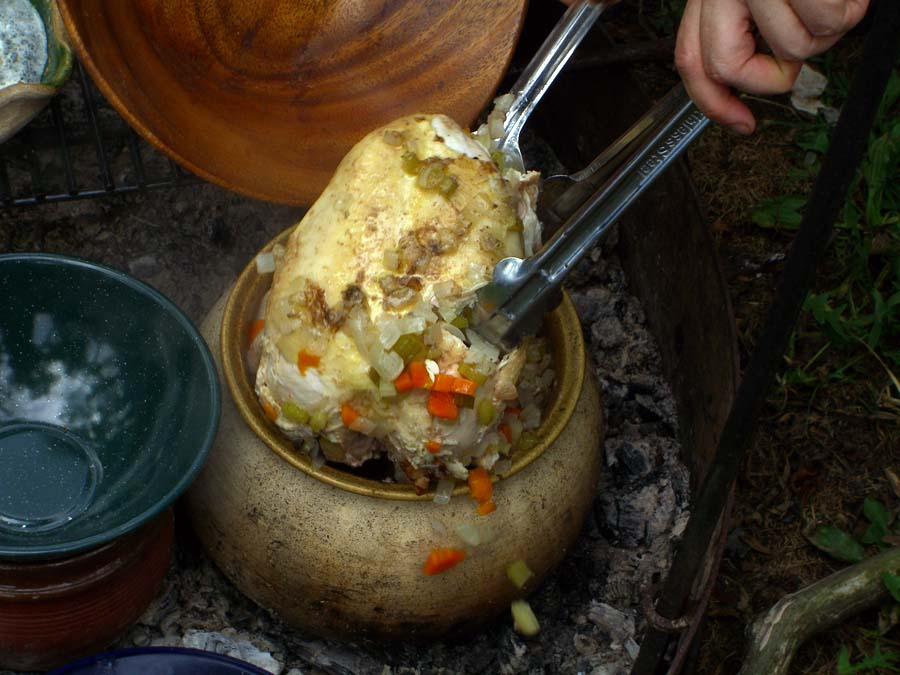 The chicken was cooked with black pepper corns, celery, onions and carrots. Fat, neck and heart were cooked in the pot, but the liver and gizzard was not cooked with the chicken.

Chicken was fully cooked and removed. Lentils were added to the broth and allowed to cook. These were served seperately from the chicken. 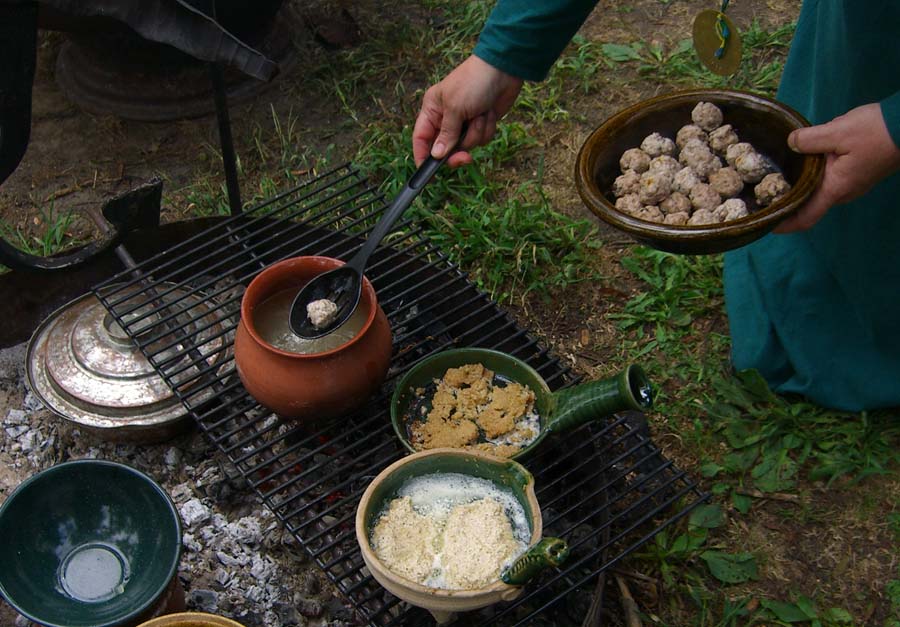 Raisins, apple cider vinegar, blend of spices used to coat pork. coated cubes in seasoning then put onto the coals to cook. Rolled in egg yolk and refried. 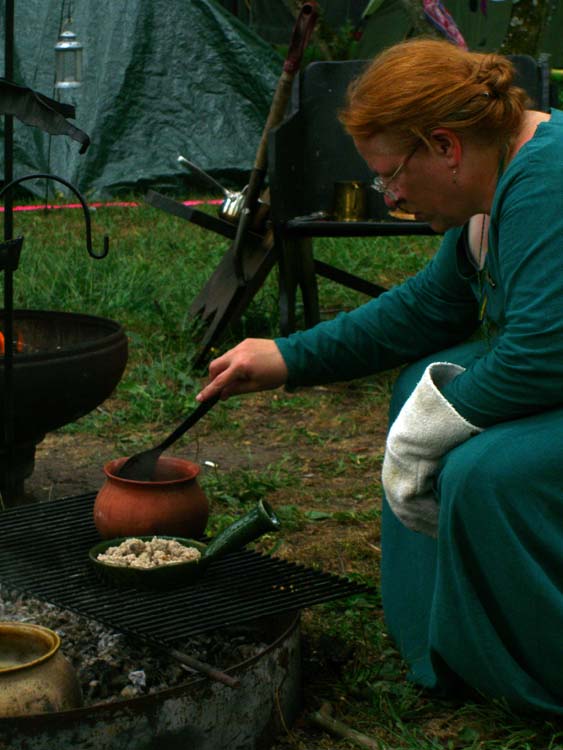 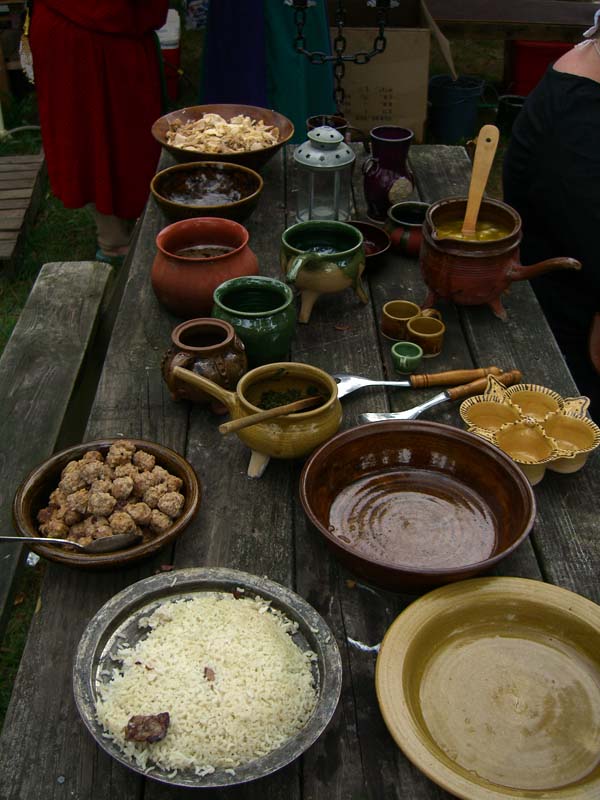 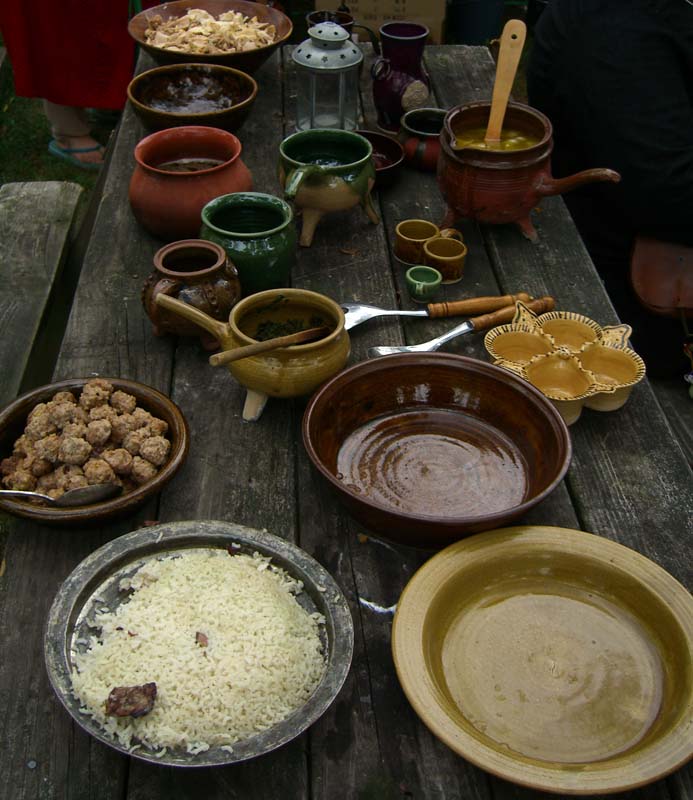 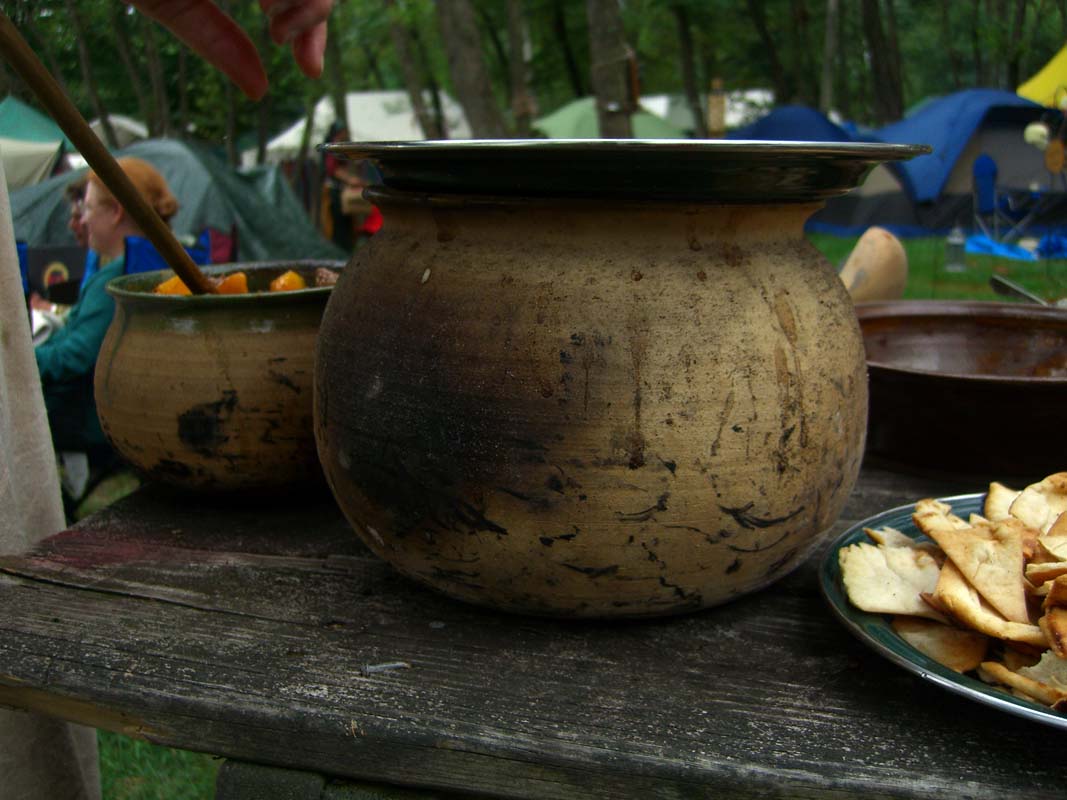 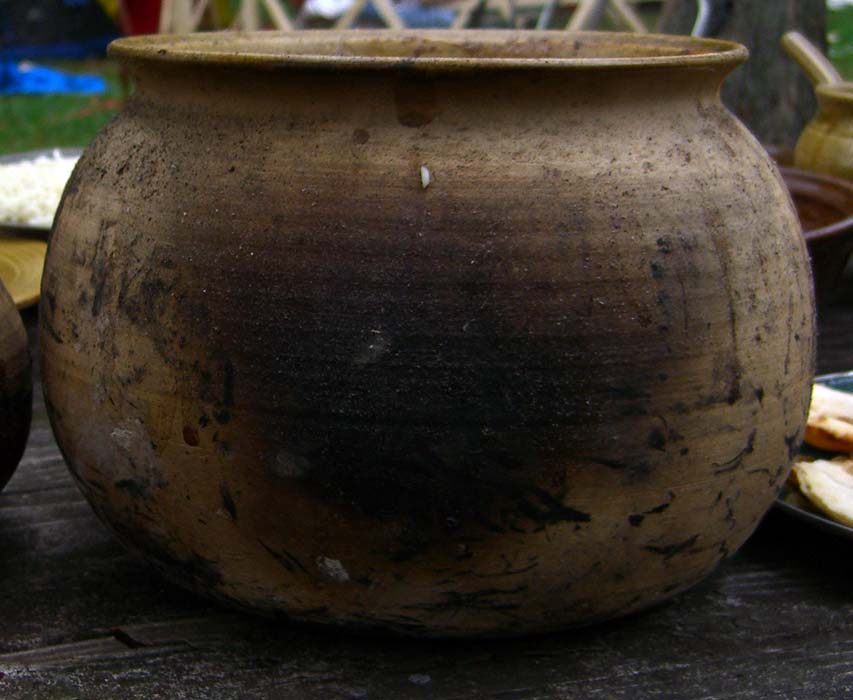 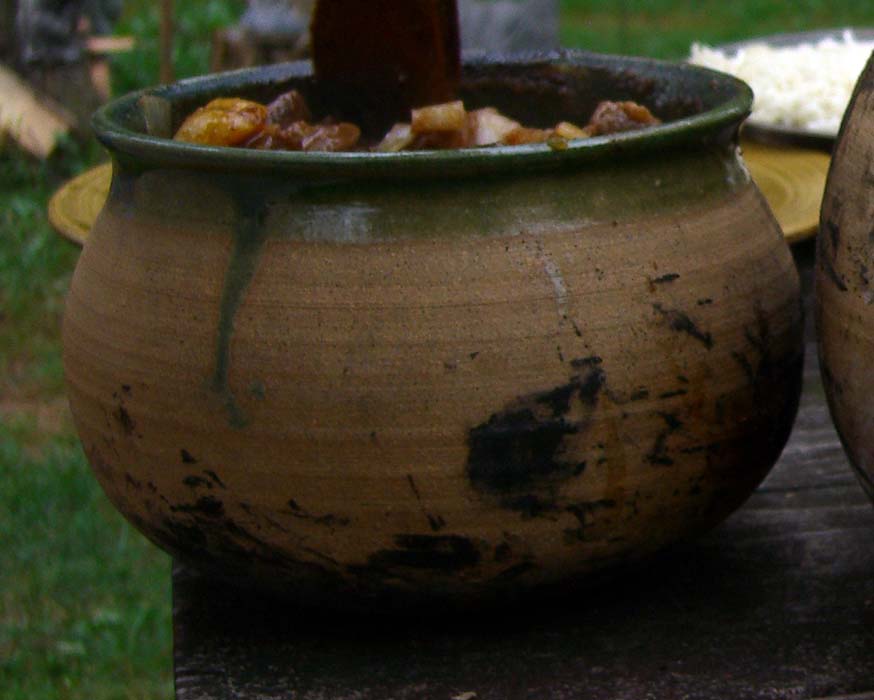 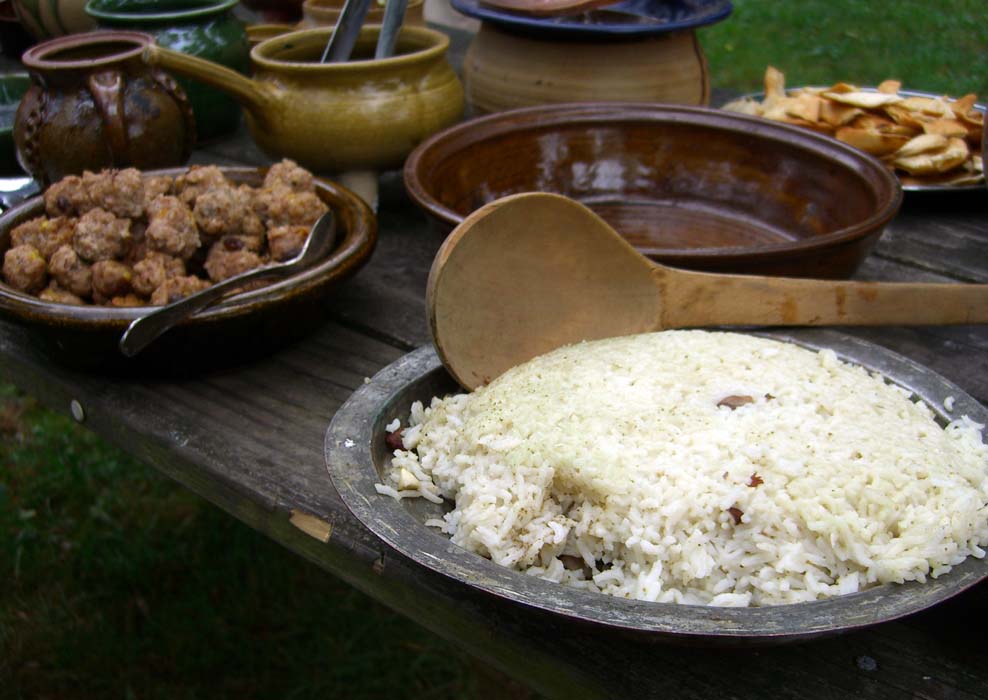 TheMaqluba cooked very quickly in the coals compared to the food being cooked in ceramic containers. Michael of Safita removed the Maqluba but kept it near the fire so it remained warm at serving. The rice was a little sticky but moist and the meat was done. The flavor was mild and would have been enhanced with more spices. Good news is that the meat was thoroughly cooked and the rice did not burn. No "metallic" taste could be detected. 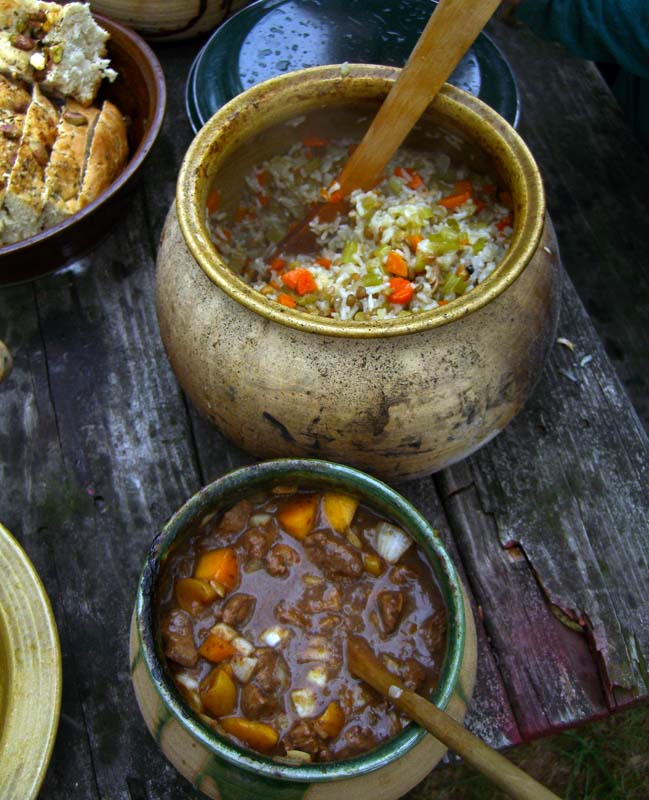 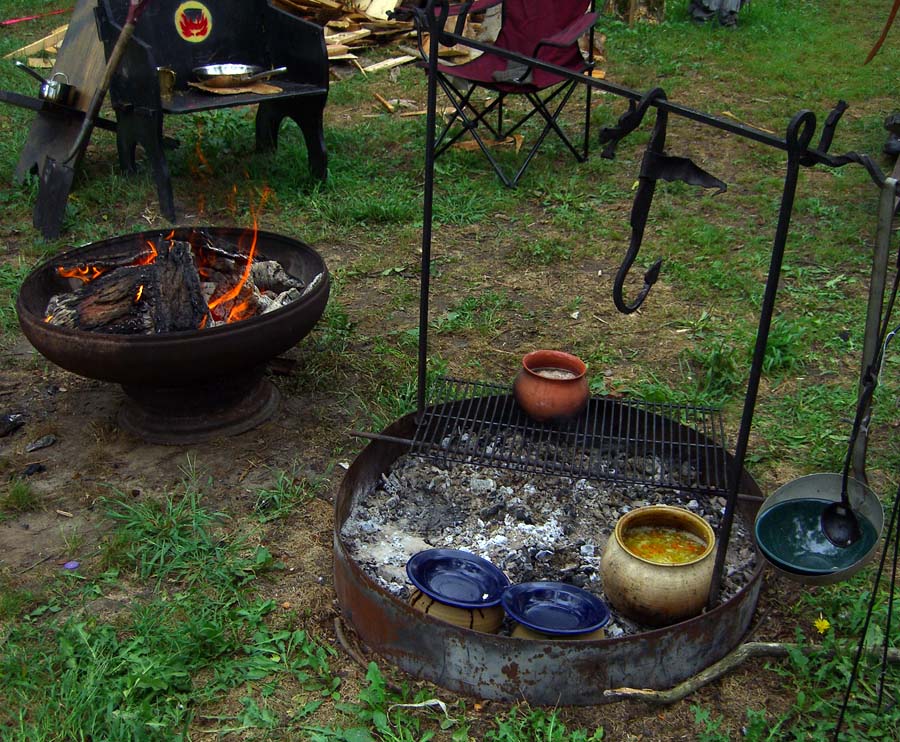 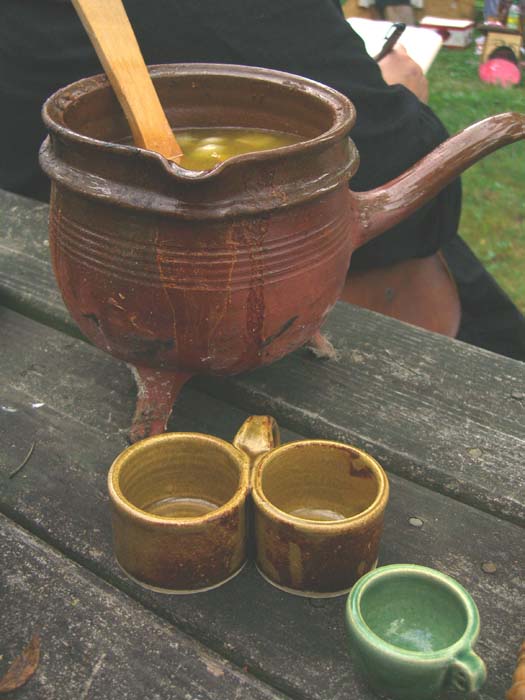 Images of Calontir at Pennsic 2005