I conducted two open fire cooking experiments at Pennsic. The first experiment was cooking Tavche Gravche (Macedonian, beans in a pot) while the second experiment was to cook Mjaddarah (Arabic, traditional lentil dish) over an open fire.

The recipe and directions for Tavche Gravche were provided by Christopher Sulincevski (a native Skopje and international project supervisor for St. Louis Community College). 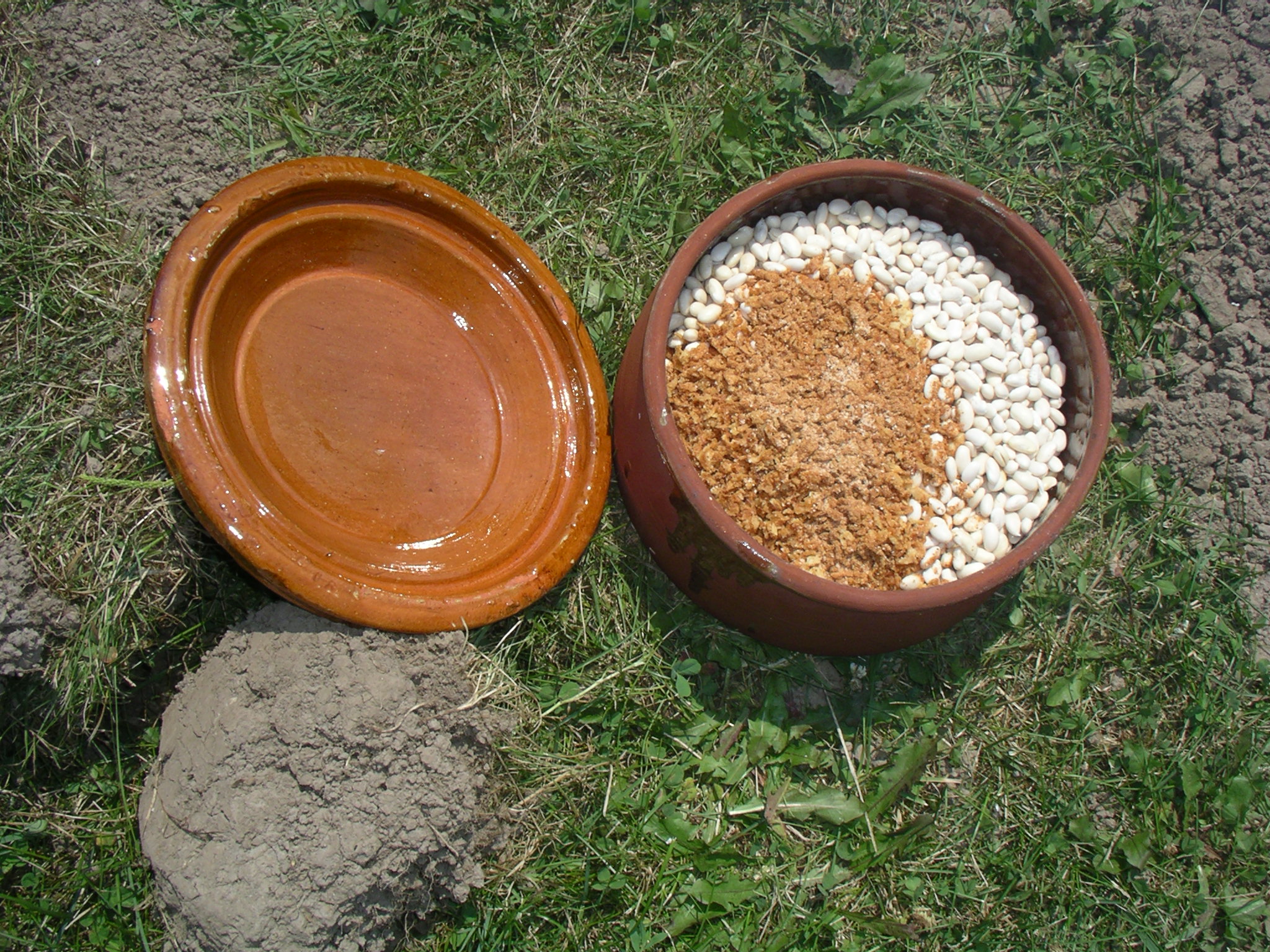 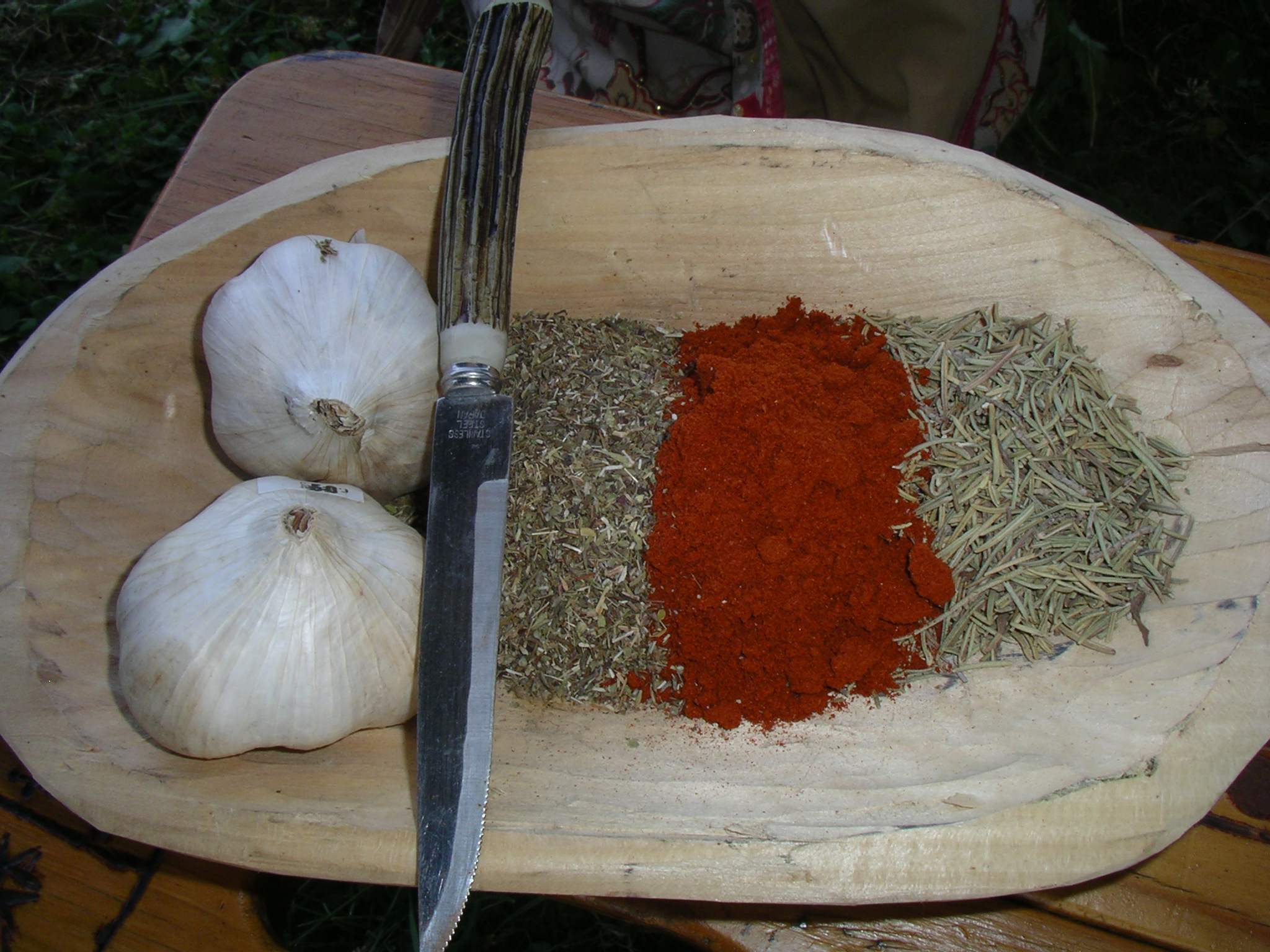 Dried thyme and dried rosemary were used to season the stew. The red spice is paprika. 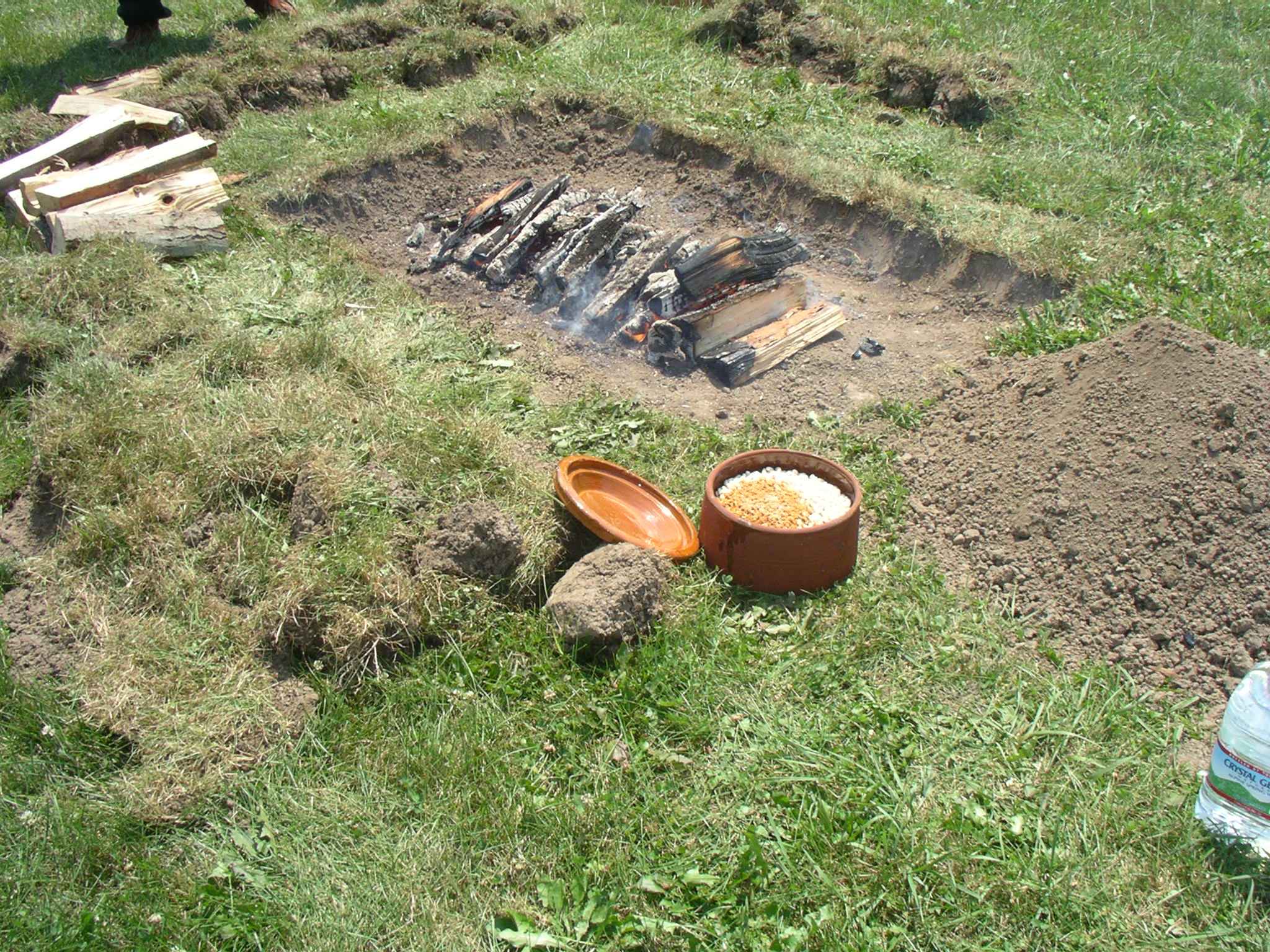 The cooking fire was made in a shallow earth pit. 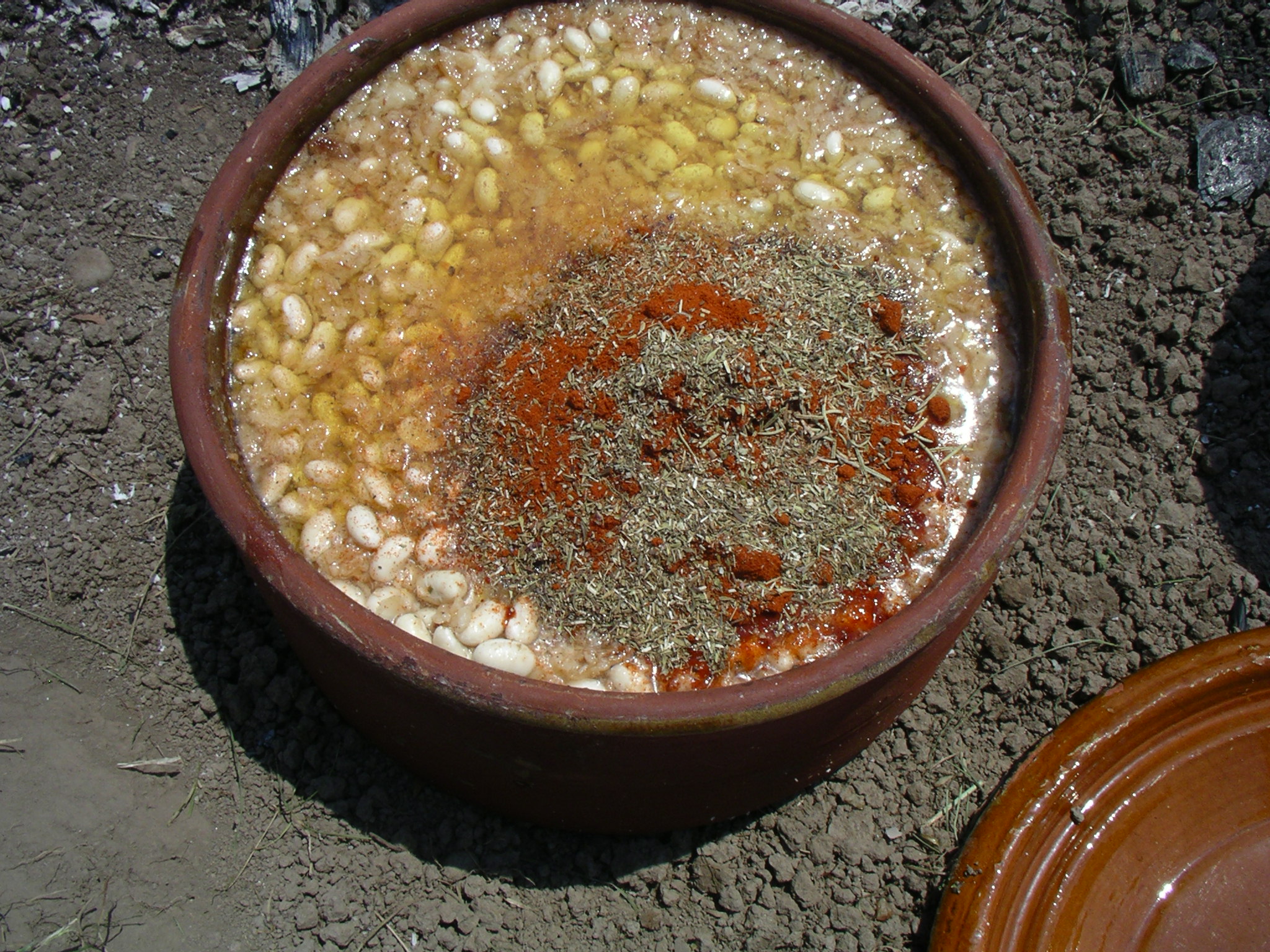 Beans, onions and spices waiting to be stirred. 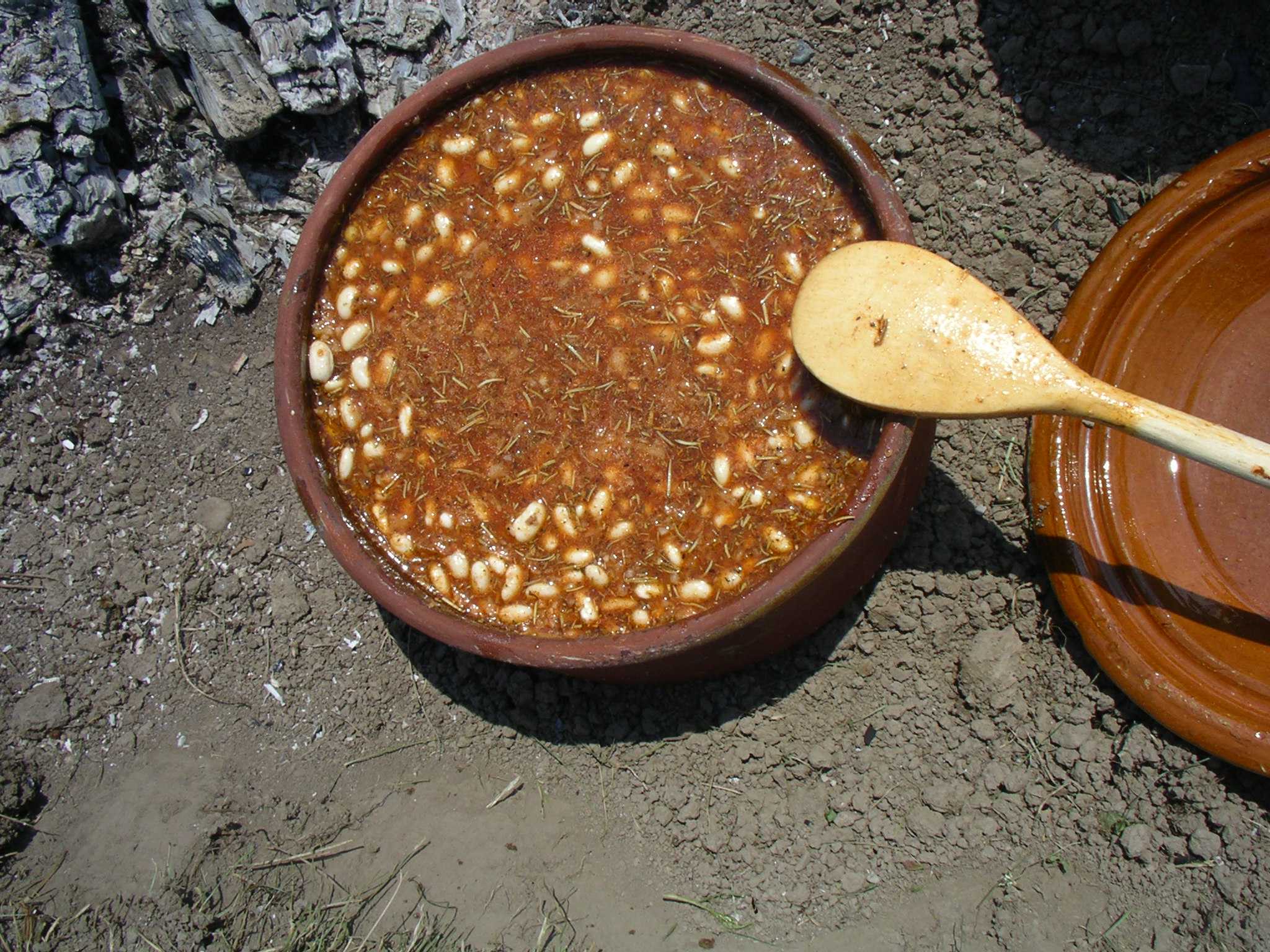 Tavche Gravche stirred and placed near the edges of the coals. 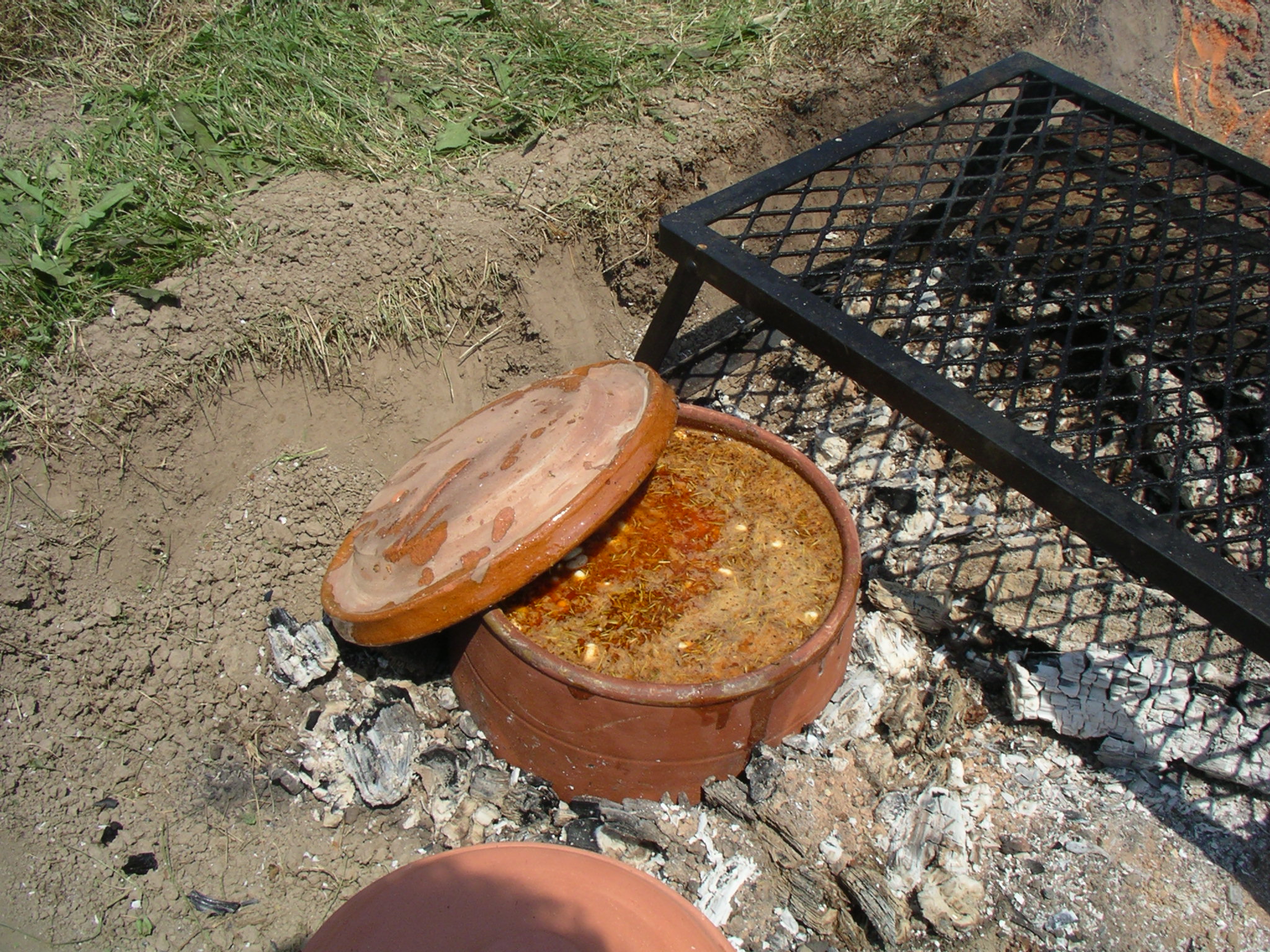 I used the base of a glazed Tajeen for a lid because the curbside pottery seller in Cairo did not have a lid large enough for the casserole. I had purchased the Tajeen in Morocco. The covered casserole came to a low boil and cooked for 5 hours. The beans were still not fully cooked because the heat level of the fire had not be maintained during the day. Undercooked beans can cause food poisoning, so I cooked the dish for another 2 hours over a more intense heat. The Tavche Gravche was delicious. It was actually easier to cook in the casserole than in the "cooking pot" that I used during Pennsic 2006. The glazed casserole was far easier to clean than the unglazed cooking pot used in 2006. 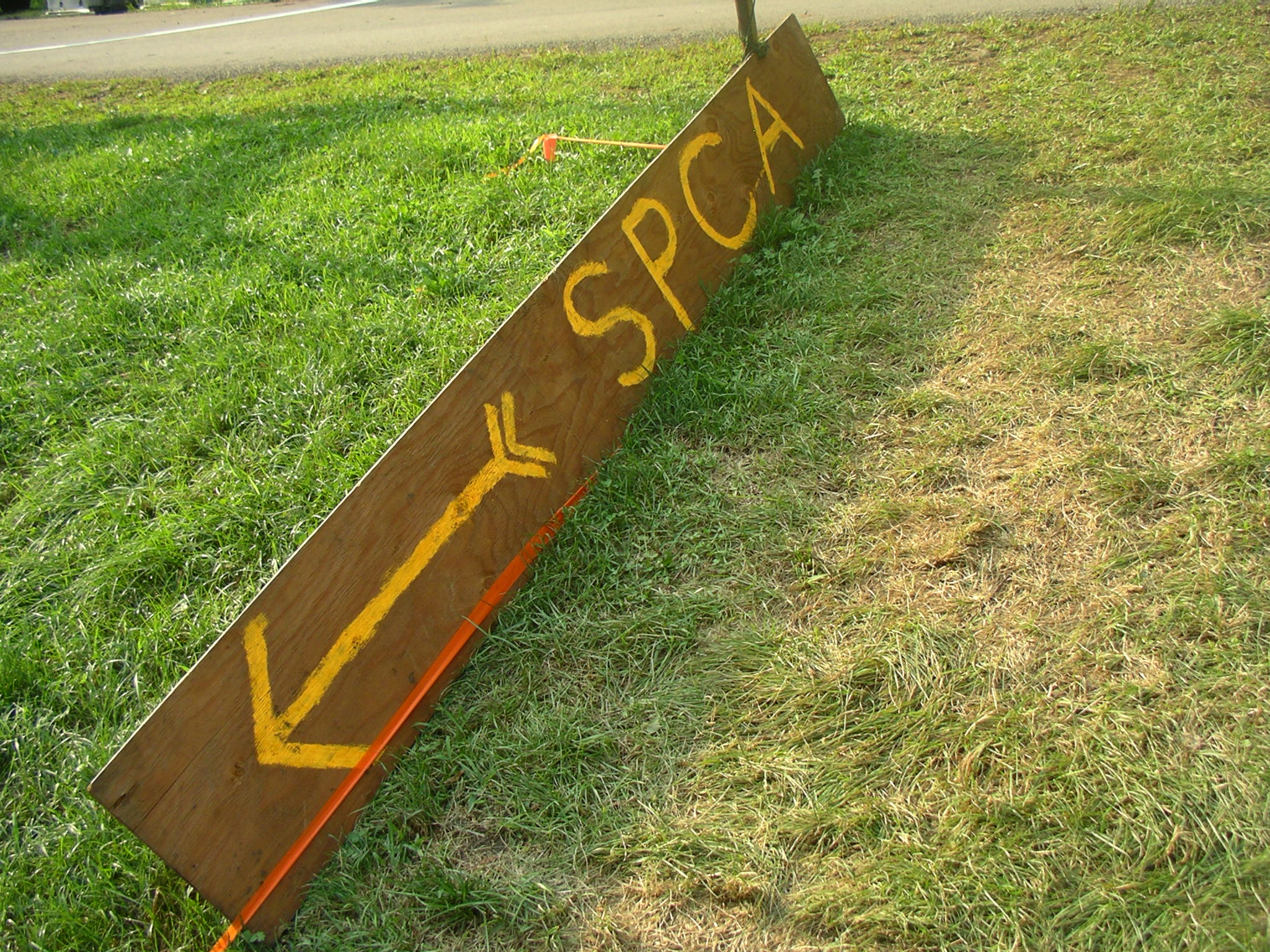 The second cooking experiments was with the SPCA (Stewpot Period Culinary Association). 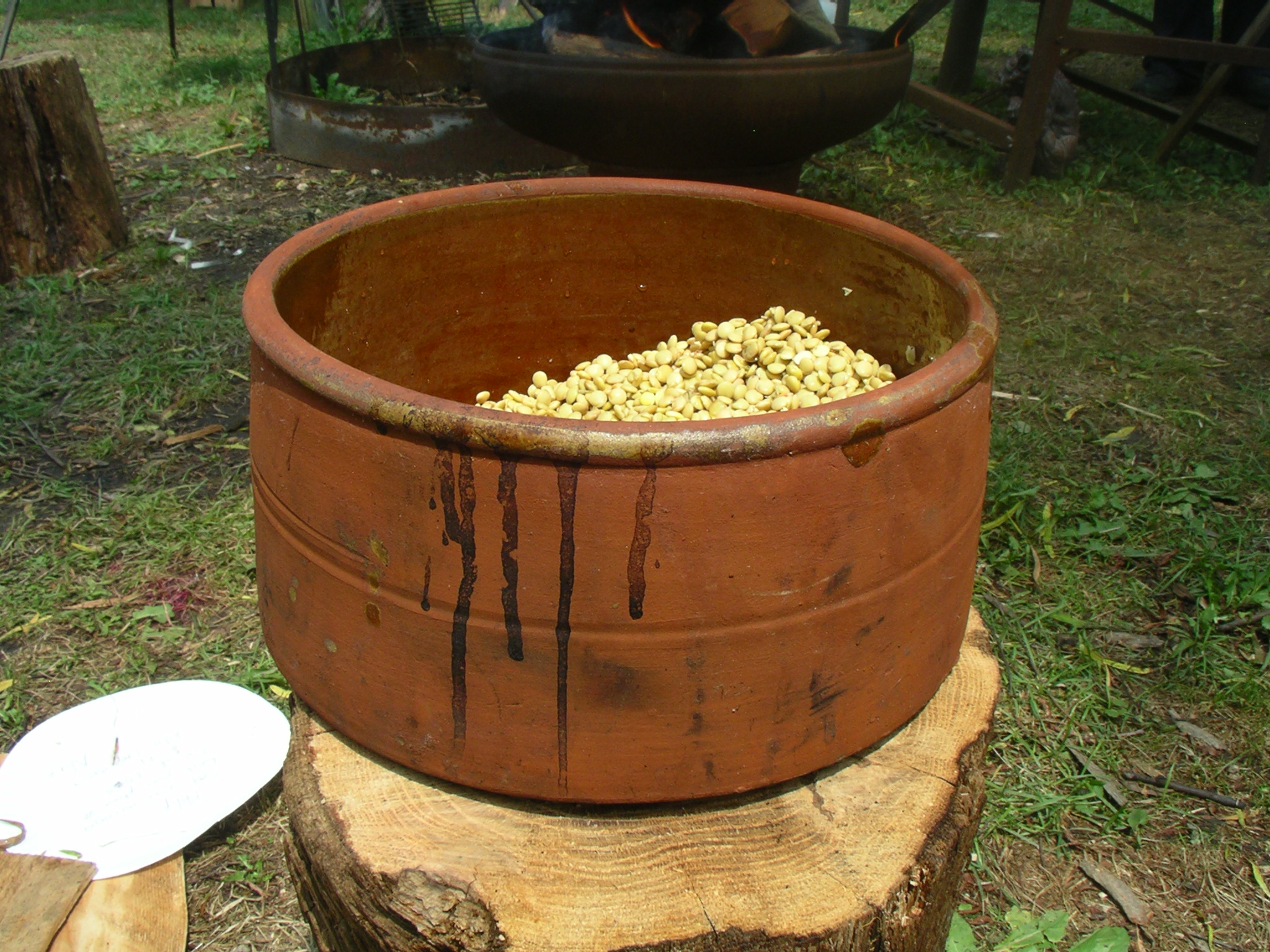 Lentils were soaked for 6 hours, drained, then placed to cook in the Egyptian casserole with water and salt. 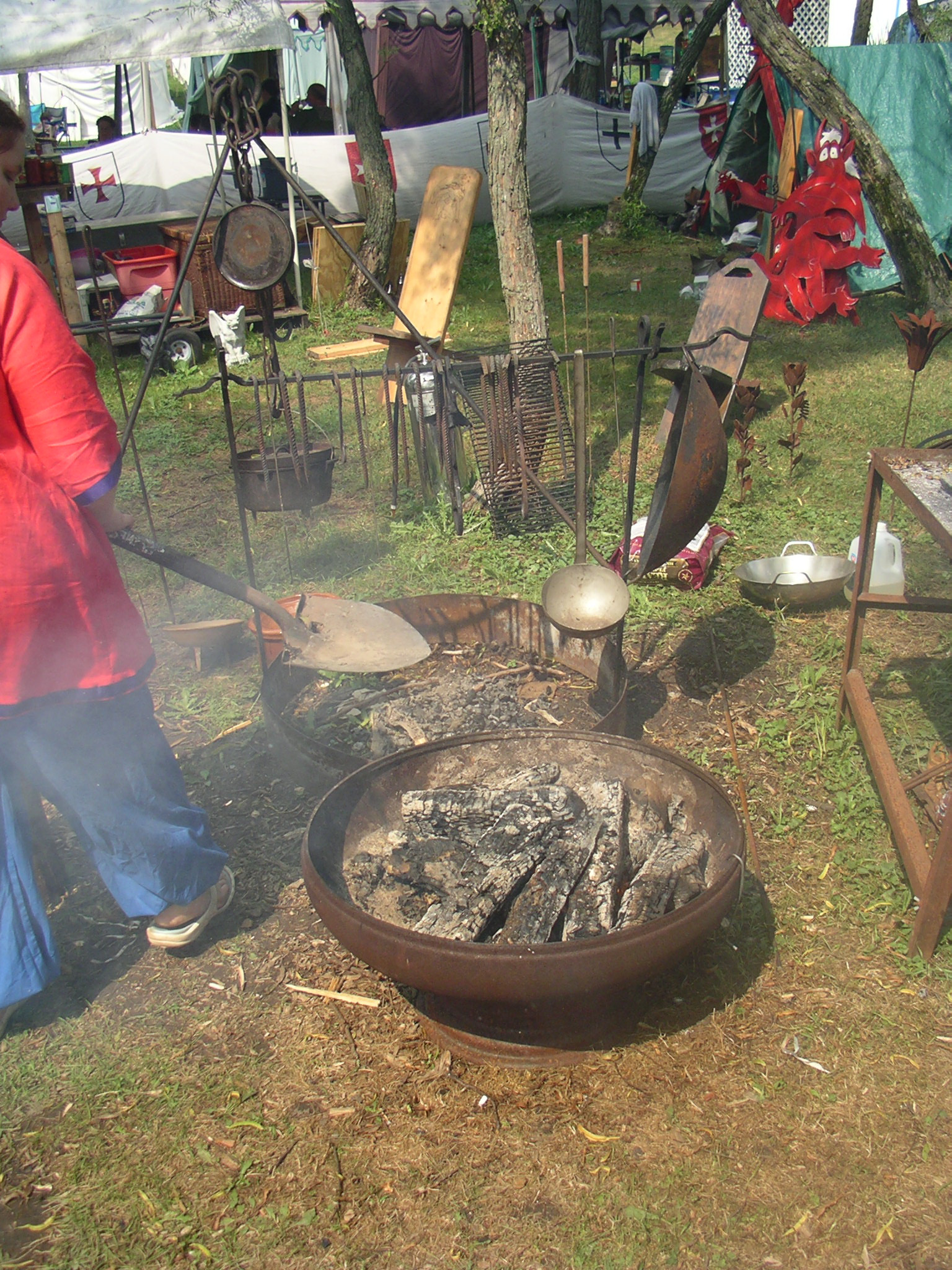 The second day of cooking experiments used a separate firepit to create coals for cooking. 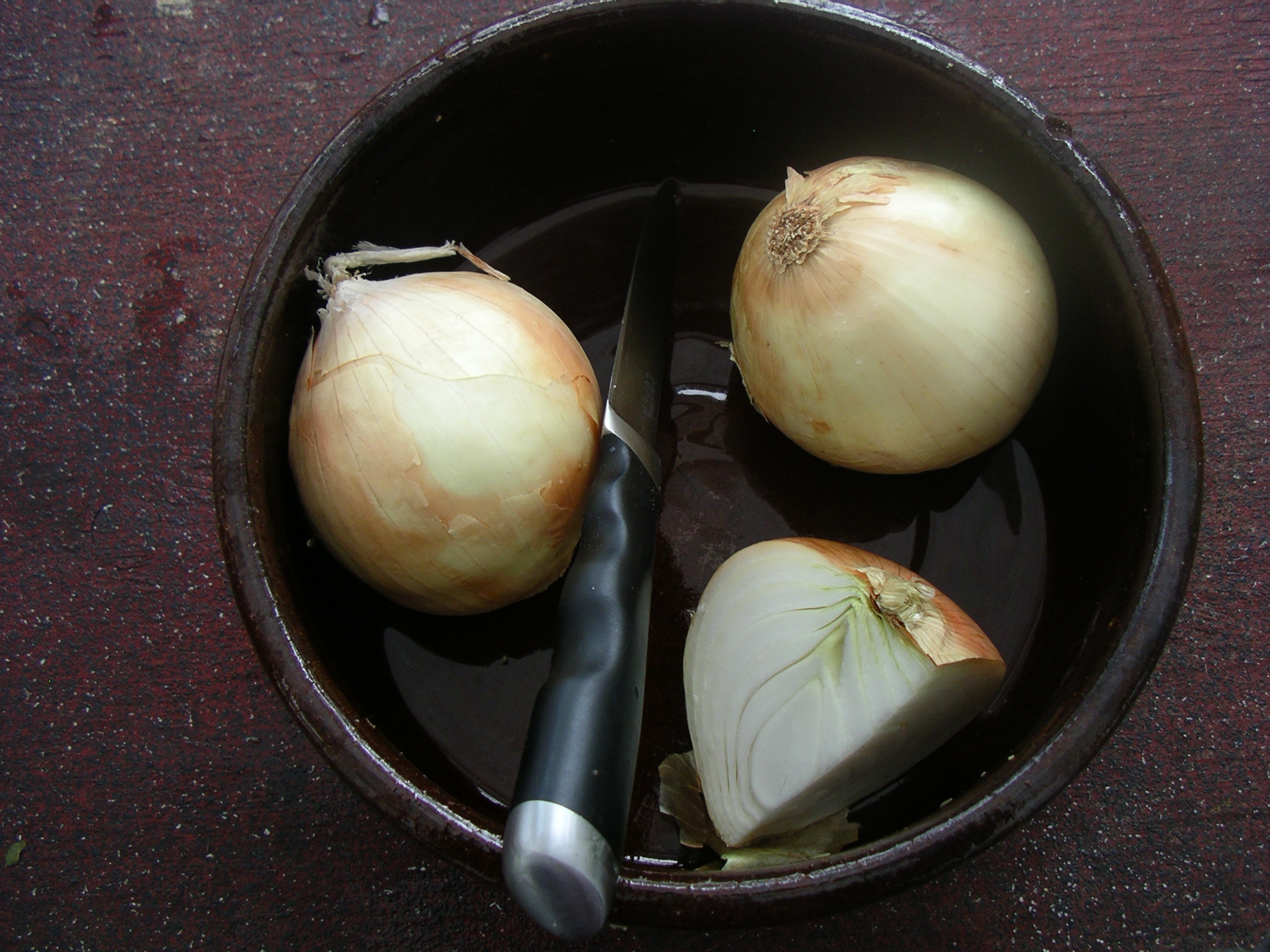 I used fresh onions for the Mjaddarah. 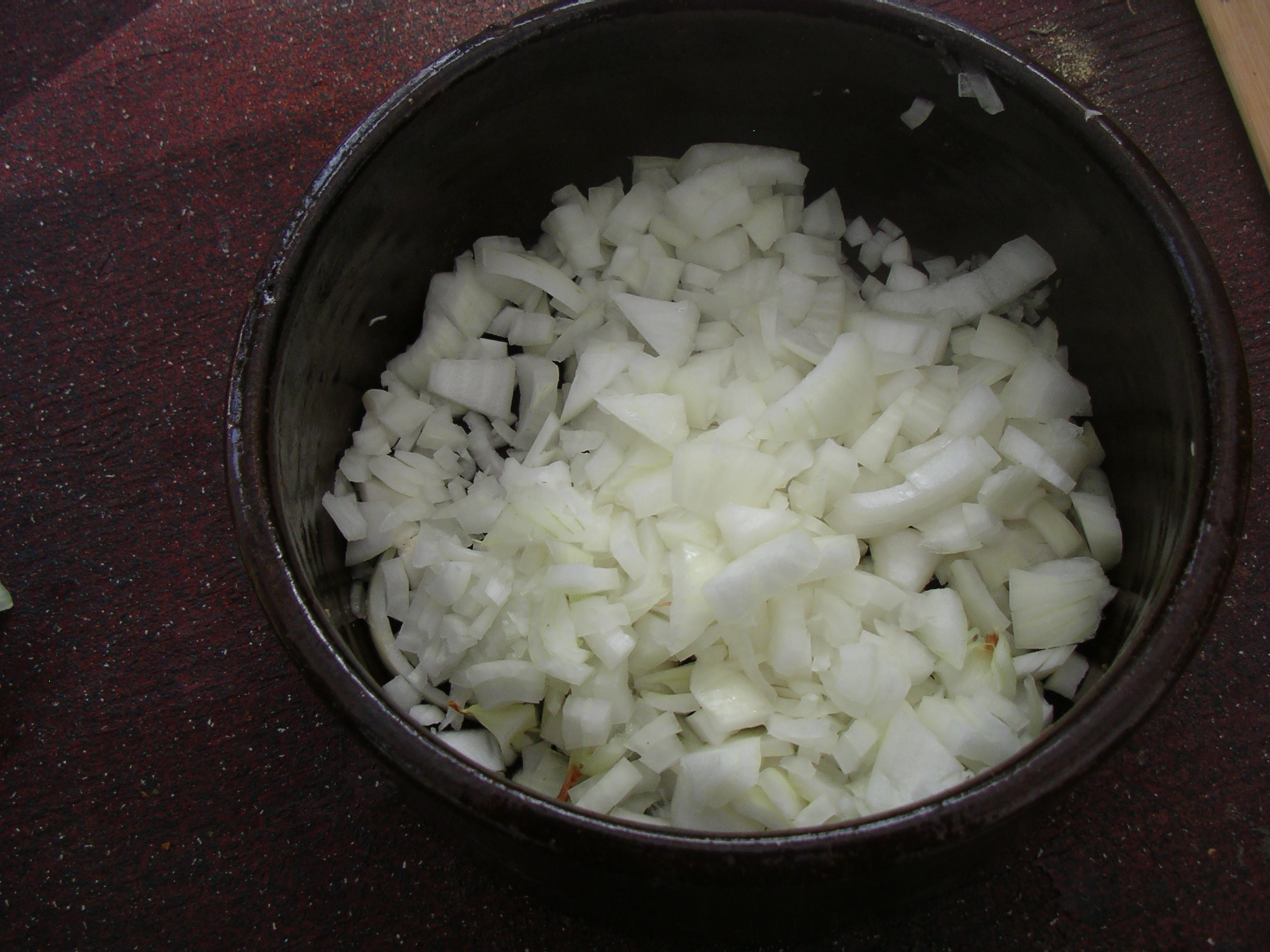 One and a half onions were chopped by hand for the dish and kept in a smaller Egyptian casserole. 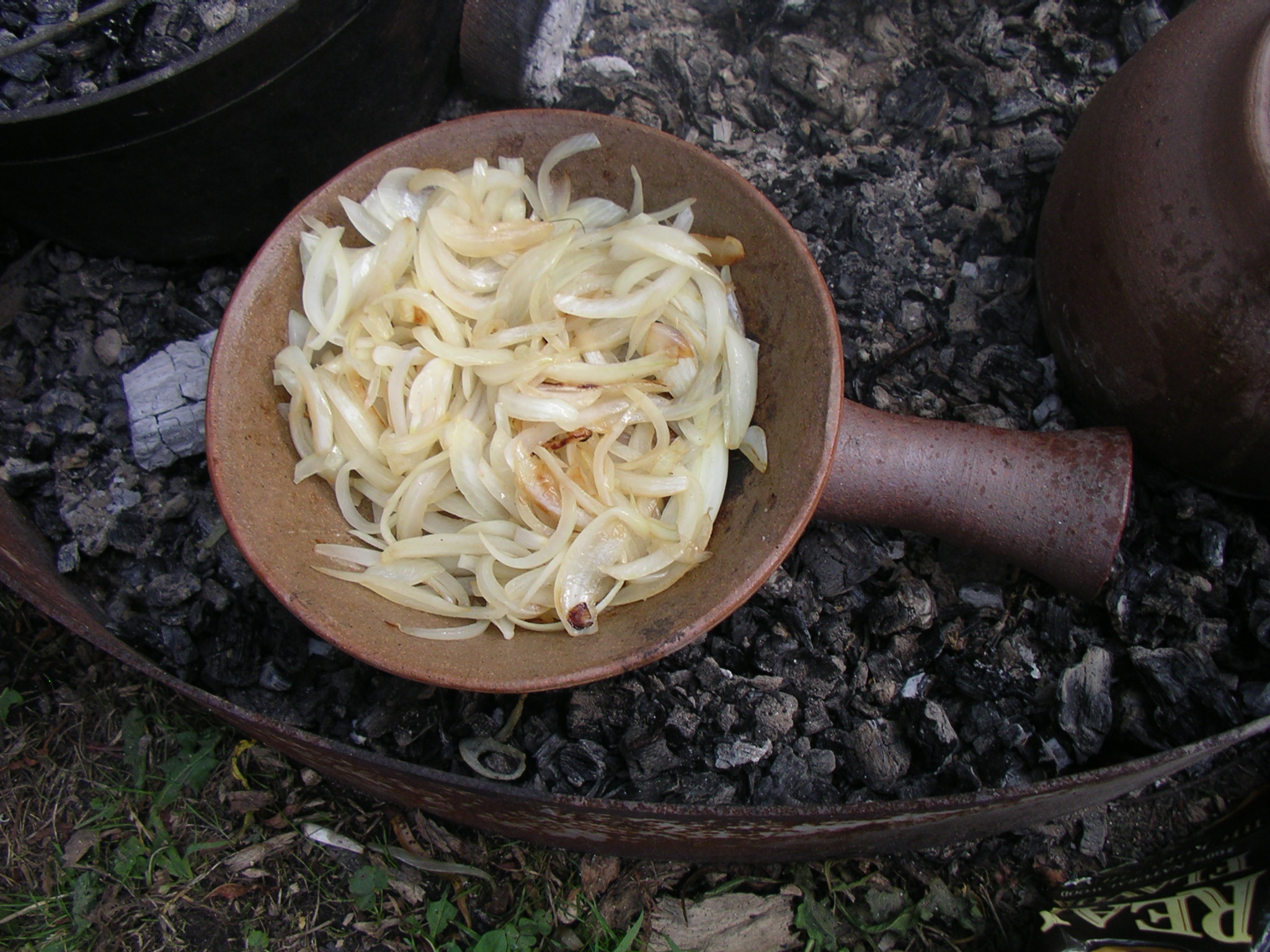 The chopped onion was fried in a flat bottom frying pan made by Lynn McAdams (SCA Elaine Ladd from the Middle Kingdom). It took approximately 30 minutes to fry the onion in two batches. The frying pan was already hot becaused Lynn McAdams had fried onions in it for her bean dish. Olive oil was used in the frying.

The lentils and onions cooked in the covered casserole for 4 hours, then were removed from the coals to cool. The last step in the preparation was to add one cup of commercially produced sour cream, and stir. Normally, I would have preferred plain yoghurt, but it was not available. The sour cream was a perfect match for the lintels and fried onions. Several individuals at the resulting feast indicated that they would not have been able to eat the yoghurt (for medical reasons), but that the sour cream created no problems. The Mjaddarah was excellent and two individuals asked for the recipe. 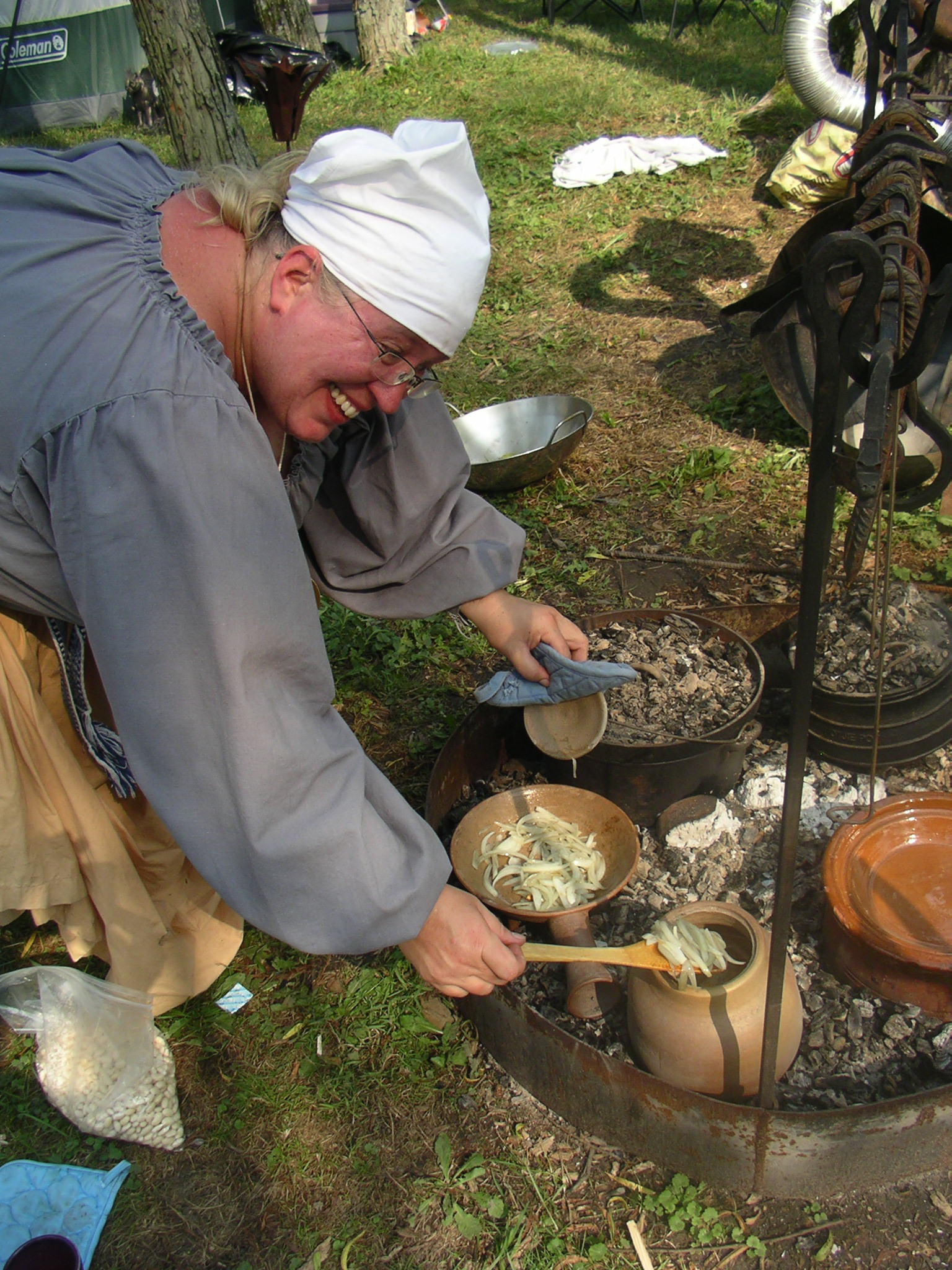 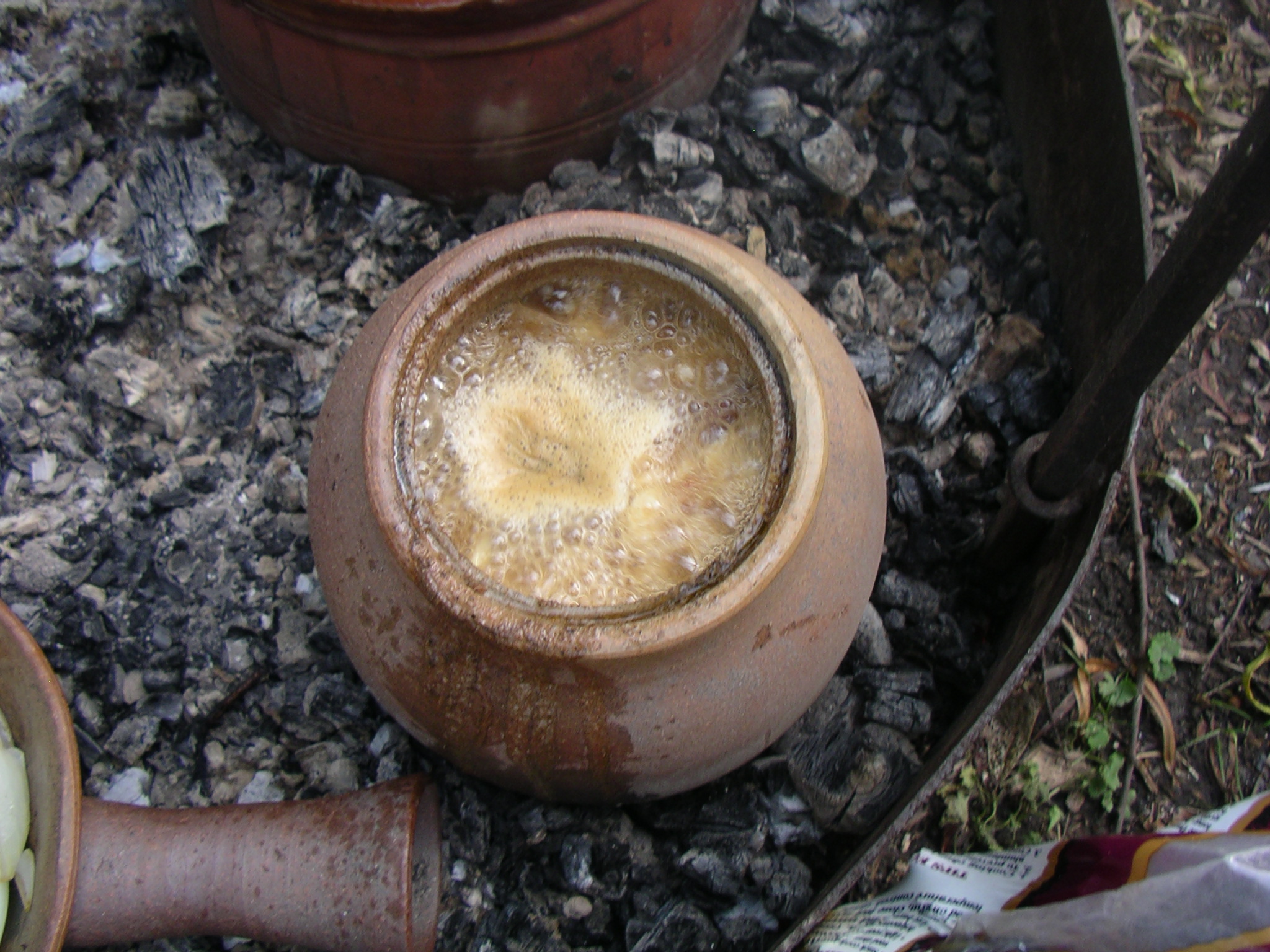 Lynn McAdams was very pleased to get a rolling boil in her cooking pot containing the beans, sausage and onions. 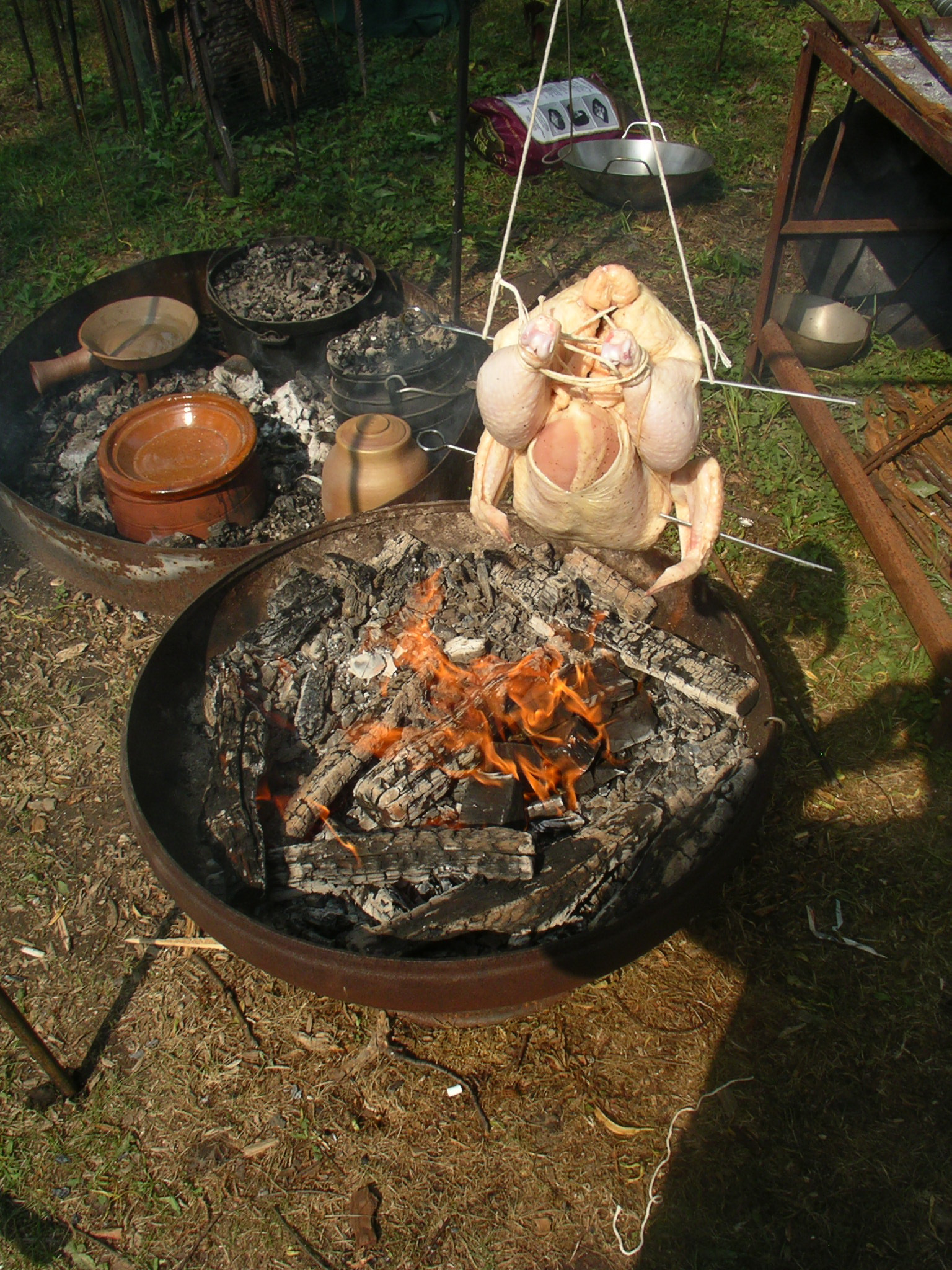 Another set of cookfire experiments included roasting a chick and a beef roast using string. 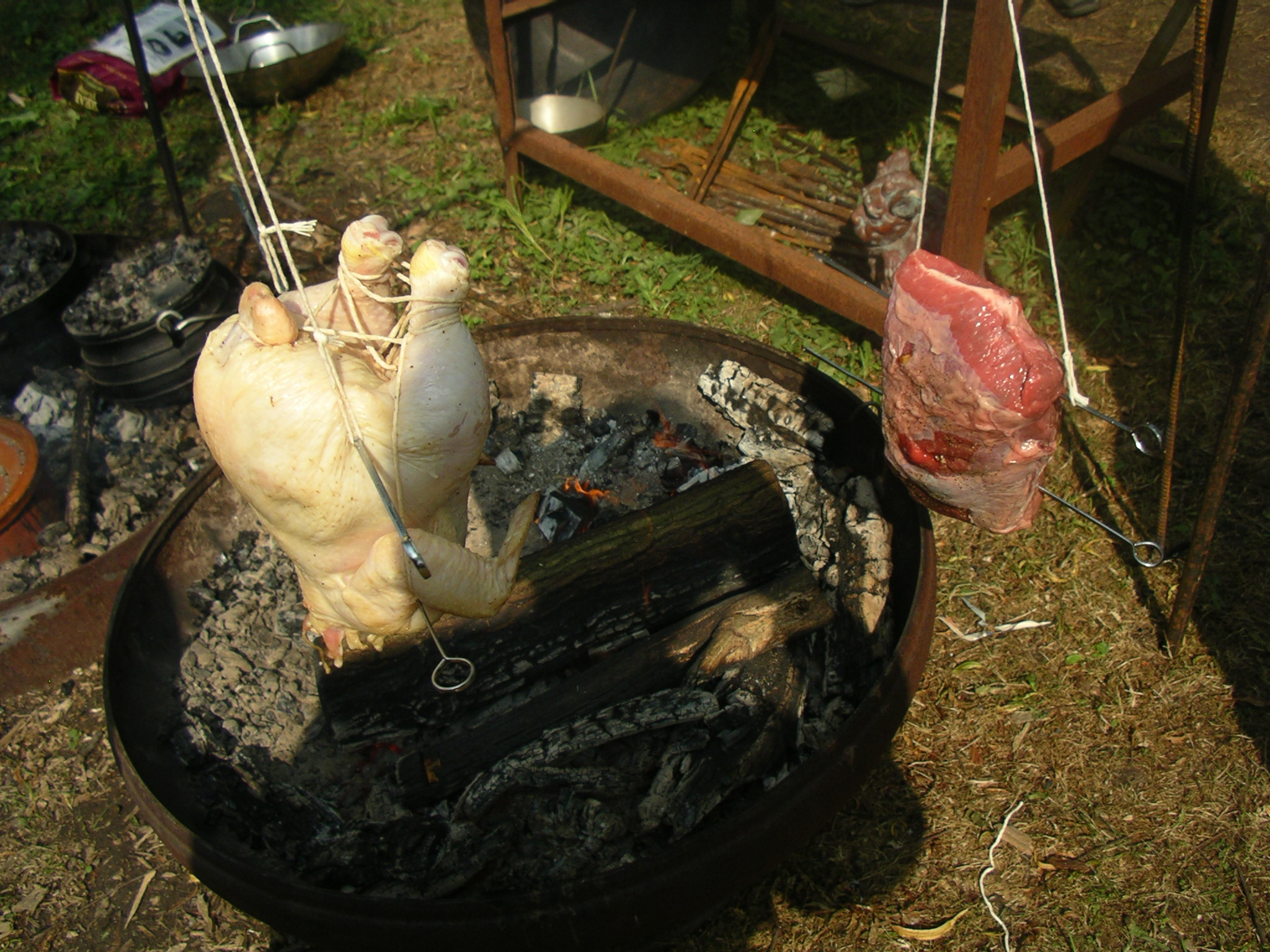 One problem with string roasting method is that the string can fail if the heat from the fire is too intense. 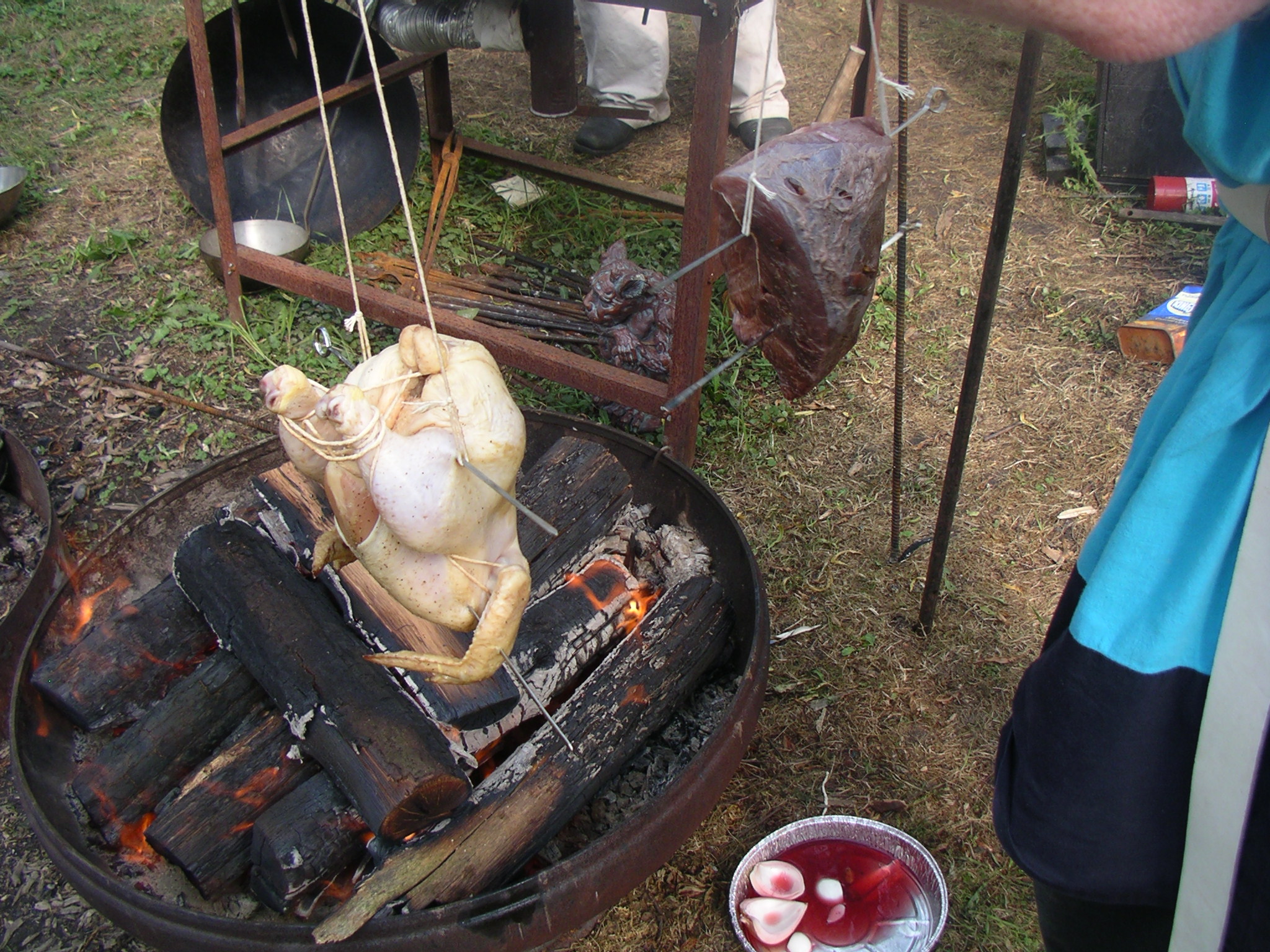 The heat from the burning wood eventually proved too hot for string roasting. The string roasting experiment was moved to the area above the cooking pots in the bed of coals. That heat level was perfect. 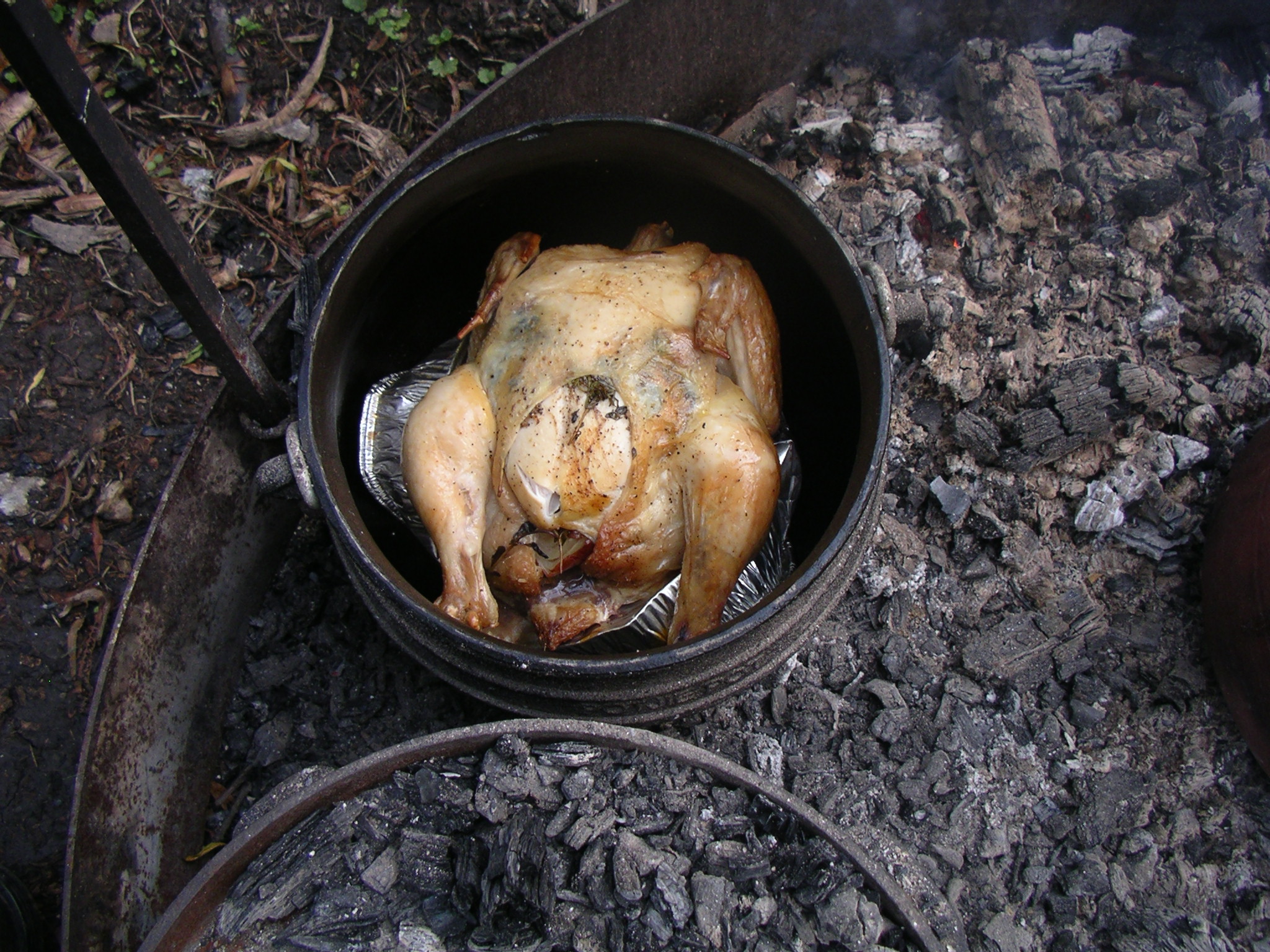 A chicken was also prepared in a dutch oven made from cast iron. 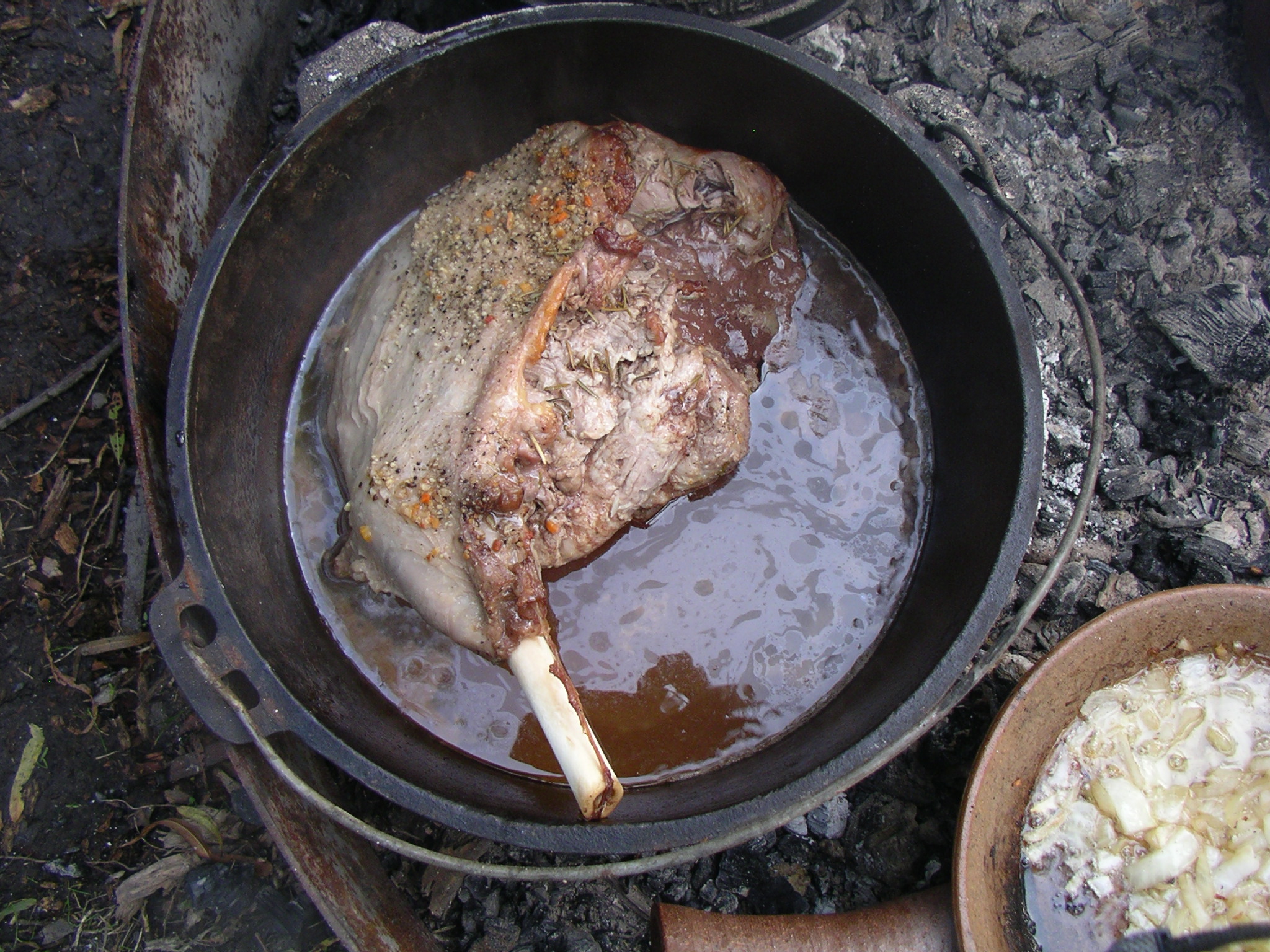 Seasoned leg of lamb prepared in a dutch oven made from cast iron. 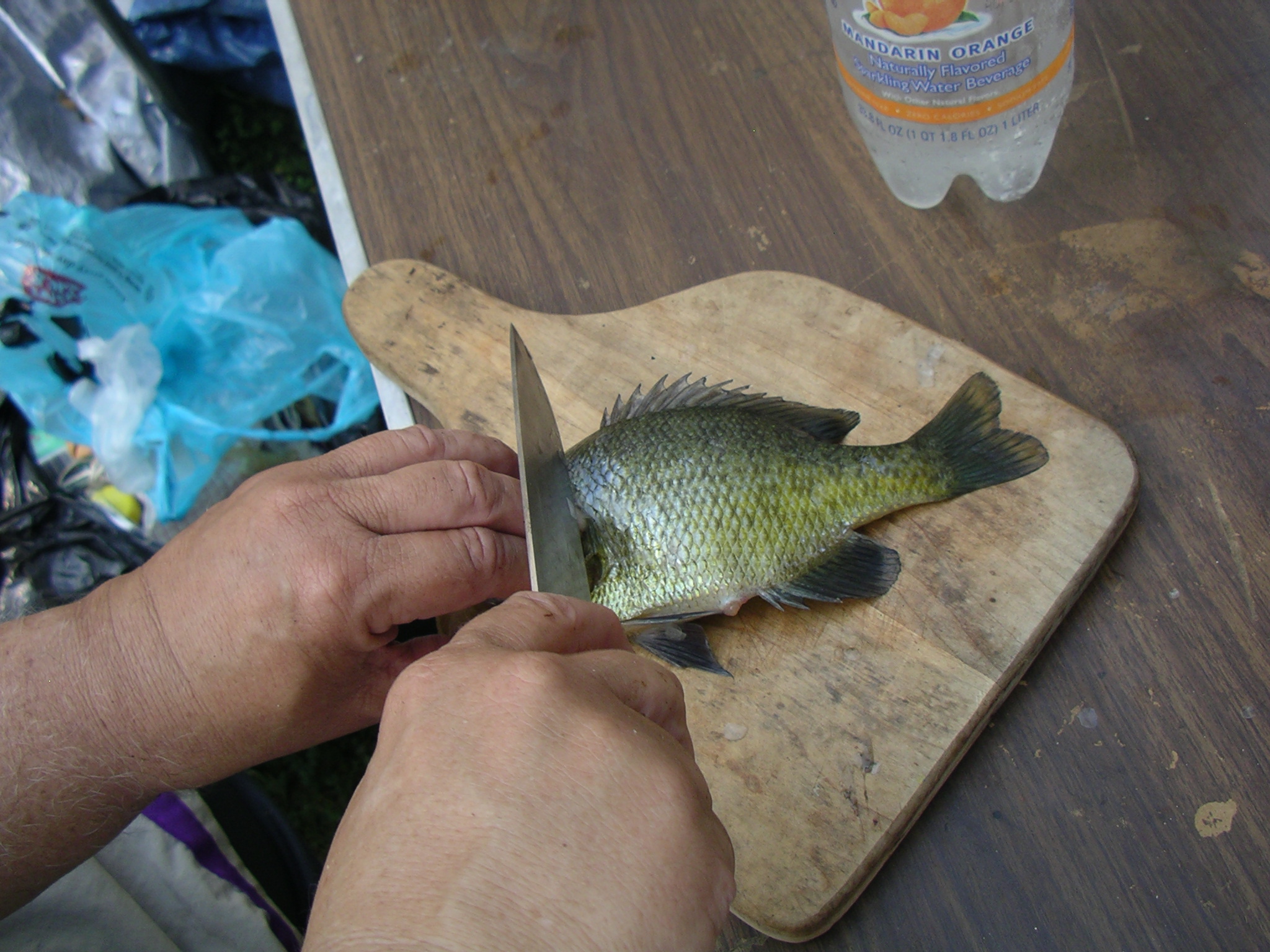 The SPCA cooking experiment also included a dozen bluegil fish that were caught from Cooper Lake and immediately cleaned. 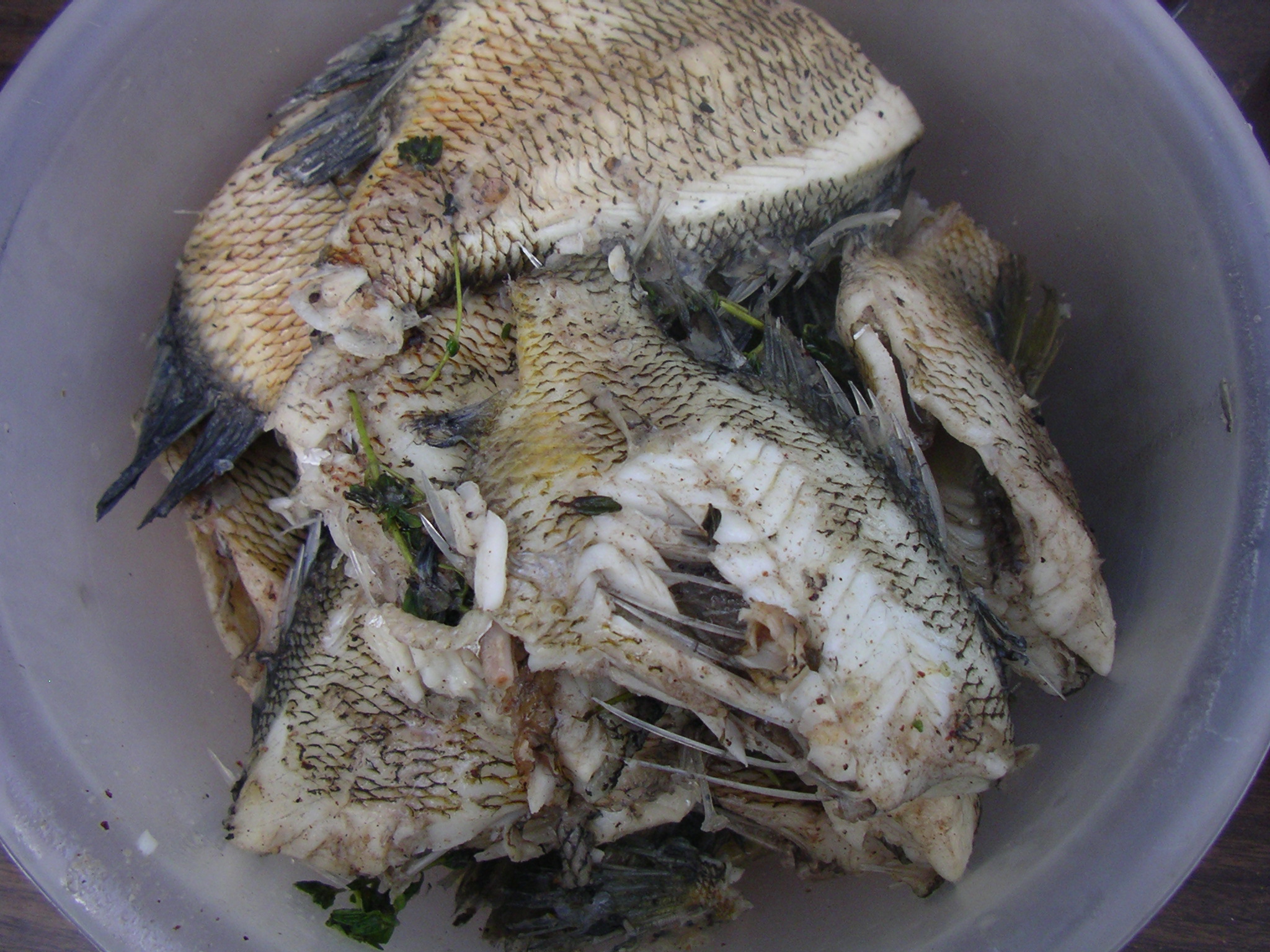 The fish were cooked in olive oil in a metal wok over the fire by Lord Stefan li Rous (Mark Harris). They had been salted and seasoned with Aunti Awren's Rusian Spice mix. 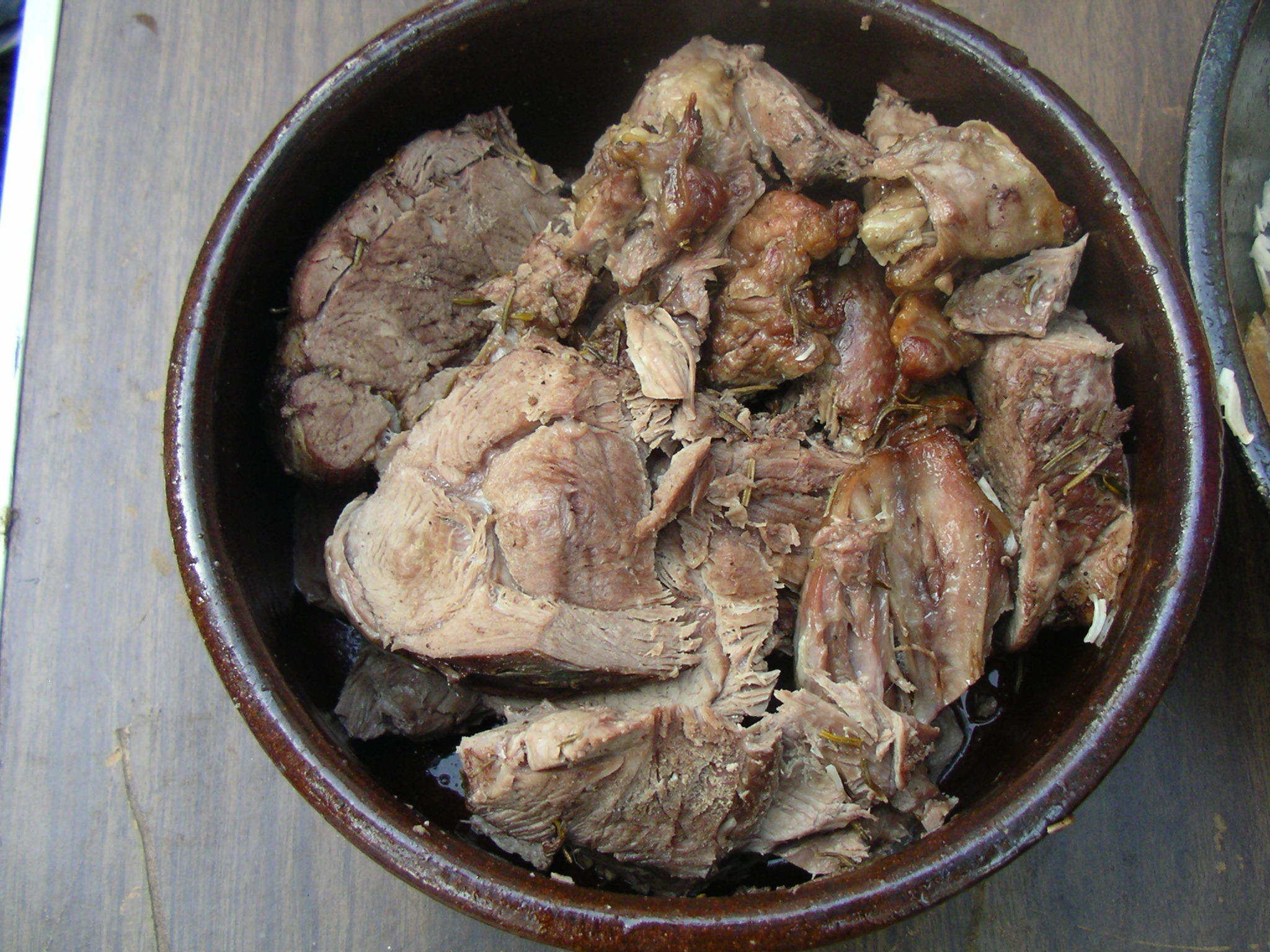 Lamb cut up and served in the smaller Egyptian casserole. 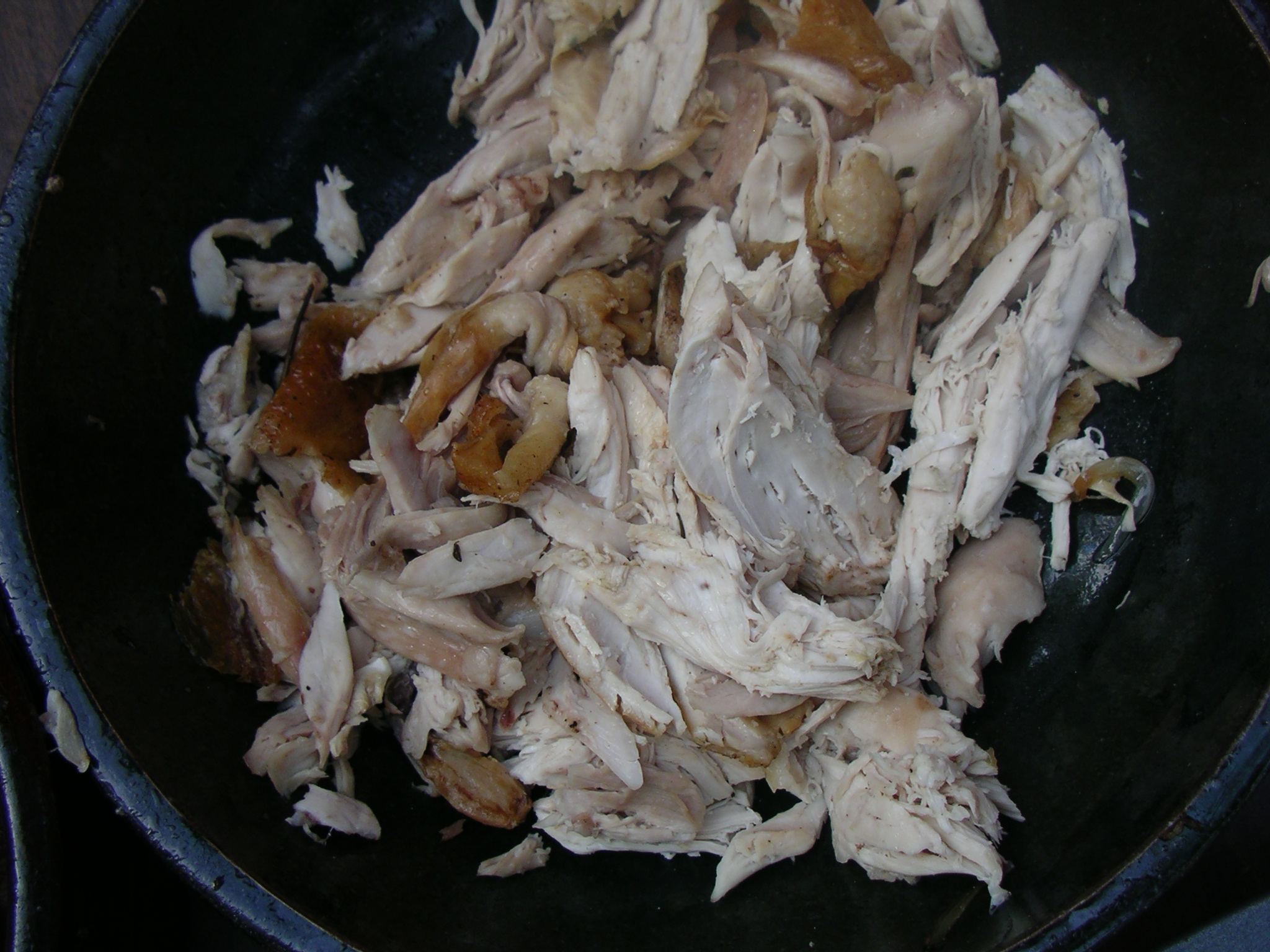 Deboned chicken that was cooked in the dutch oven. 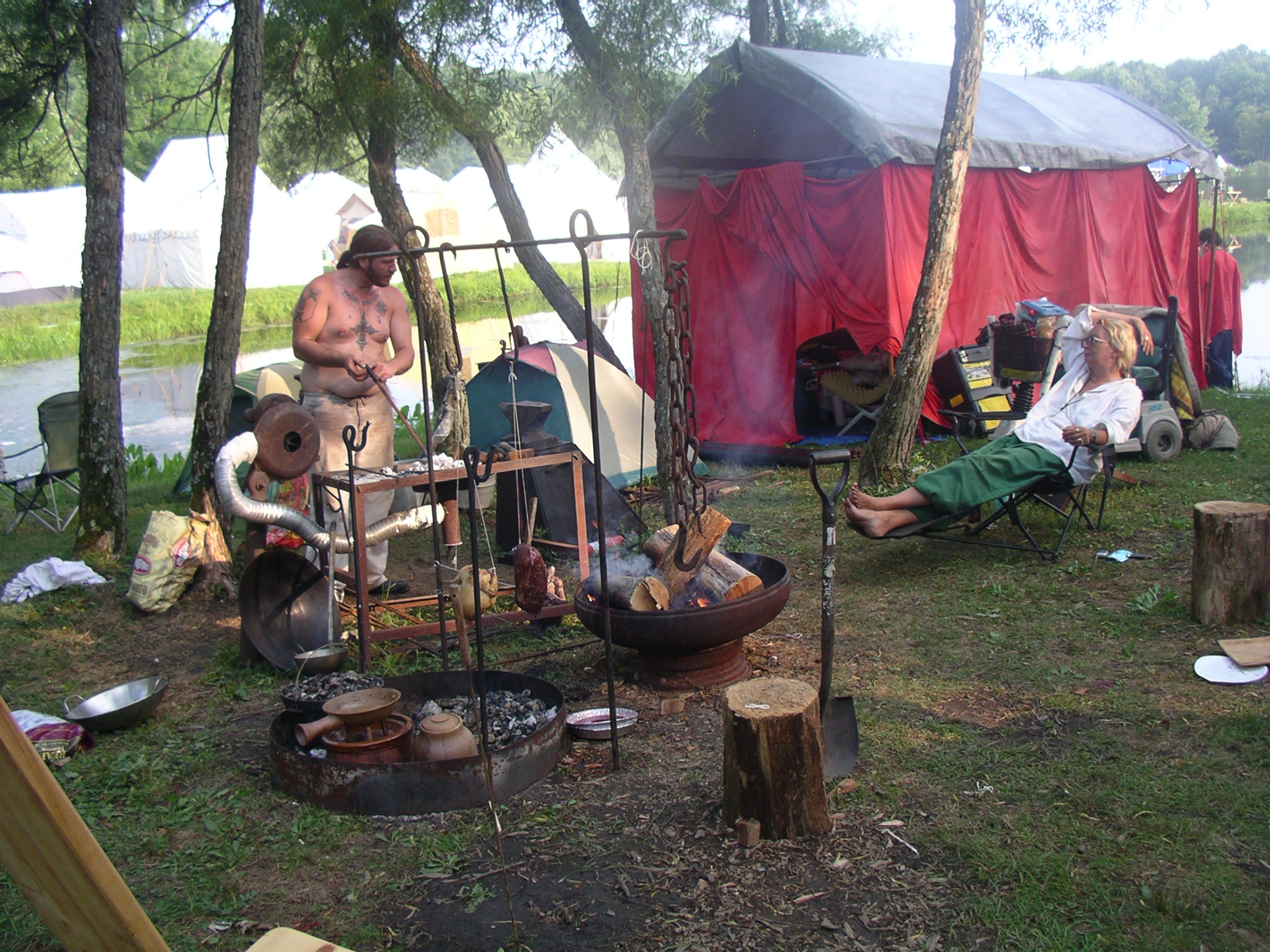 The SPCA cooking experiment was conducted in Flip's camp while a blacksmith student was creating a fire poker under the supervision of Flip. Webpage created 13 August 2007 `