Abstract
An archaeological test pit measuring 90 centimters by 30 centimeters was excavated in the Quinette Cemetery. The purpose of the test pit was to determine if unmarked graves would be impacted by the installation of a new memorial stone. The Quinette Cemeter is one of five African-American Slave burial grounds in Missouri. No evidence of unmarked graves were detected during the testing.

Methodology
The test pit was excavated by hand on 2 September 2007. The fieldwork was under the direction of Dr. Michael Fuller (Professor of Anthropology at St. Louis Community College - Meramec and member of the Missouri Association of Professional Archaeologists). Field assistants included Mr. Chip Clatto (MA in liberal arts and St. Louis expert in AfricanAmerican archaeology), Mr. Mark Leach (board member of the Missouri Archaeological Society and local preservation expert at Blake Mound), and Mr. Keith Rawlings (member of the Kirkwood Historical Society and local preservation expert on the Quinette Cemetery).

The soil was excavated using masonry trowels and sifted through a quarter inch ( 6 mm) mesh sieve. The sifted soil was kept in a large plastic trash bin until it was needed for backfilling the test pit. Black plastic was used to line the bottom and walls of the test pit before the soil was returned to the pit. The test was excavated to a depth of 30 centimeters. Digital photographs were taken during the excavation and a videotape summary was made at the end of the excavation.

The soil color changed to a light gray (10YR7/1) at a depth of 17 centimeters below the surface. The consistency of the soil changed from a silty loam into a fairly compact, clay subsoil. Two small soil discoloration extended from top soil into the subsoil. Each discoloration measured approximately 5 x 12 centimeters. The two discolorations extended only a few centimeters in the light gray clay and were probably rodent features. There was no evidence of a grave outline penetrating into the light gray clay. No artifacts or bones were discovered in the gray clay. Roots were rare in the gray clay. A single cobble (12 x 10 x 2 centimeters) of unworked limestone was encountered at a depth of 21 centimeters below the surface. The limestone cobble did not show evidence of shaping or burning.

Conclusion
No evidence of prehistoric or historic features were encountered in the single test pit excavated at the Quinette Cemetery. 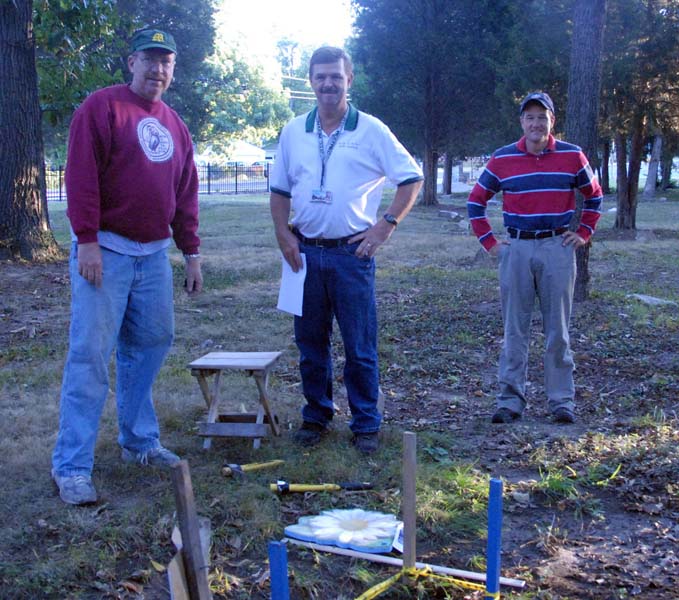 Professor Fuller (left), Keith Rawings, Mark Leach and a member of the Quinette Cemetery Preservation group at the beginning of the excavation. Photograph by Chip Clatto. 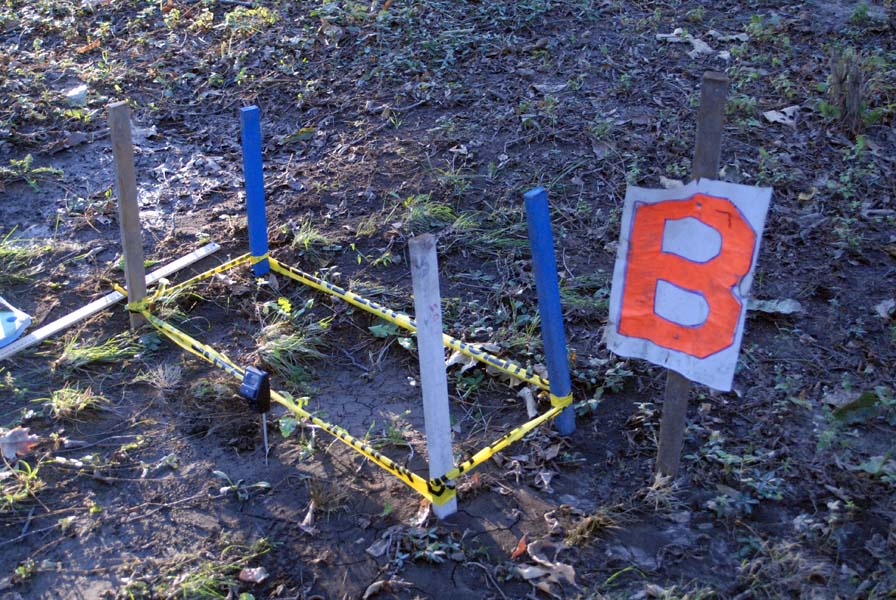 The test pit before excavation. Three locations were proposed to the Kirkwood Parks Department and they selected location "B" for testing. 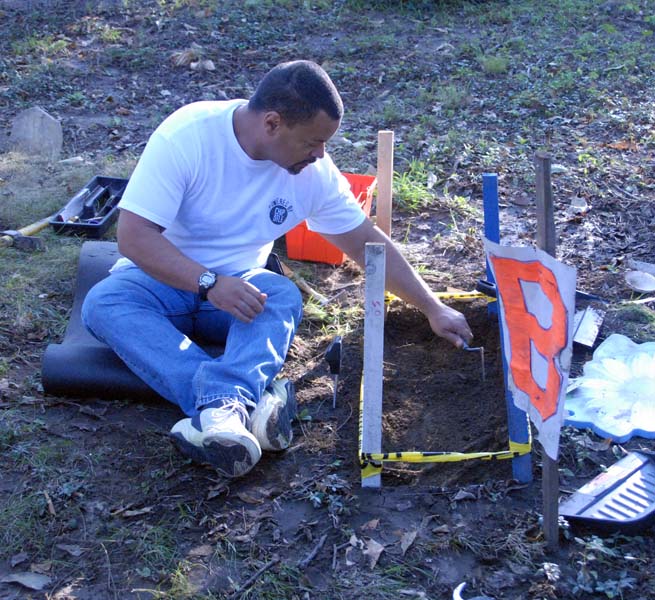 Chip Clatto uses a trowel to remove the top 10 centimeters of soil in the test pit. 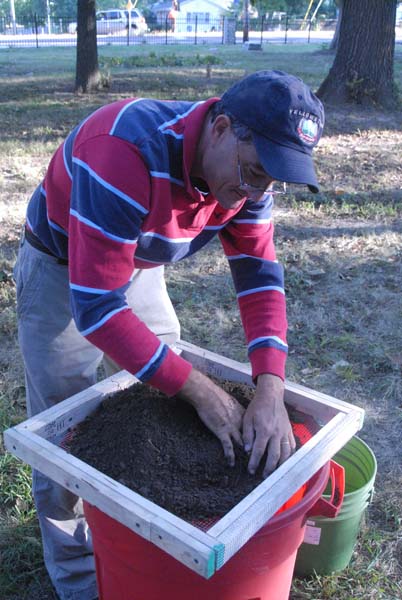 Mark Leach sifted all of the soil excavated from the test pit. 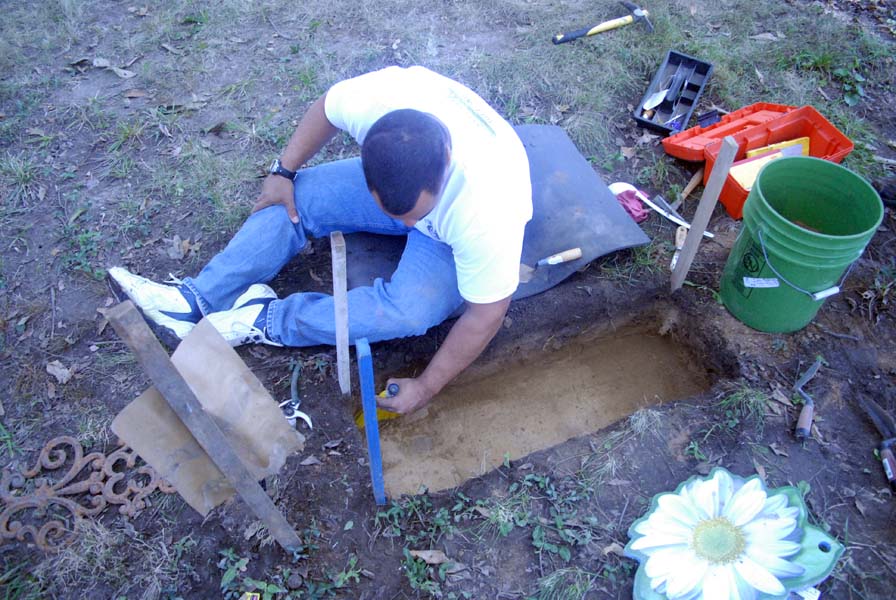 Light colored subsoil was encountered across the test pit at a depth of 17 centimeters. 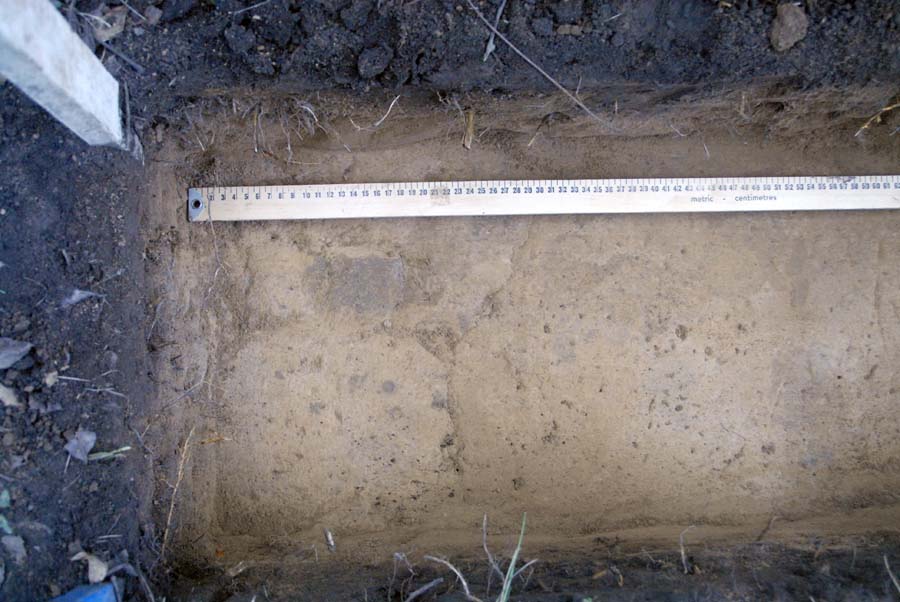 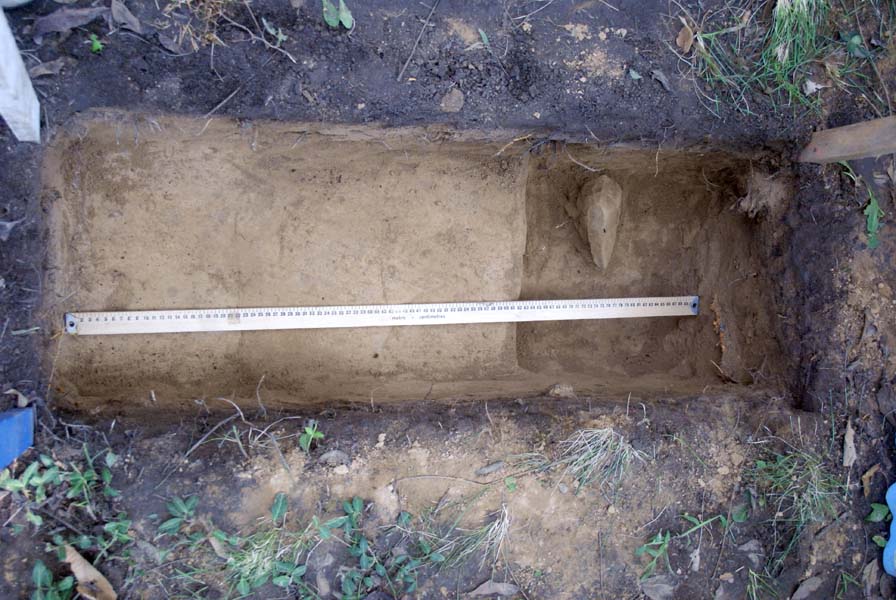 Limestone cobble discovered at a depth of 27 centimeters below the surface. It shows no sign of alteration or human use.