A pictograph site in Ralls County was documented by Eugene Diesing (member of the Missouri Archaeological Society) in 1938. The site was recorded with the Archaeological Survey of Missouri by Frank Magre. This site is very isolated and located on private land; it is not open to the public. 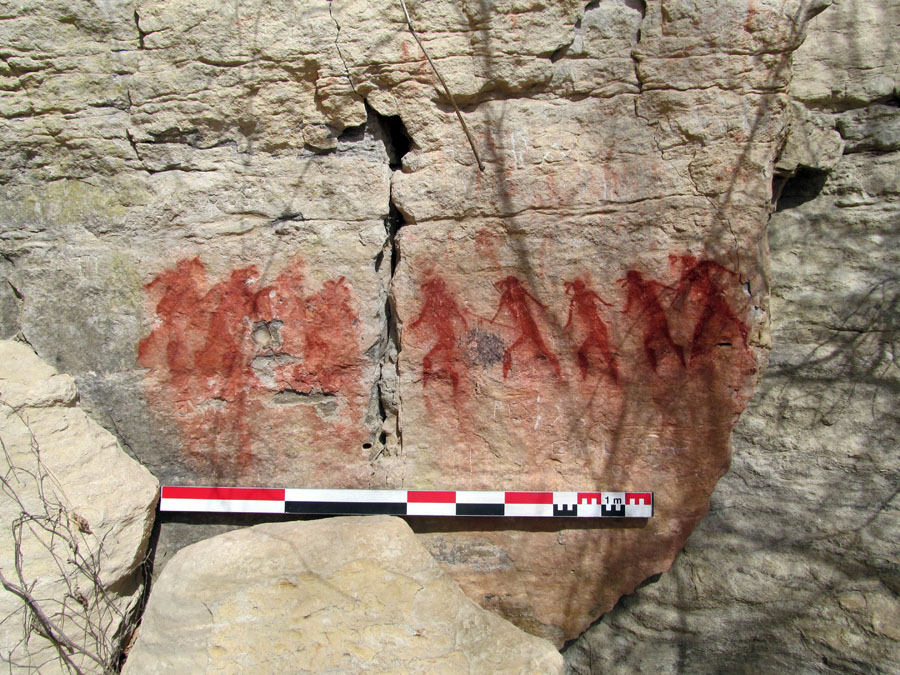 This panel is described as "running men" by Wellmann (1979:Figure 801) and Diaz-Granados and Duncan (2000:Figure 5.42). Two bullet holes can be identified among the pictographs to the left of the crack. 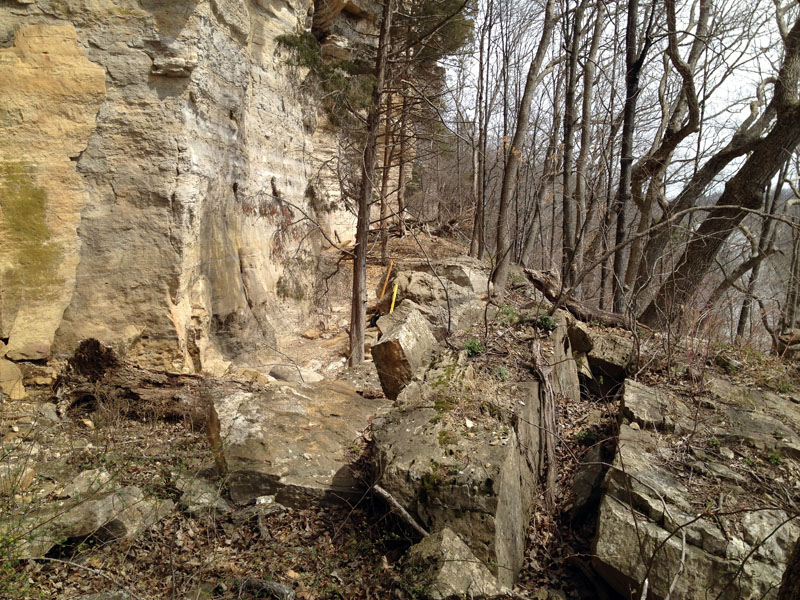 Ron Leake (President of the Ralls County Historical Society) and the property owner accompanied me to the Salt River pictograph site during April of 2014. The site consists of six major panels that stretch across 44 meters (144 feet) of the bluff. The site is approximately 40 meters (131 feet) above the Salt River. 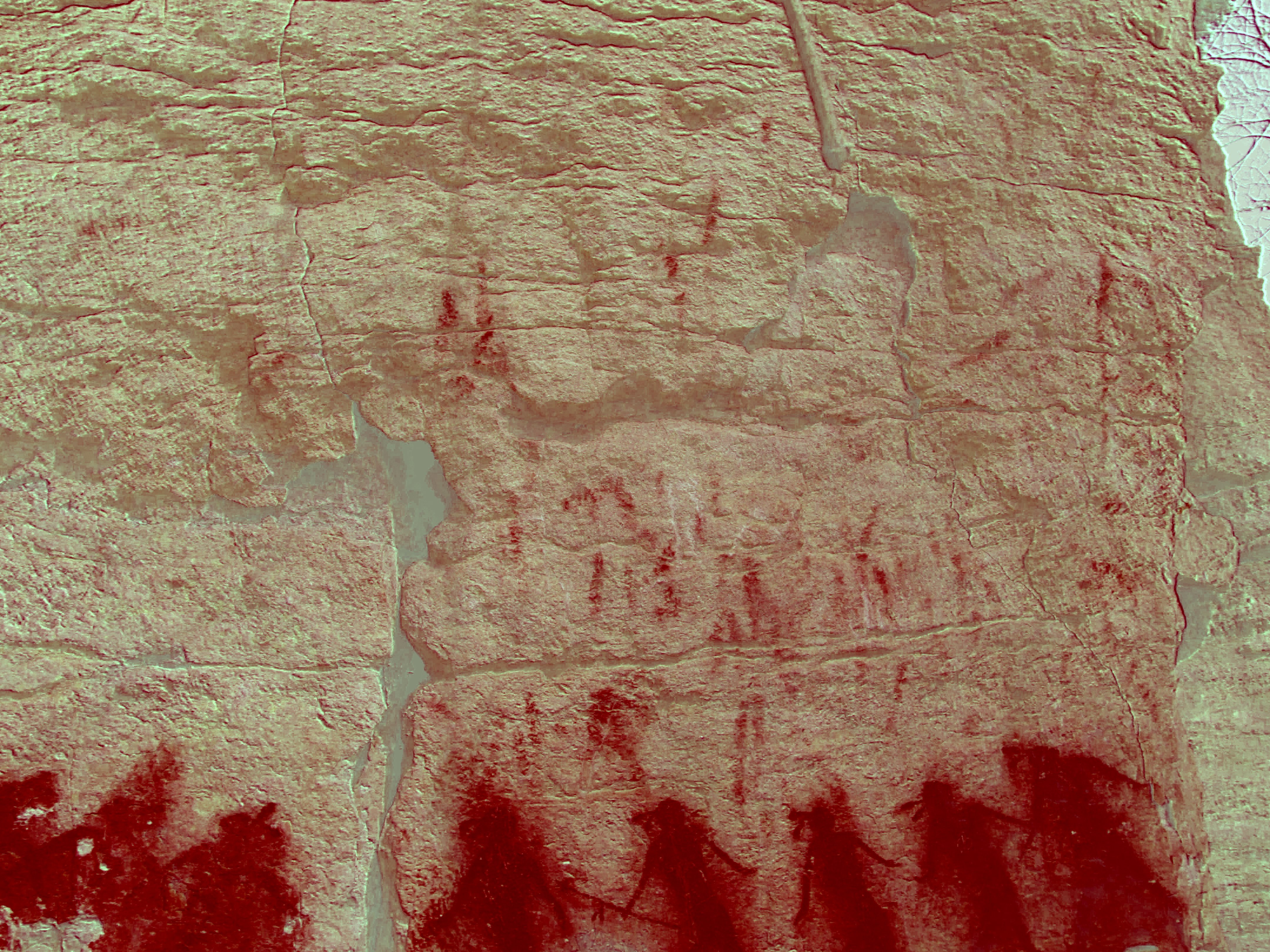 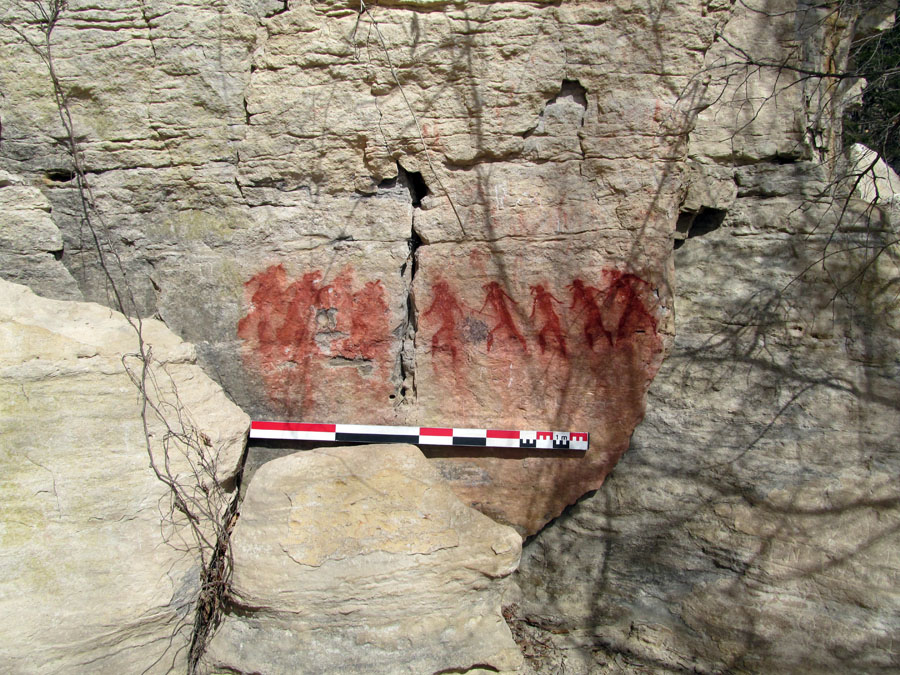 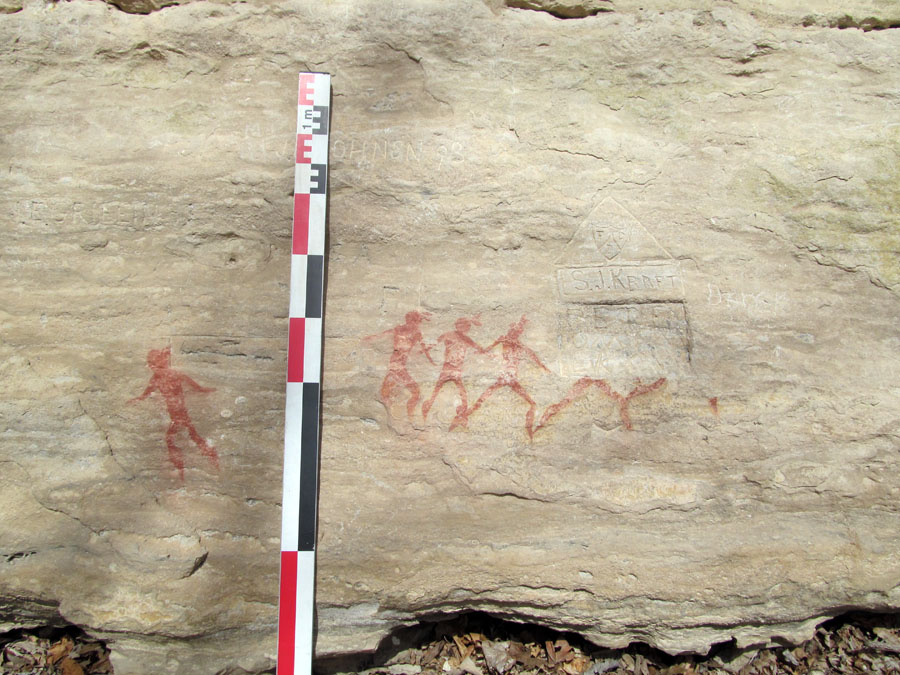 S. J. Kraft destroyed two of the six pictographs in this panel; the six man panel it is situated 1.6 meters (5 feet) to the left of the running men panel. Grant (1967:114) used a portion of this image (provided by Frank Magre) in his publication on American Indian rock art. The Salt River site was briefly discussed by Diesing and Magre (1942:11) where they suggest the pictographs represent a battle scene. The four undamaged figures measure (left to right) 21 cm, 18 cm, 17 cm, and 20 cm. The triangle design above the name of S. J. Kraft has a shield decoration distinctive to the Order of Knights of Pythias; the letters F C B stand for friendship, charity and benevolence. 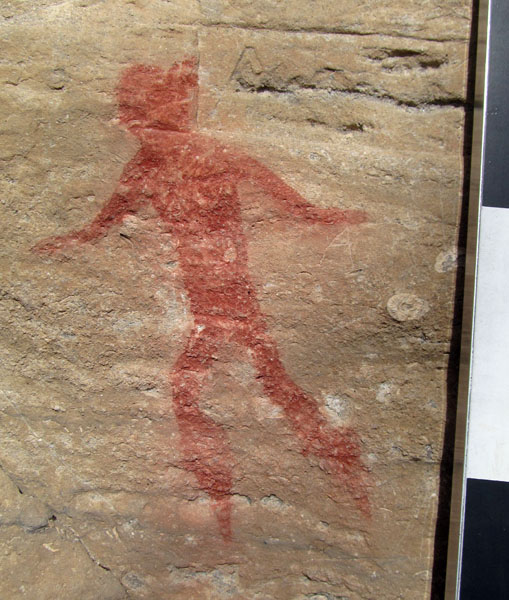 One of the figures was painted as running to the left while the others run to the right. 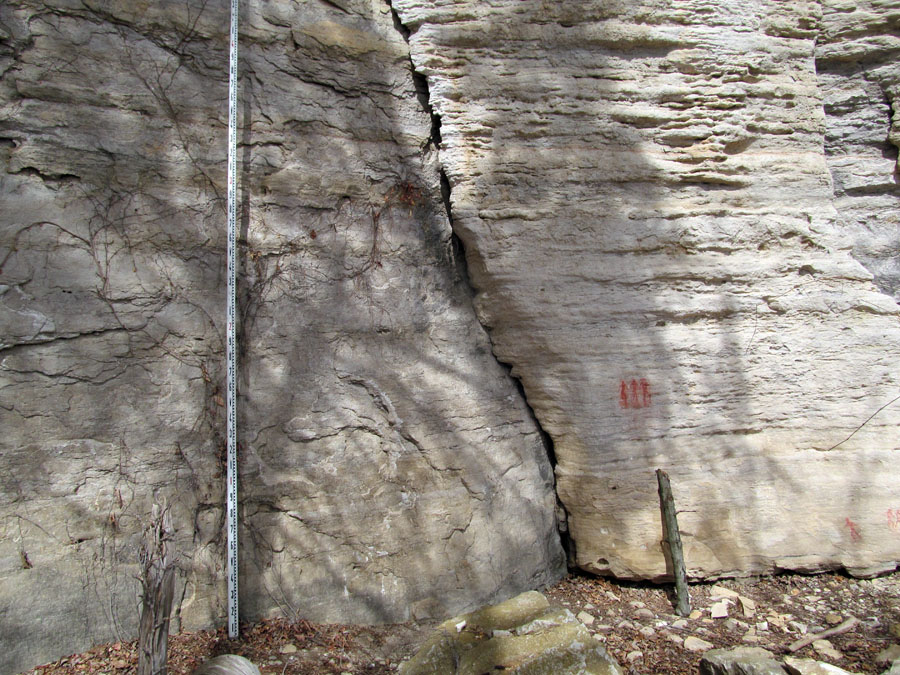 Approximately 1.5 meters to the left of the six runners is a small panel of 3 figures. 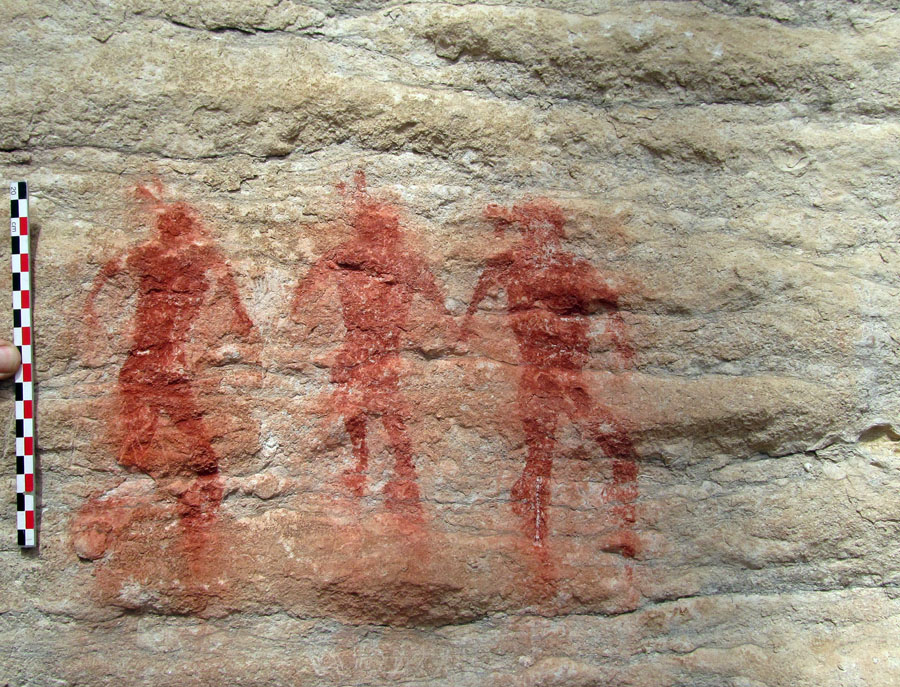 Closeup of the small panel of 3 figures. 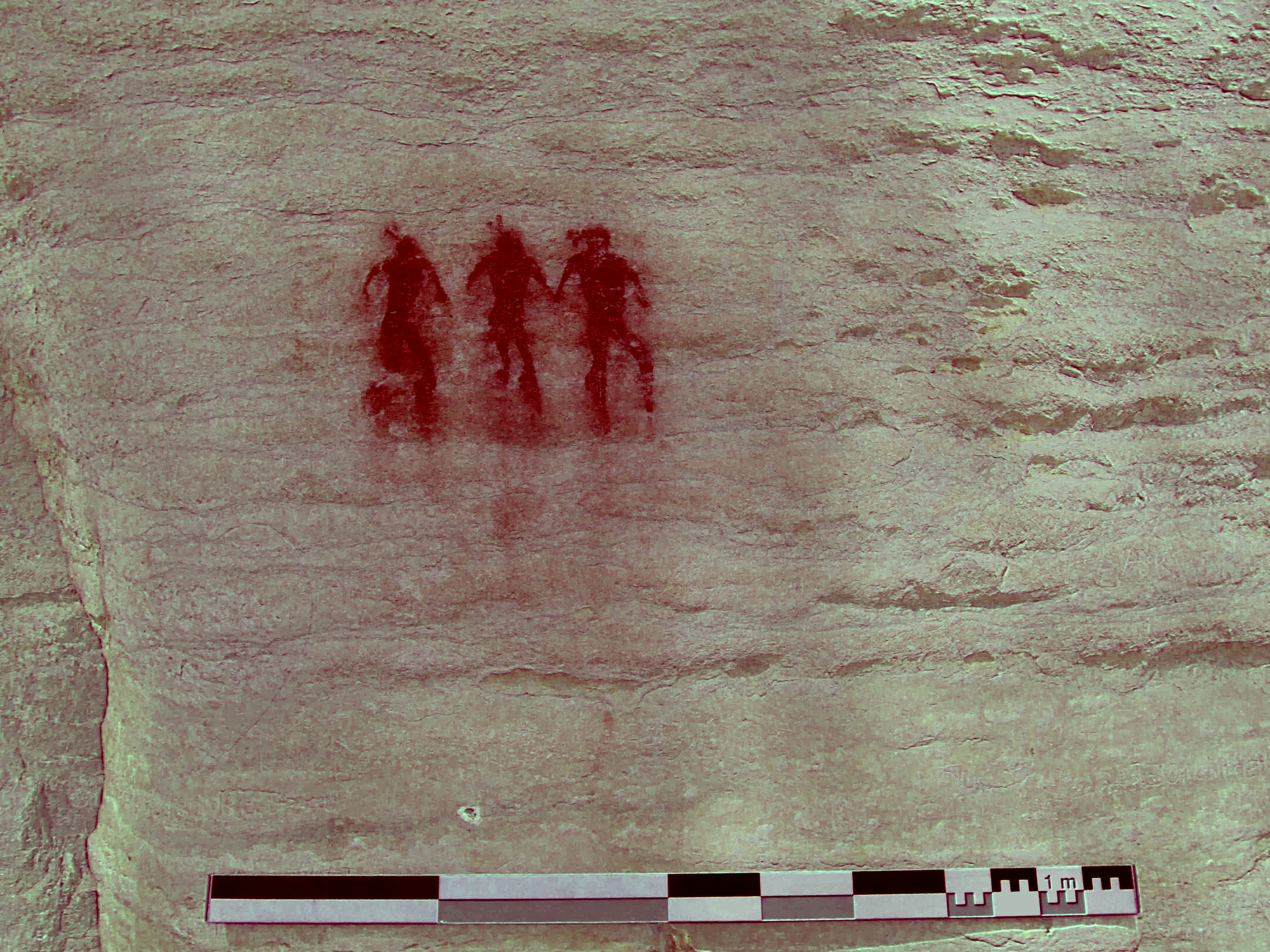 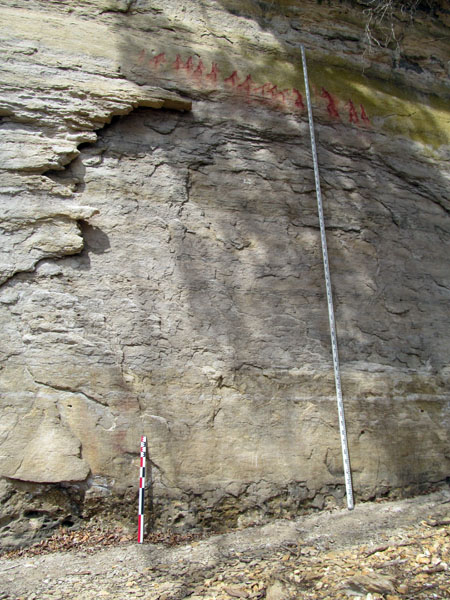 Three pictograph panels at the Salt River site are situated far above normal eye level. The central high panel, named by Magre (1971:2) is the most extensive and is situated 5.1 meters (16.7 feet) above the narrow ledge where the other pictographs are painted. Scale in lower left corner is 1.0 meter. 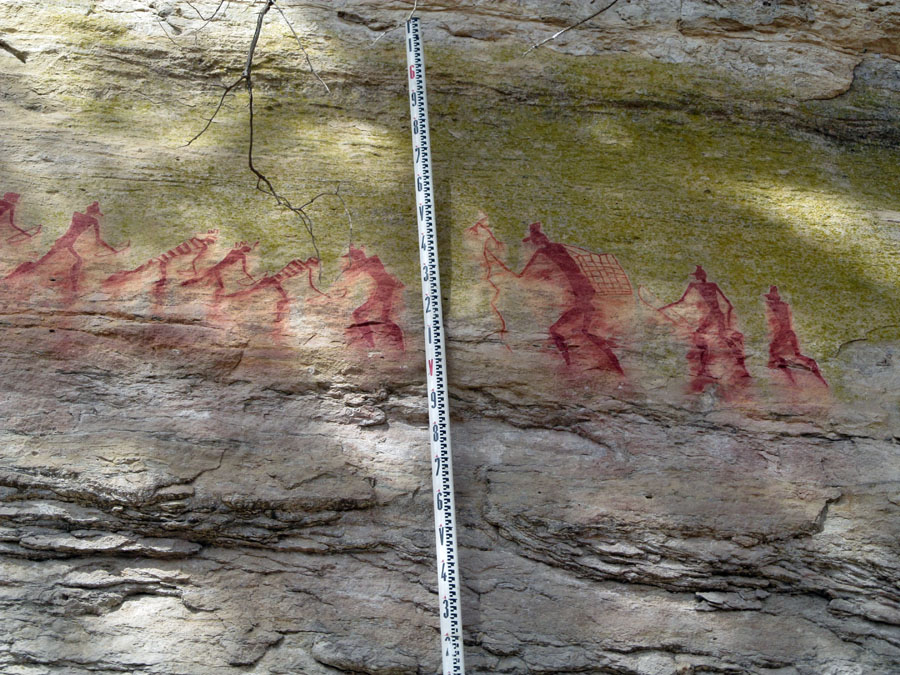 Closeup of the western high panel. Frank Magre (1971:2-3) argues that this panel was repainted between 1938 and the 1970s. Magre describes the large figure facing west as "depicted as wearing [an] arm bird wing and bird tail regalia. In is left hand or wing he holds a tomahawk in striking position as he encounters his opponents." Magre laments that "the person who repainted this probable battle scene more than likely saw the wing feather marks and interpreted tham as being a loosely woven basket. So now we have the once mighty tomahawk-swinging warrior depicted as a lowly domestic, with a basket on the back that at one time proundly displayed a hero's regalia." 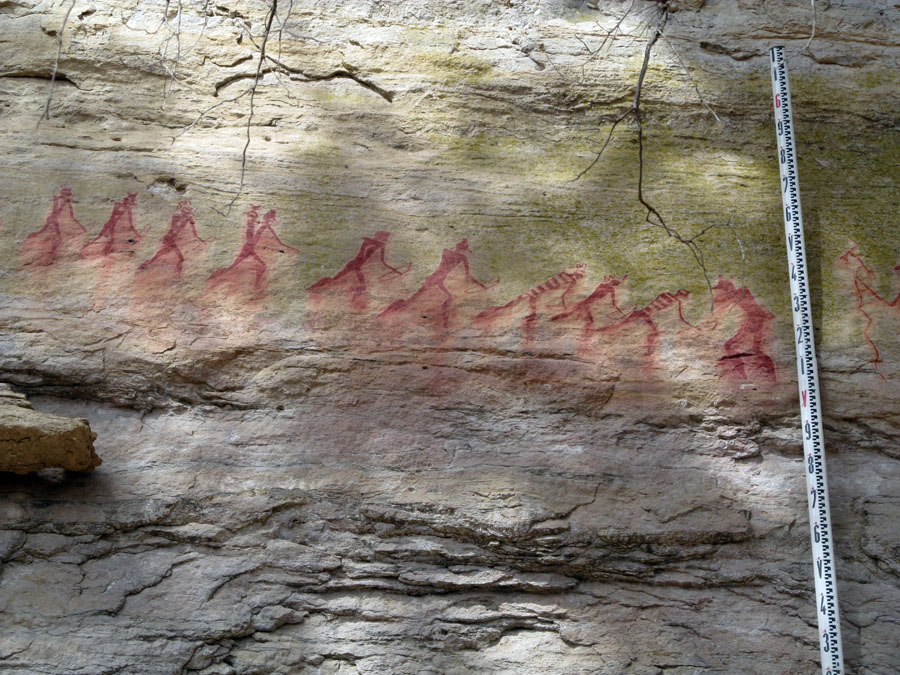 Closeup of the nine figures moving eastward in the central panel. Magre's drawing based upon the 1938 photograph taken by Diesing indicates that the bows held by figures were 20 century aditions to this panel. 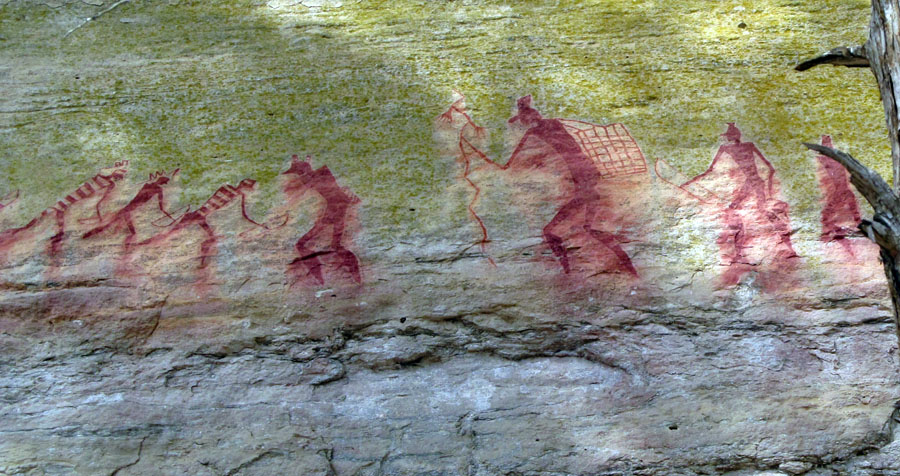 Three figures moving left to right in the central panel are shown wearing stripped garments (or body art) according to Magre's drawing based on the 1938 photograph taken by Diesing. The repainting of this panel resulted in the stripped design being covered up for the middle of the three stripped figures. 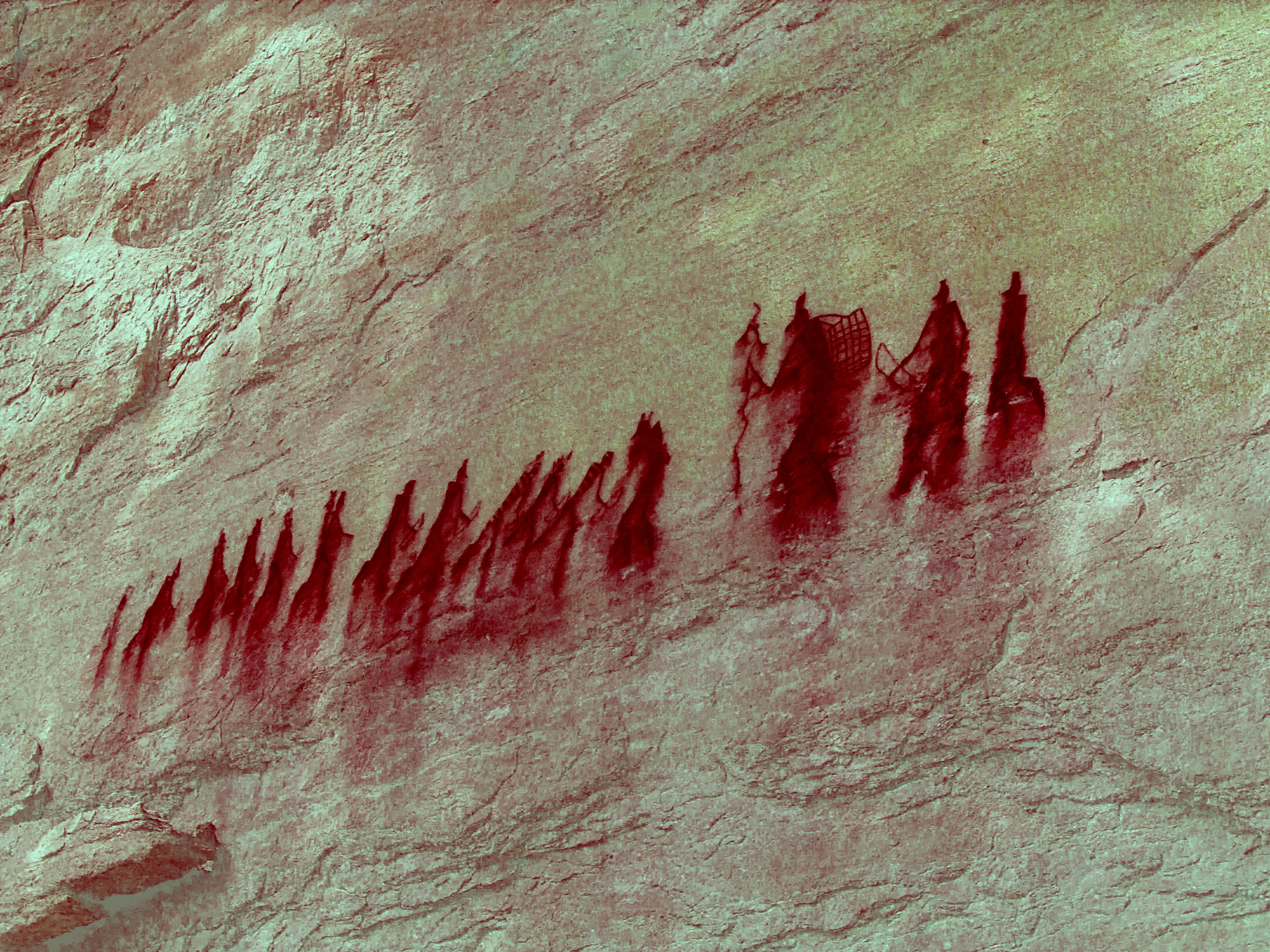 DStretched image of the central panel at the Salt River pictograph site does not provide any additional images. 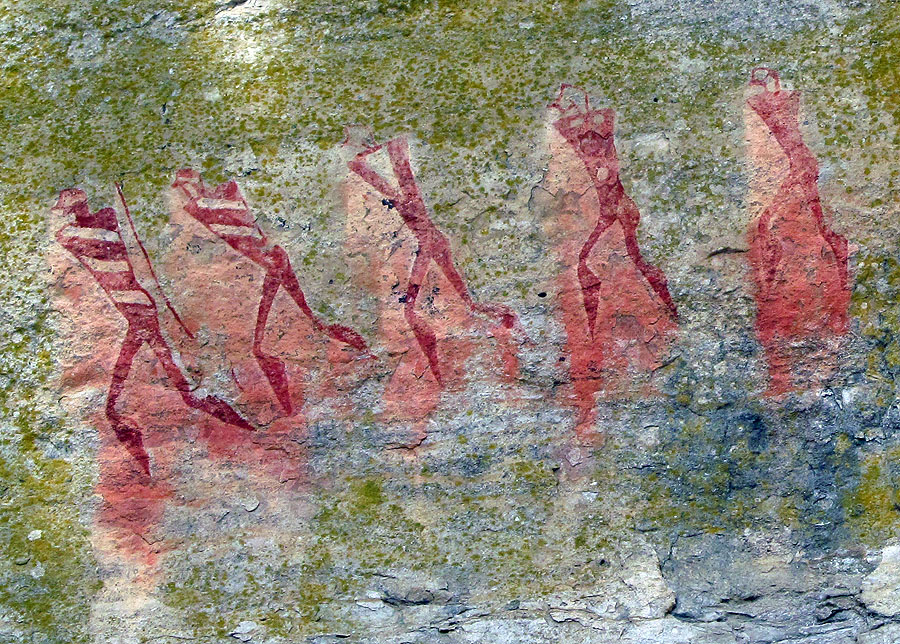 Five human figures (two wearing banded clothing or banded body art) are situated aapproximately 1.5 meters east (right) of the central panel. These figures are compressed into the central panel in the illustration prepared by Magre (1971:Figures 1 and 2). 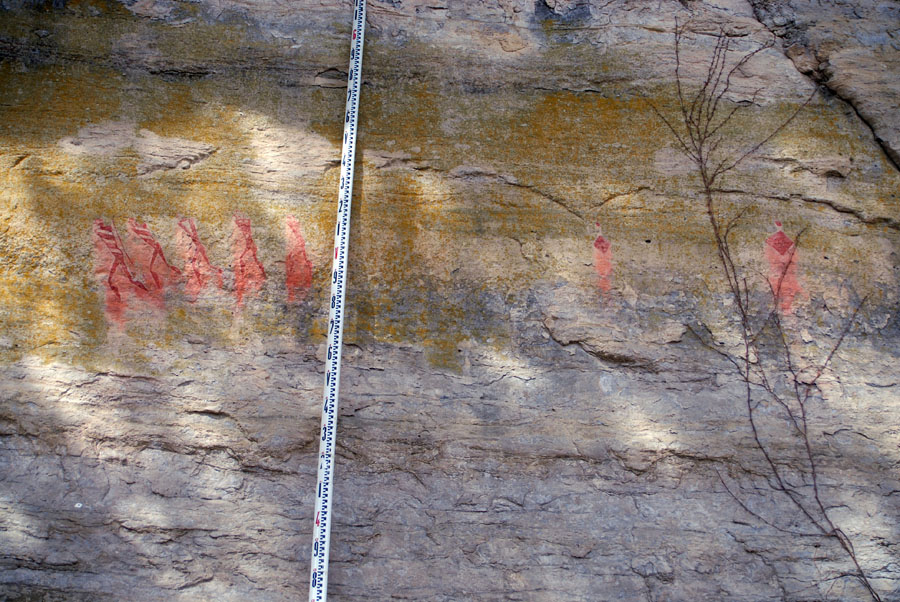 Approximately 1.5 meters to the east (right) of the five human figures are two diamond shaped pictographs that Magre (1971:2) interpreted as house or lodge symbols. 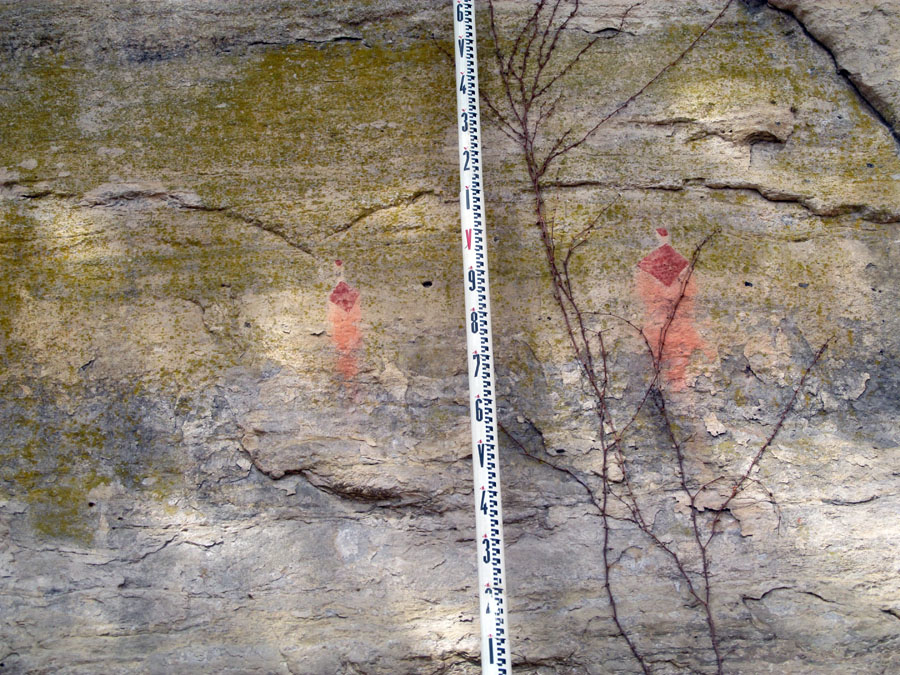 The two pictographs that Magre interpreted as house or lodge symbols have small red dots situated immediately above them. 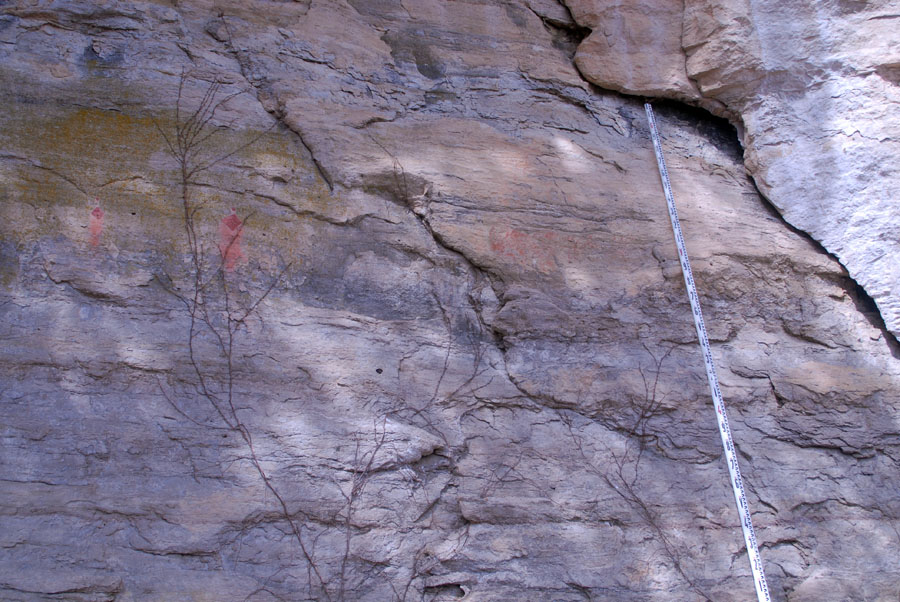 Approxiately 1.6 meters east of the two lodge symbols is a large, faint pictograph that was not repainted in the 20th century. 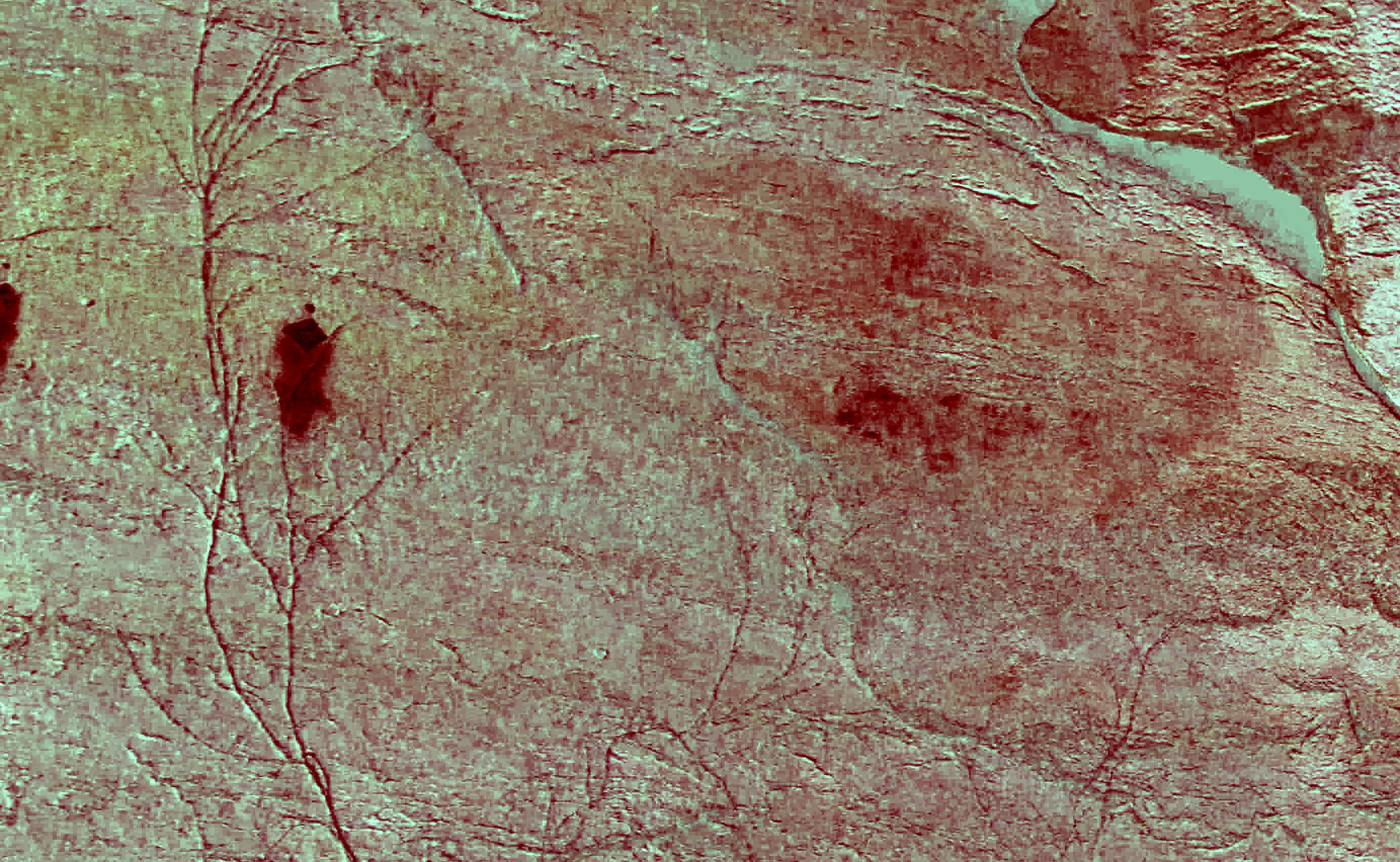 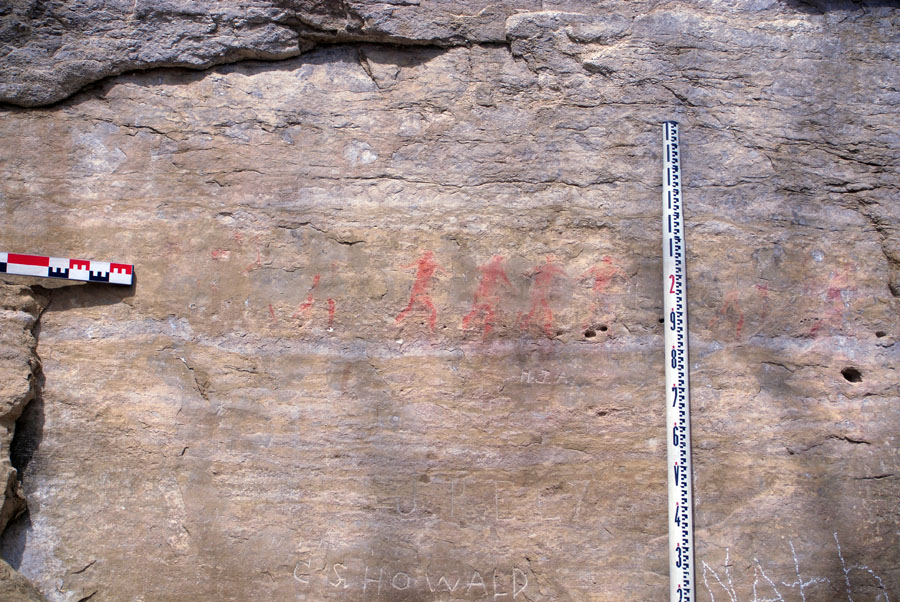 A faded panel, just above eye level (1.9 meters), is situated west and below the central panel. This panel is situated on the western edge of the Salt River pictograph site. 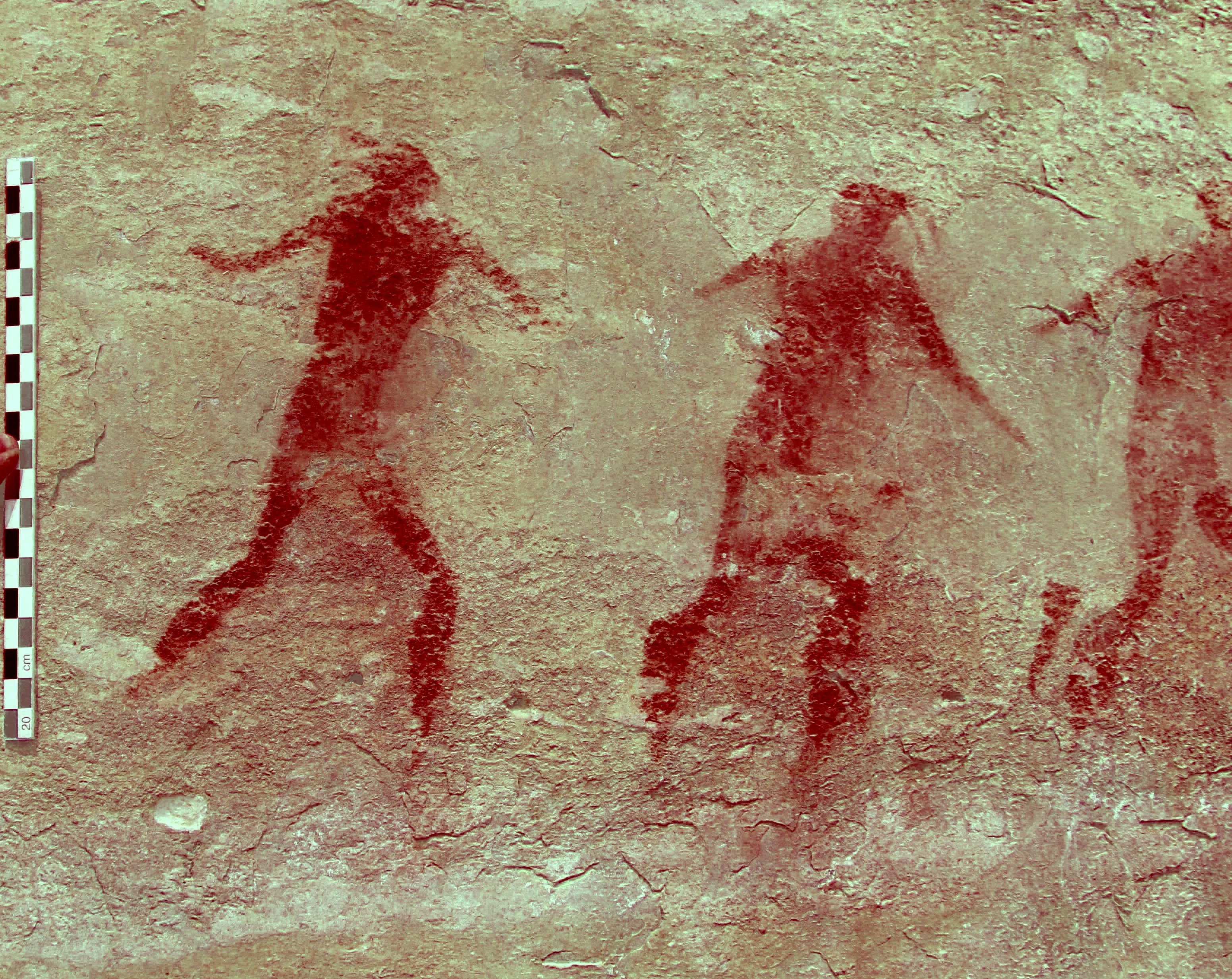 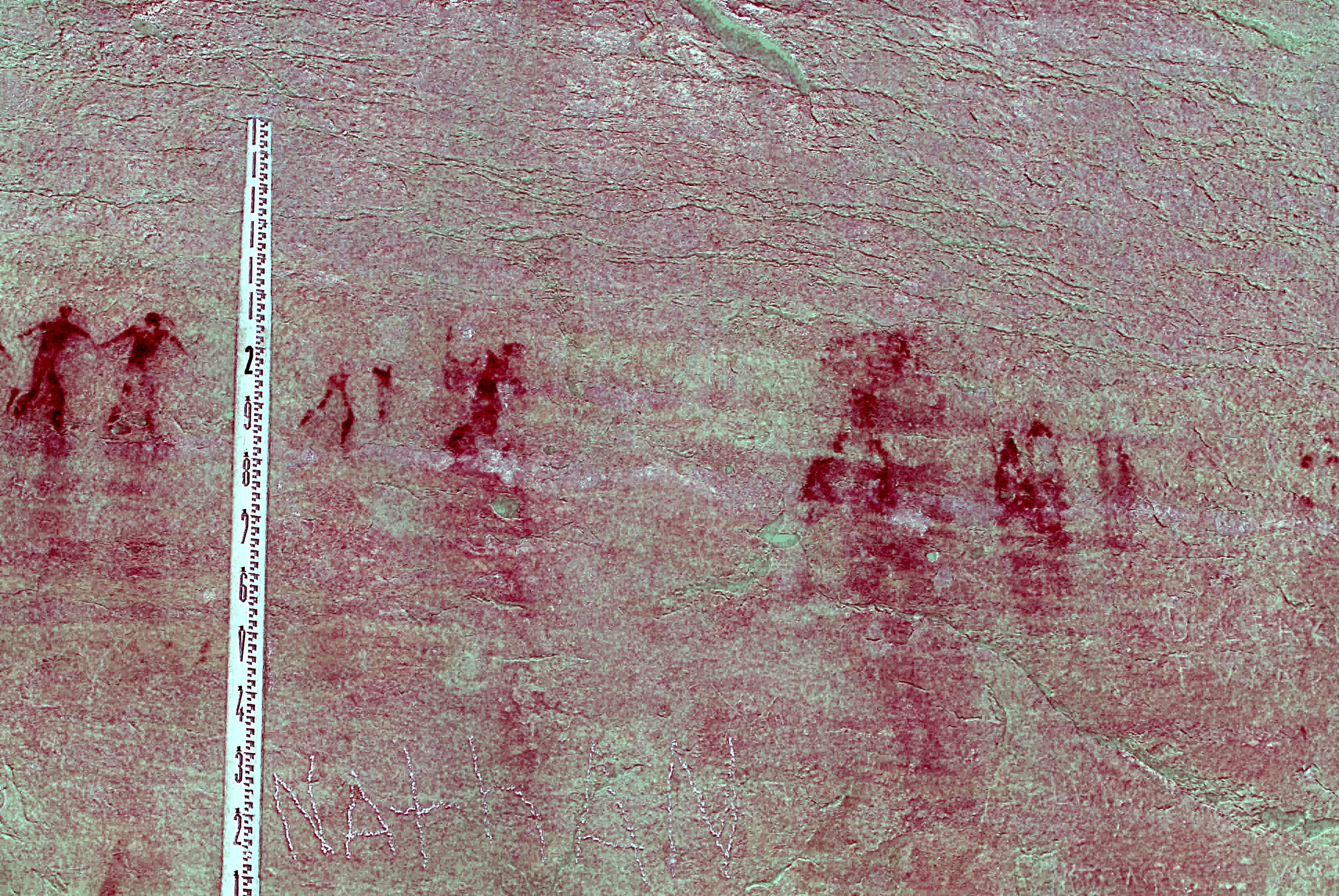 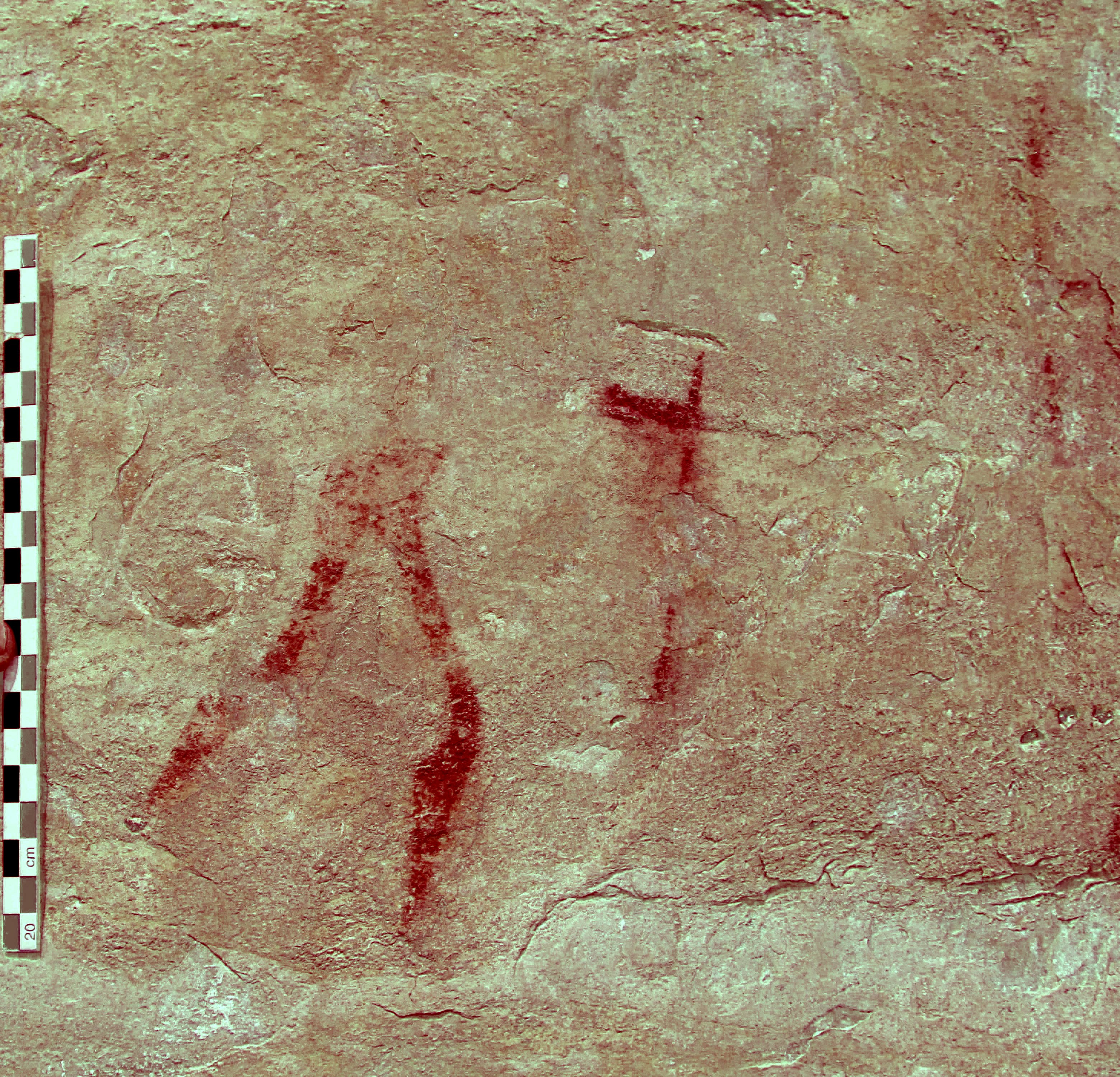 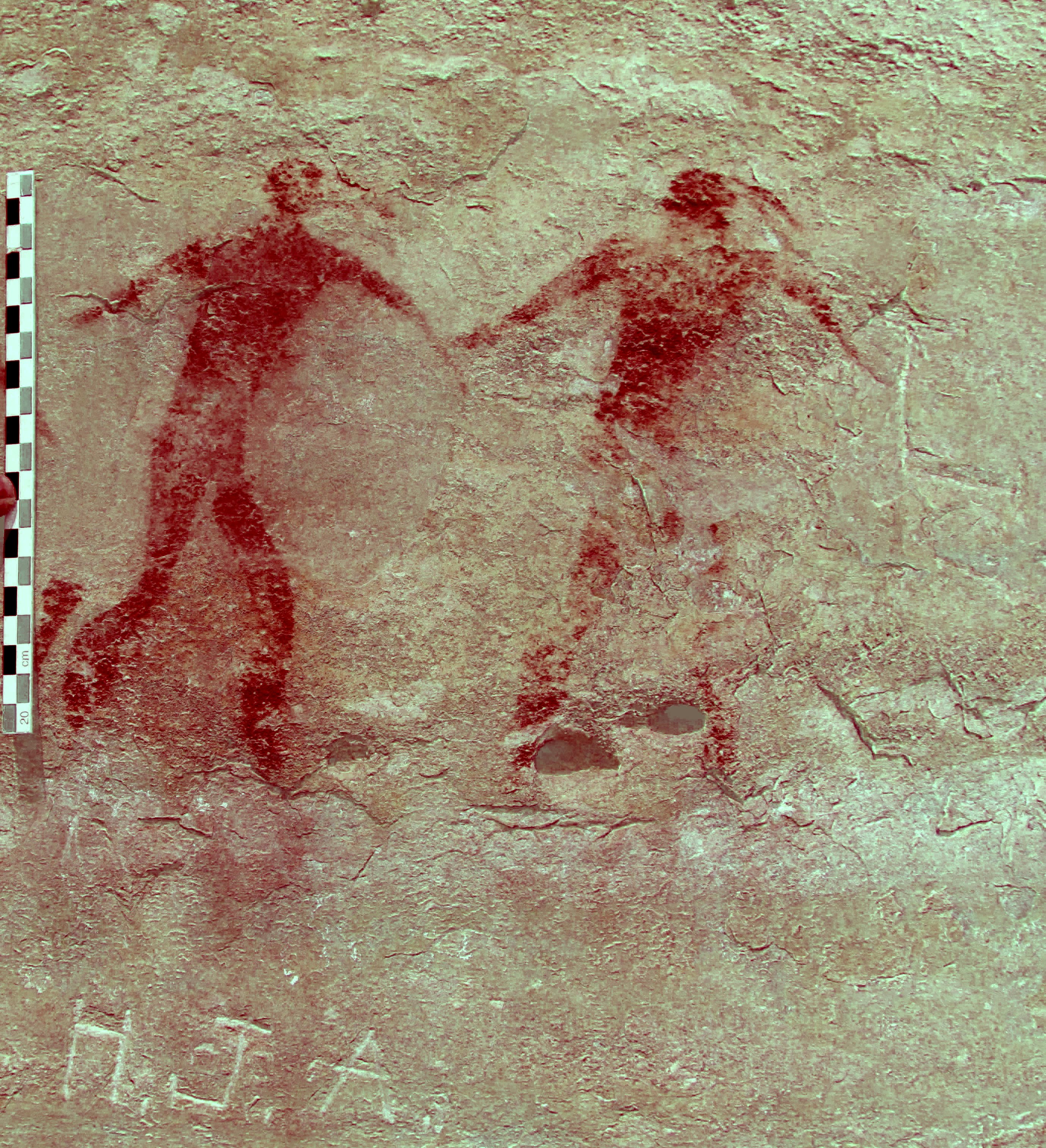 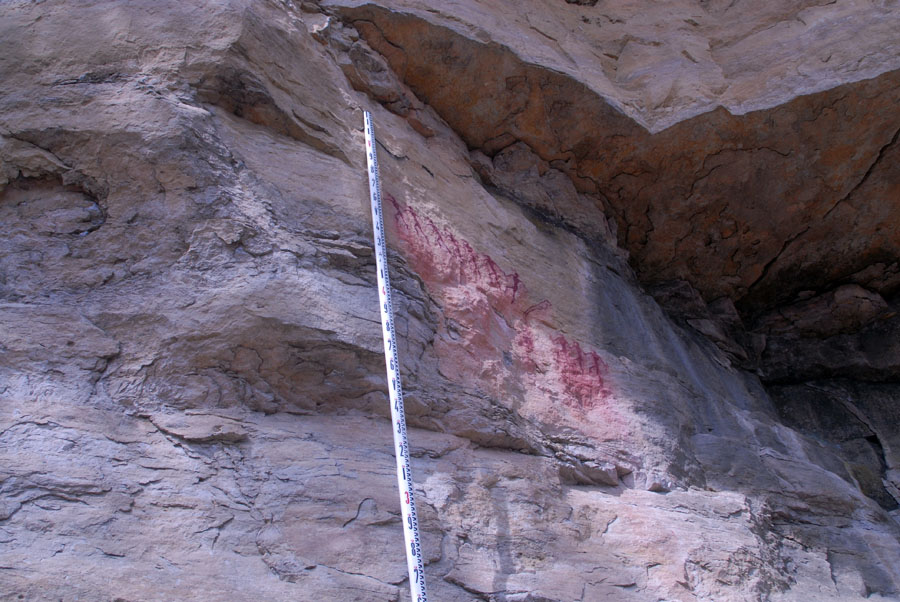 Another "high" panel is situated at the east edge of the Salt River pictograph Site. It is situated 4 meters above the narrow ledge surface of the site. 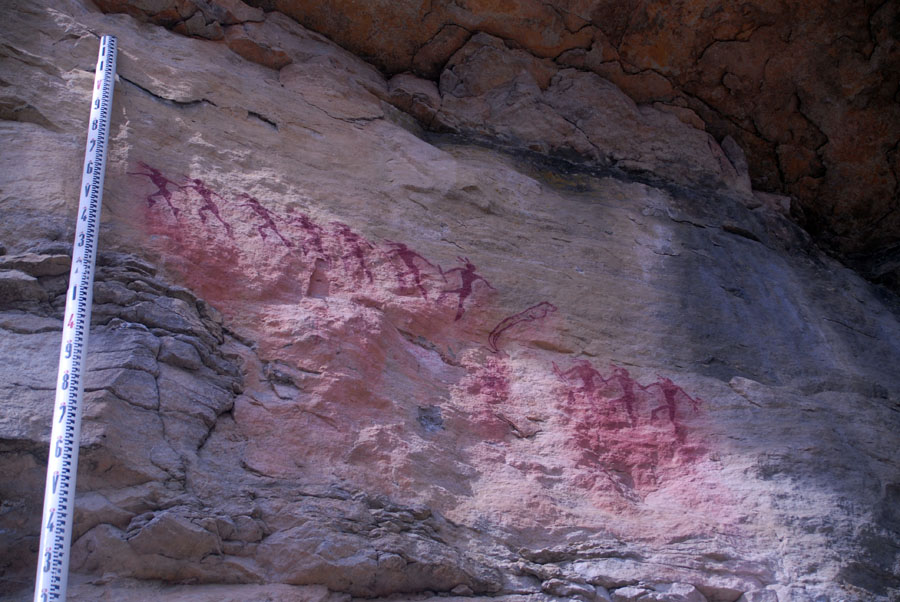 The vivid color and smeared character of the eastern panel makes it clear that it has been repainted. The addition of a smoking campfire is very unfortunate. 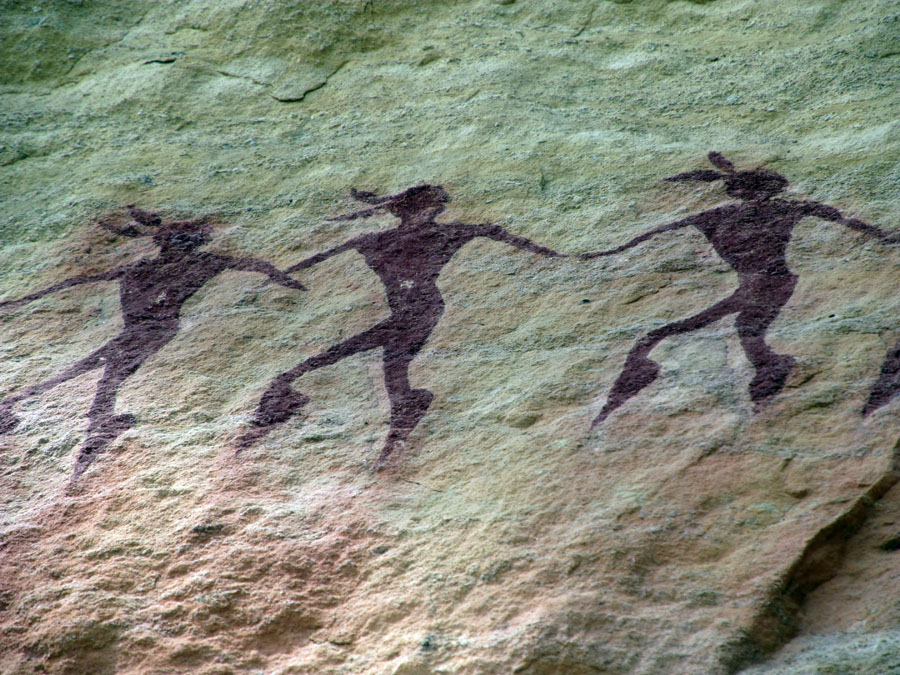 Detail of three figures (dancers?) in the eastern panel. 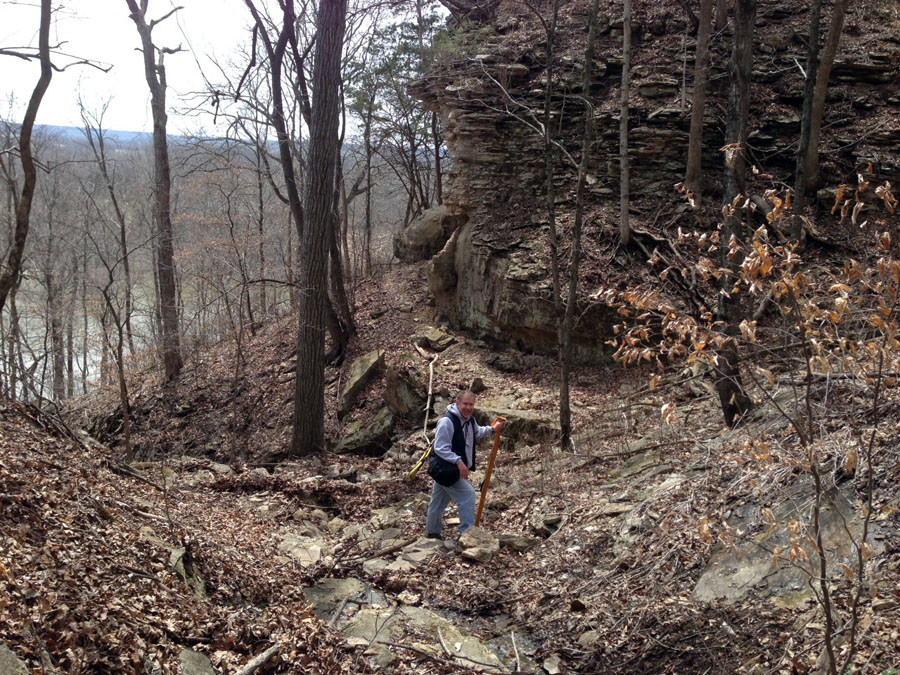 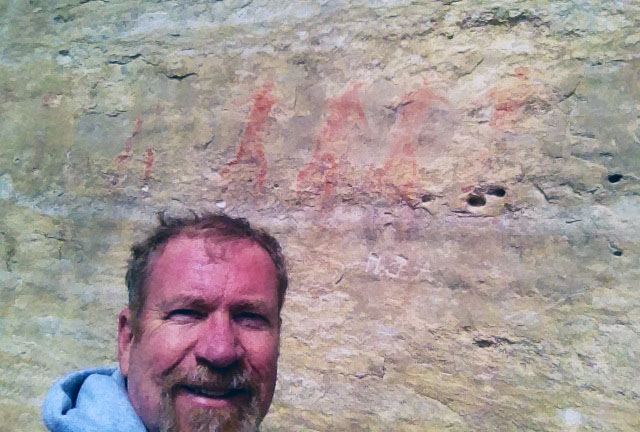 Self photograph with the faint pictographs of the western panel of the Salt River Pictograph site (23RA101).