An imaginative sketch of the Osage Trail leading west from the stockade and tower of colonial St. Louis. This sketch was published in A History of the City of St. Louis and Vicinity, From the Earliest Times to the Present by John Devoy (1898). 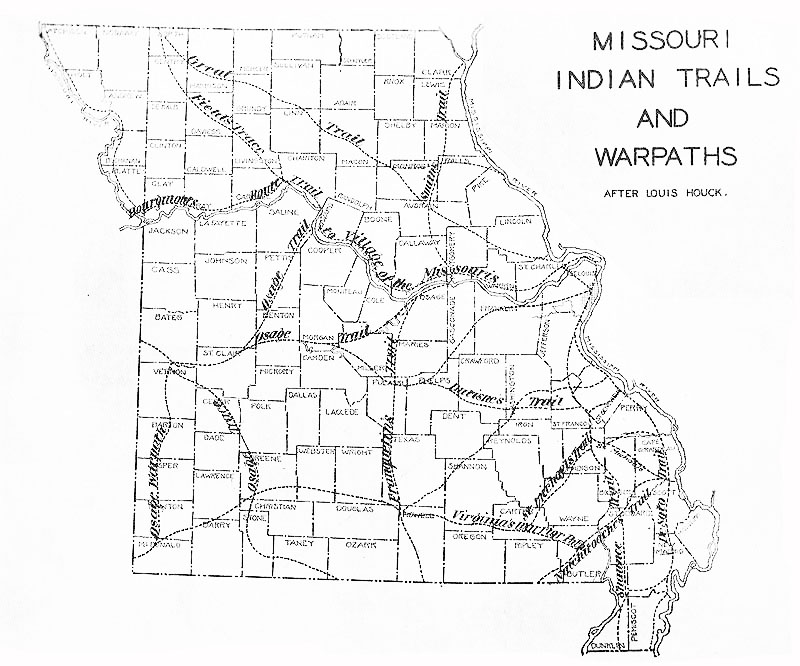 A map published in A History of Missouri from the earliest explorations and settlements until the admission of the State into the Union (1908:226) by Louis Houck shows 4 trails radiating from St. Louis city. This version of the map was published in the Missouri Magazine (April 1936), page 16. It was redrawn by Professor Rafferty (1982:25) and used in the Historical Atlas of Missouri. The North and Northwest trails crossed the Missouri River and turned westward towards the Missouri Indian villages; this trail would be called the Boone's Lick Trail that eventually linked to the Santa Fe Trail (Globe Democrat 1911). The Western trail is the Osage Trace that would be called the Wire Road during the Civil War. The Southern Trail is the El Camino Real/Natchitoches Trace, also called the Old Spanish road. 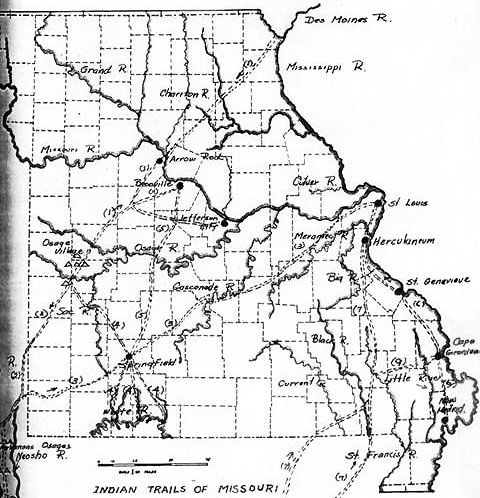 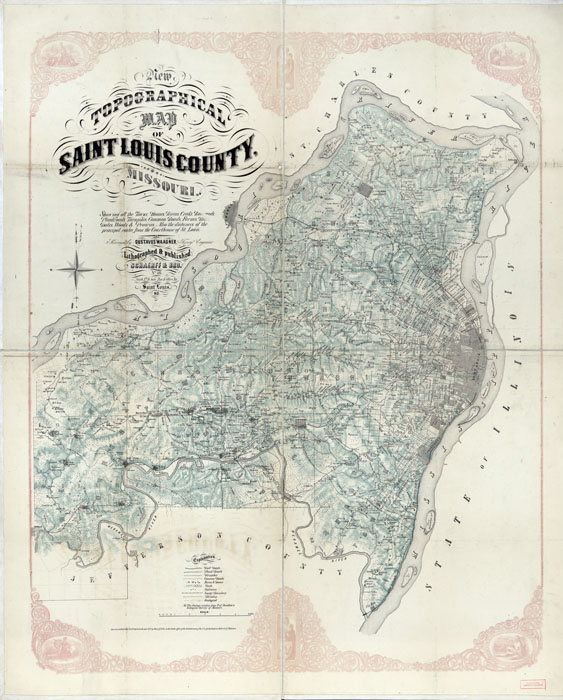 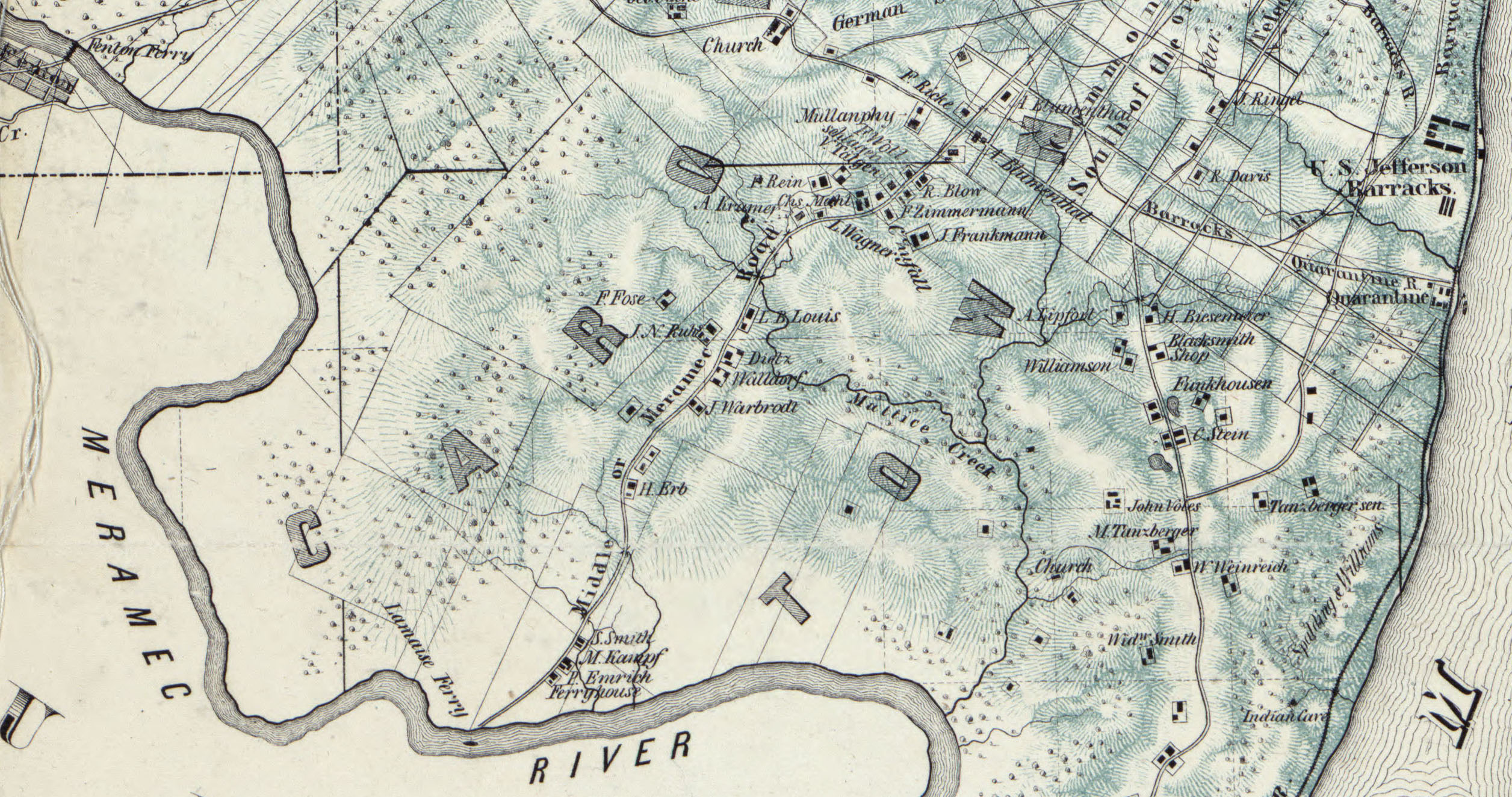 Detail of the combined El Camino Real/Natchitoches Trace on the St. Louis topographic map published in 1857. The Middle Meramec Road crossed the Meramec River at Lemay Ferry - labeled as "La Maise Ferry" in honor of its owner - Francois LeMais (Magnan and Magnan 1996 :212). It is interesting that Cliff Cave (a St. Louis County park) is labeled as "Indian Cave" on the SE corner of the map. 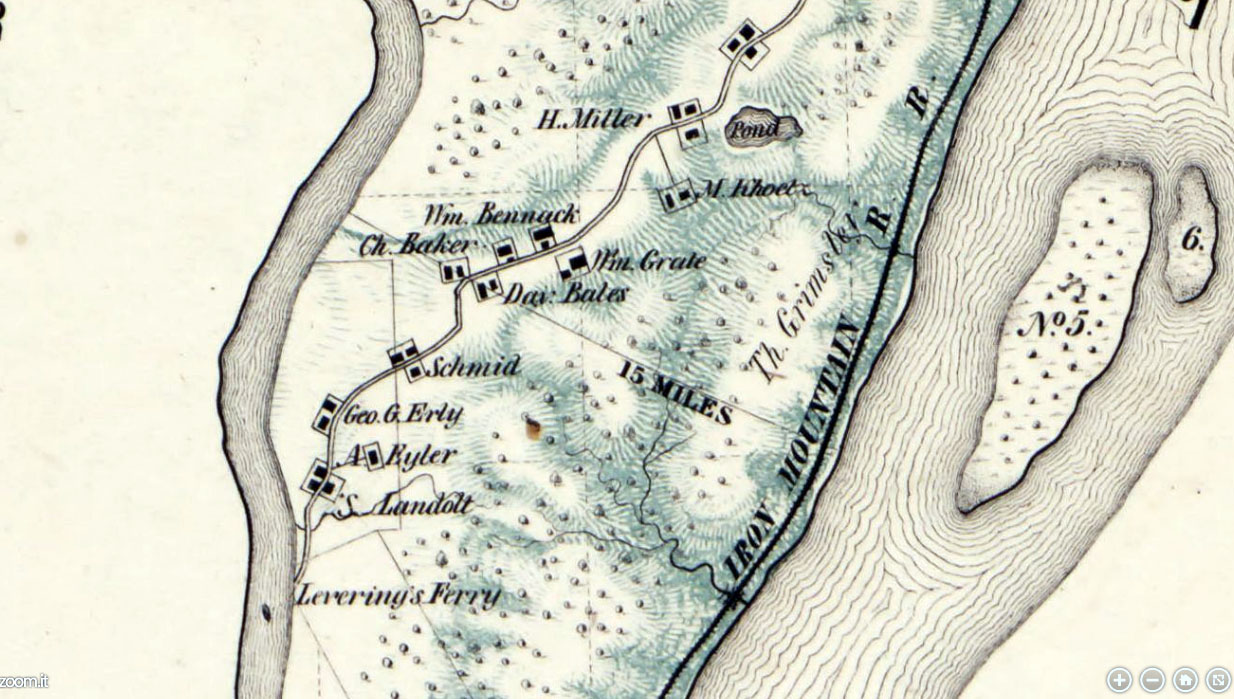 BUT... the 1857 topographic map shows another candidate for the Meramec River crossing as Leverings ferry along modern Telegraph Road at a point approximately a mile downstream from the La Maise Ferry. Which modern road follows the El Camino Real/Natchitoches Trail? My answer is "both." Parallel branches could arise for several reasons: degradation of the original trail, natural hazards, fear of ambush, etc. Two competing branches of the Boone's Lick Road caused a headche for the Daughters of the American Revolution during the early 1900s; citizens of Fulton and Millersburg threatened lawsuits if the trail markers were not "correctly" placed in their communities (Globe Democrat 1913c). An undated, unsigned letter (circa 1913) supports the idea of the Telegraph road ford as part of the El Camino Real/Natchitoches Trail. The letter describes that the El Camino Real/Natchitoches Trail "crossed the Meramec at the lower ferry where the Telegraph road crossed, followed, practically the same route as Telegraph road to where it comes into the Le May ferry road to Bobrink, then to the River des Peres, which was the southern boundary of Carondelet, forded it beween what is now Michigan Avenue and Broadway, followed Michigan Avenue to Elwood Street, where it ran into Broadway, followed Broadway to 2nd Carondelet Avenue, then to Main Street." 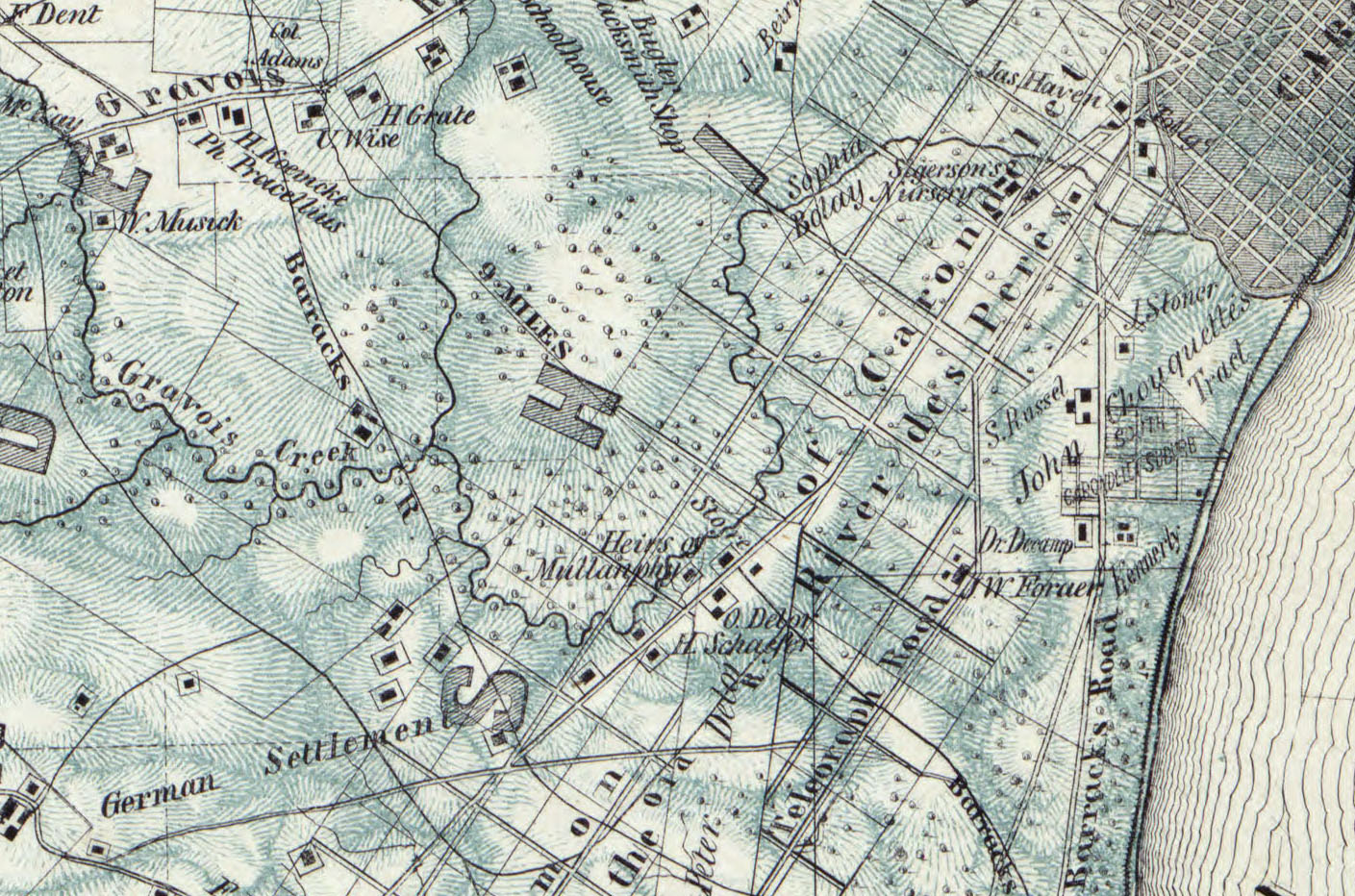 Carondelet Avenue during the Colonial Period was Vide Poche (French, Empty Pocket) outside of the town wall and Rue d'Eglise (French, Church Street) inside the town walls Magnan and Magnan 1996:24). The name of Rue d'Eglise was replaced with Second Street. Of interest on this portion of the map is the residence of F. Dent (upper left hand corner of the map) that is now the Ulysses S. Grant National Historic Site. 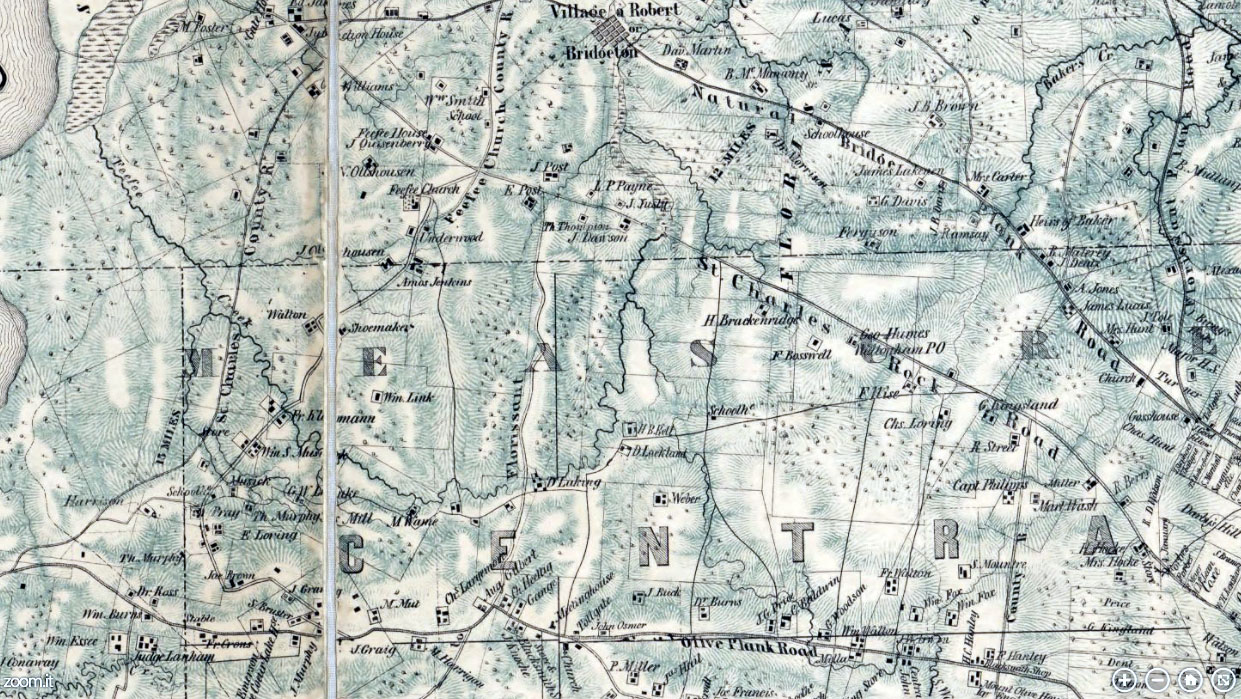 19th century historians noted that the trail running Northwest from St. Louis became St. Charles Road. An article published in the Post-Dispatch in 1921 notes that the road was mentioned in an 1818 county court record when the communities of Maries des Liardes and Owen's Station petitioned for a relocation of a portion of the trail. The 1921 Post-Dispatch article named the trail as "Rue d'Roi" (French, Kingshighway). The 1857 topographic map shows an equal amount of settlement along both St. Charles and Natural Bridge Roads. Which was the trail leading to St. Charles? The answer is "both." 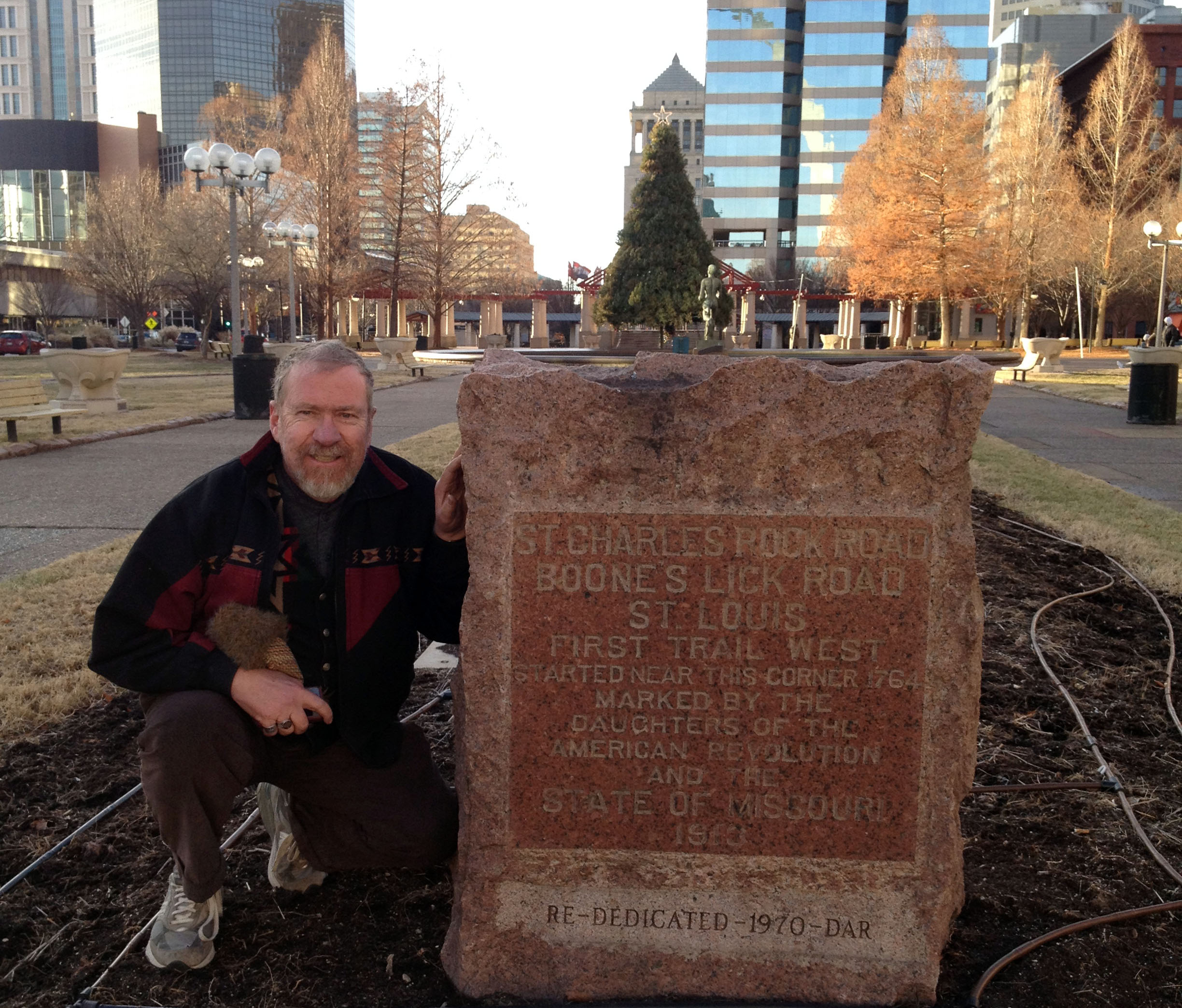 The Daughters of the American Revolution placed three granite markers to document the importance of St. Charles Rock Road (Globe Democract 1913a). The first was placed at the southeast corner of Courthouse Squre. The second was placed at the southeast corner of the former campus of the Christian Brothers College (today, the corner of Martin Luther King Ave. and North Kingshighway). I was not able to find the second marker. 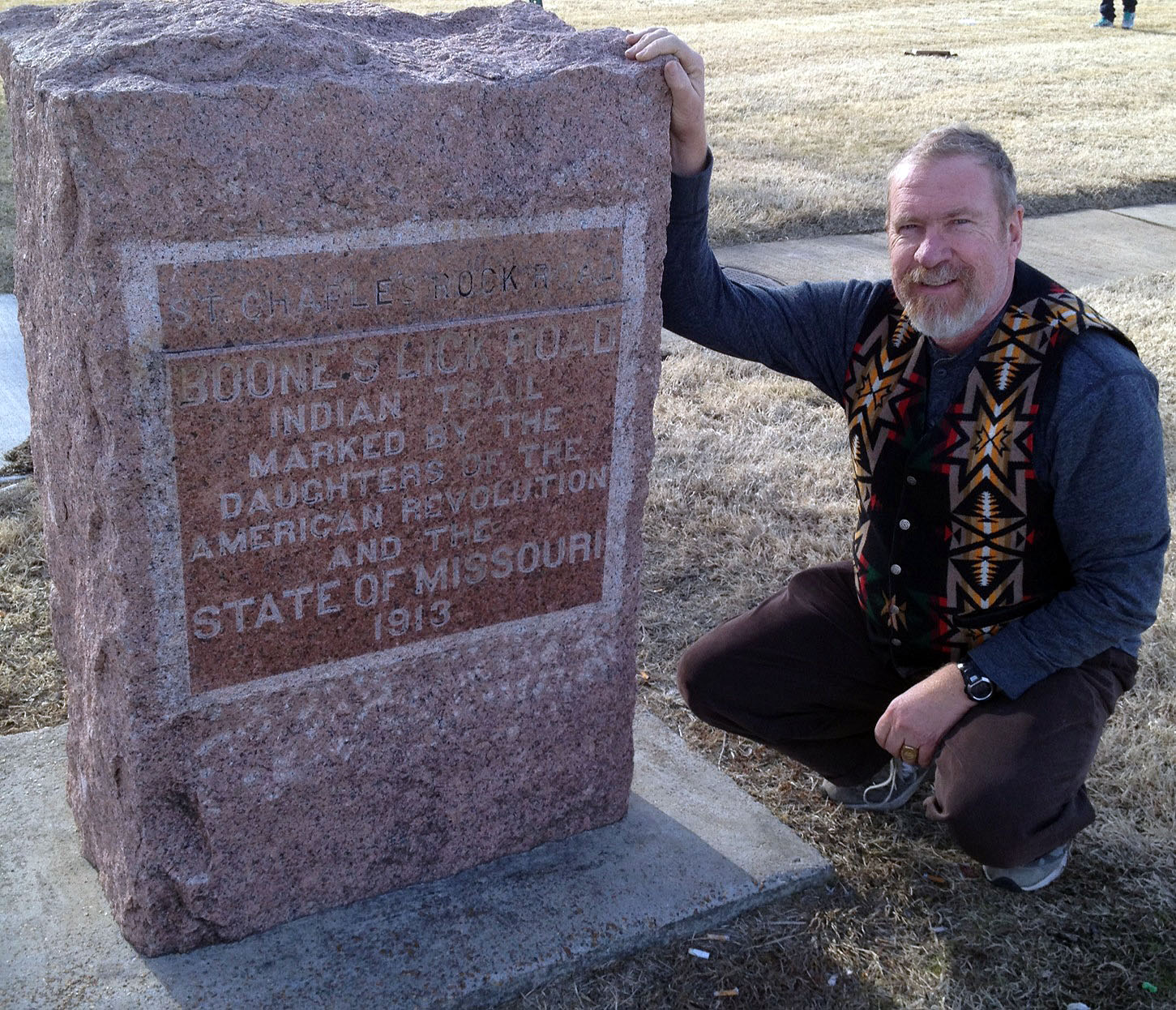 The third marker was placed by the Daughters of the American Revolution at the junction of St. Charles Road and Natural Bridge Road; the markers were to celebrate the eastern end of the Santa Fe trail. The newspaper articles described the trail: "It was the custom in the days of the Old Trail for travelers to stop at the old Planters' Hotel, Fourth and Chestnut streets, going from there north on Fourth street to the old St. Charles rock road, now Franklin avenue. On the road they would go direct to the Missouri river, crossing on the ferry, and then striking the Boone's Lick road to Old Franklin. Here they took the Sante Fe road and went on down to Mexico or out to Ogden" (Globe Democrat 1913b). 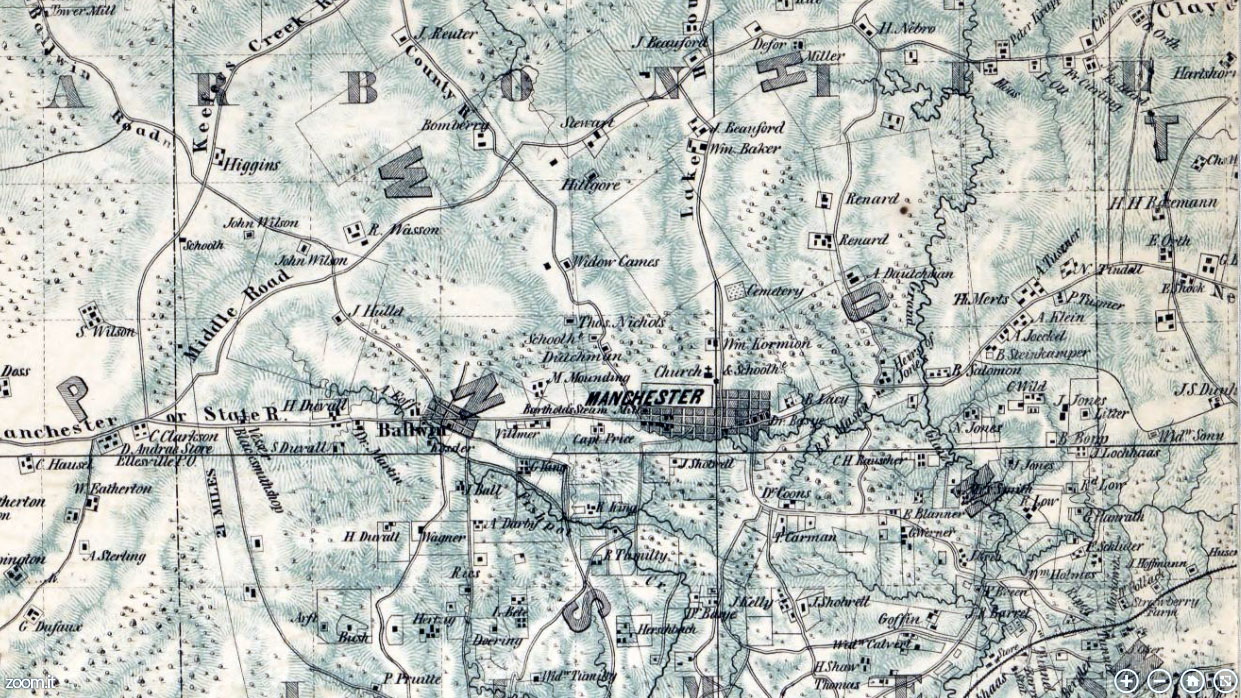 One 19th century historian proposed that the trail running Southwest from St. Louis became Manchester Road - also called Old State Road and Springfield Road (St. Louis Star 22 December 1916). That trail would become Highway 66 that passed through the modern communities of Brentwood, Kirkwood, Des Peres, Manchester, Ballwin, Grover, Pond, Fox Creek and Gray's Summit. An article published in the St. Louis Star (1916) reported that the St. Louis alderman changed the name of Old Manchester Road to Southwest Avenue in 1916. The article notes that Old Manchester Road began at "Market street to Vandeventer Avenue, then turned to the right and ran along a half curve till it swung into Manchester avenue again at the city limits. The two roads parted at Chouteau Avenue." Ingenthron (1970:73) notes that the Osage Trace was also called the "Kickapoo Trace" by White settlers during the 19th century. 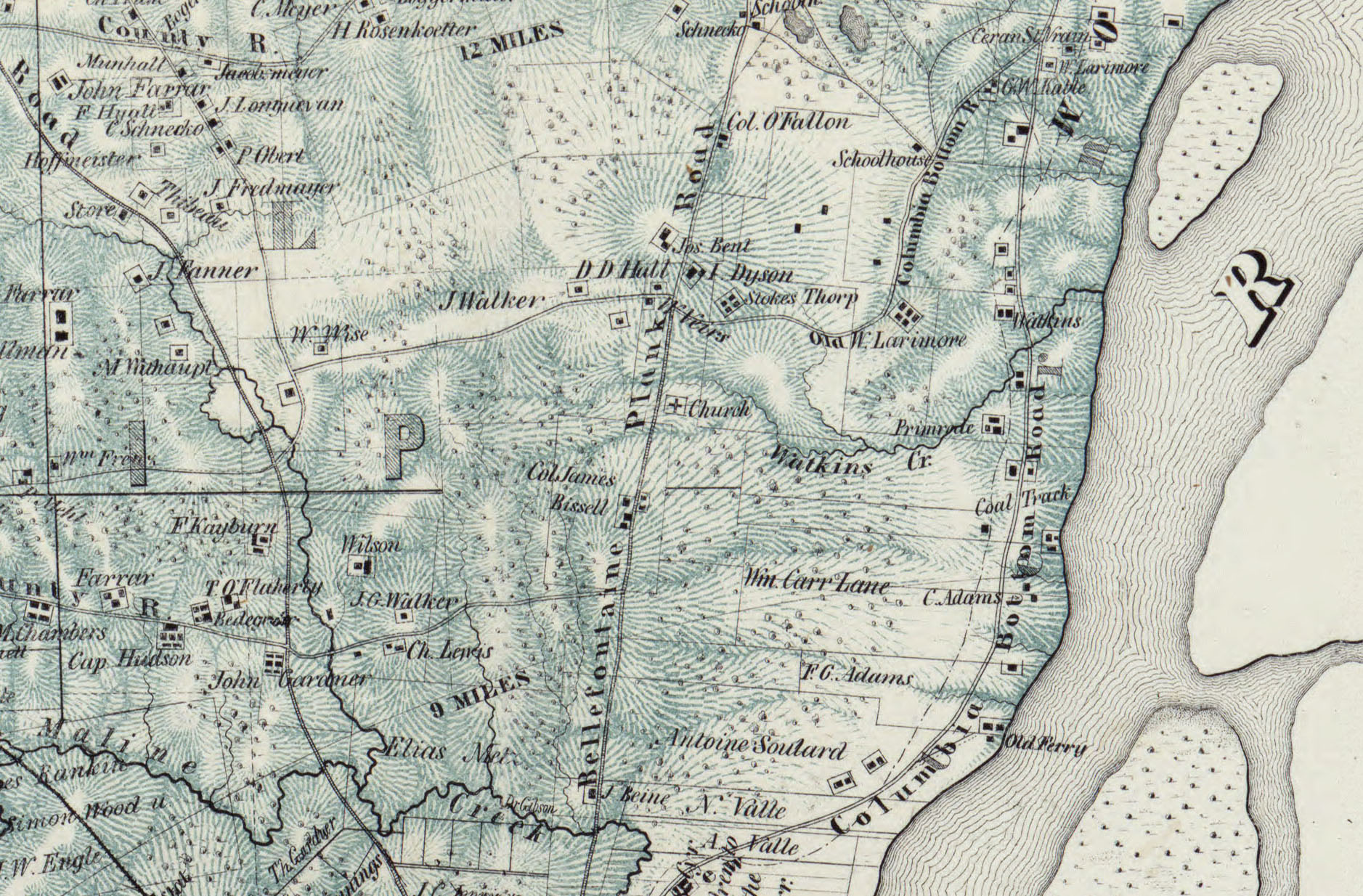 The trail running North from St. Louis became Bellefontaine Road and passed by the homes of Bissel and O'Fallon. One 19th century account describes Native American burial mounds on the O'Fallon farm. 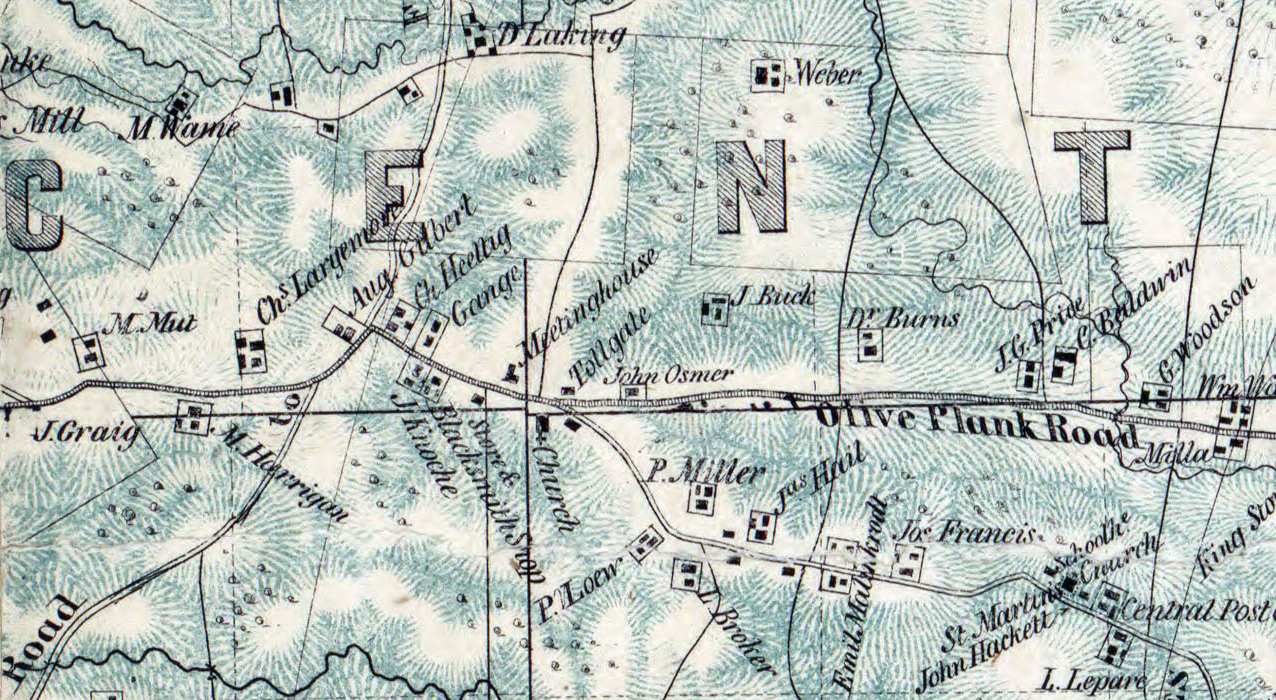 The map of Indian Trails prepared by Martha May Wood shows a trail running to the Northwest. Russell M. Weisman, Senior Historic Preservation Specialist / Archaeologist at Missouri Department of Transportation, determined that the road running Northwest from the city of St. Louis is Olive Street Road. 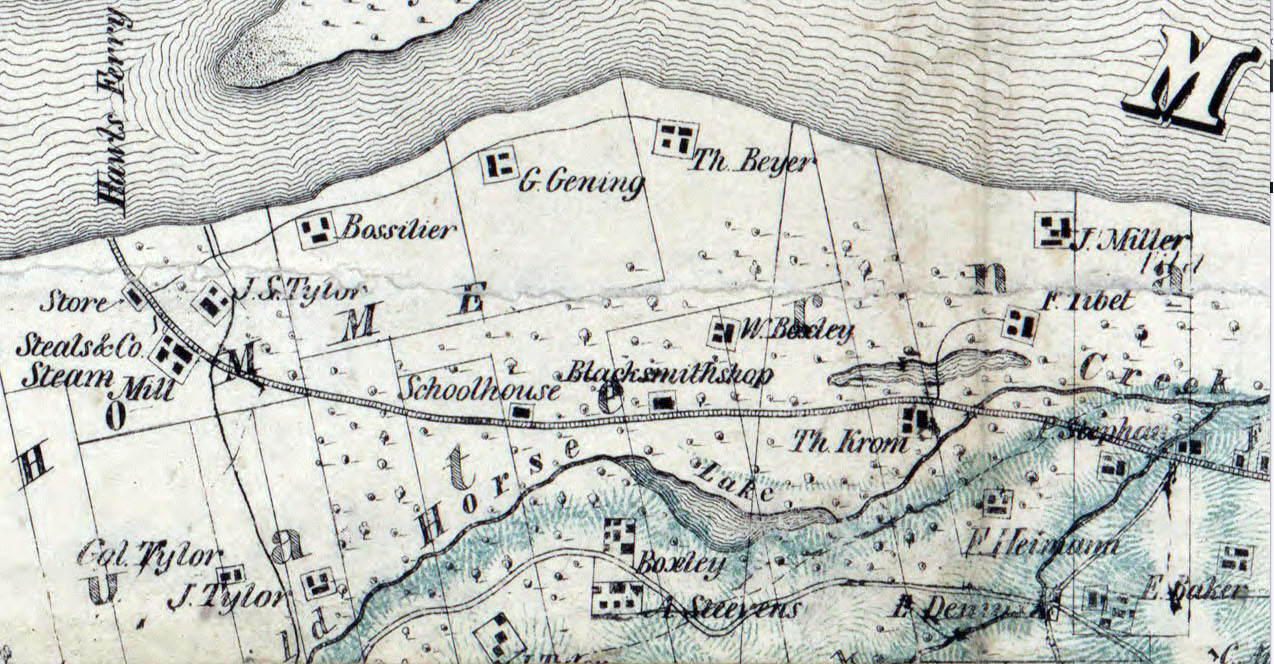 Olive Street Road would terminate at a ferry on the Missouri River. The 1857 topographic map names the ferry as Hawls Ferry while an earlier plan (Hutawa 1847) names the ferry as Lewis' Ferry. Another name for the ferry is Howell's ferry (Weisman 2012:24). 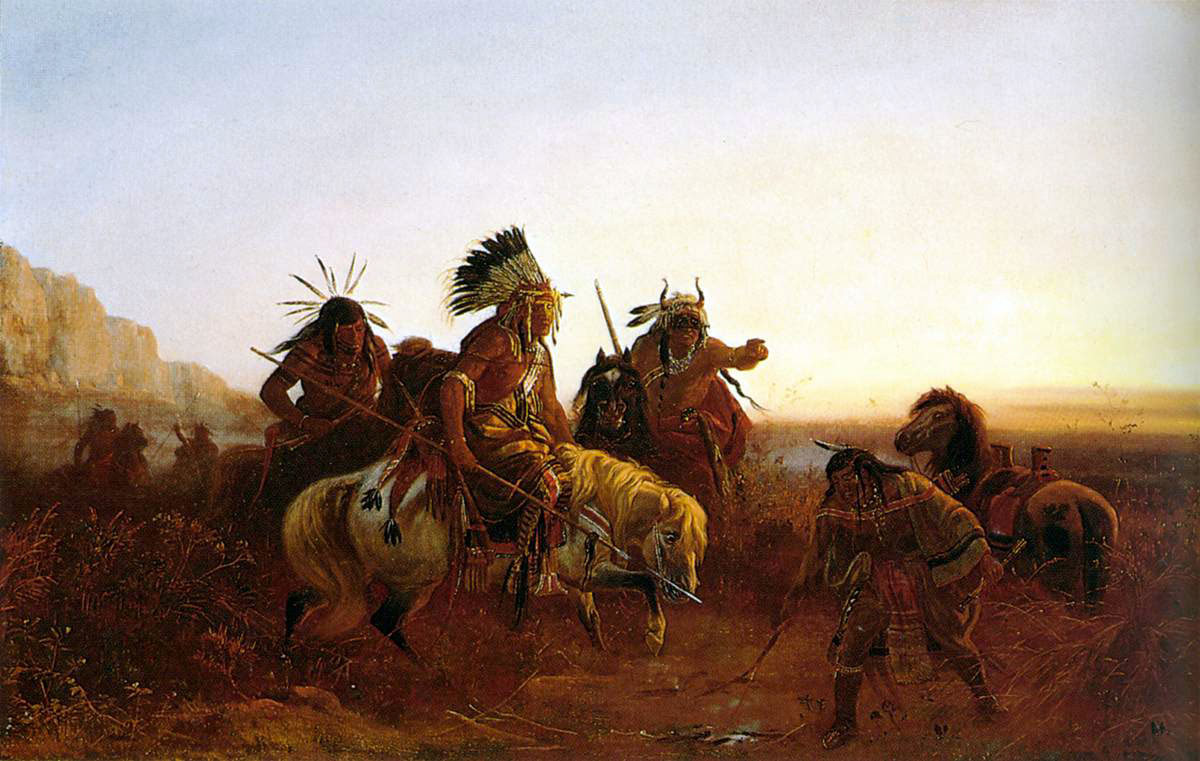 The "Lost Trail" painted in ca. 1856 by Karl Ferdinand Wimar - a German painter who travelled up the Missouri River and based his painting on actual observations. So far, I have not been able to find 19th century records of the Osage terms for the three or four trails that branched out of St. Louis. The trails may have been named for the directions their travelled (south, west, etc.) or for their relationship to the major rivers. Relevant Osage vocabulary according to LaFlesche (1932: 11, 111, 182, 294, 303, 332): u-zhon-ge is a trail, a'-k'a is south, mon'-ha is west, Ni-sho'-dse is Missouri River, and Ni-u tonga is Big Water = Mississippi River. Quintero (2009) provides another perspective on Osage vocabulary: ozake is path, maaasce ksihtaha is south, miiaoee ehtaha is west, nii xoce ("smokey water") might be Missouri River and Mississippi River is nii htaka.

Devoy, John
1898 A History of the City of St. Louis and Vicinity, From the Earliest Times to the Present. St. Louis, MO.

Houck, Louis
1908 A History of Missouri from the earliest explorations and settlements until the admission of the State into the Union. R. R. Donnelley & sons Company.

Warm thanks to Neathery Batsell Fuller for helping with library and field research. Many thanks Russell Weisman for sharing results of the MoDOT research related to the New Daniel Boone Bridge, Interstate 64. Special thanks to Professor John Kelly at Washington University for suggesting that I look in to the question of Indian trails as a contribution to The Mounds  Americas First Cities Feasibility Study Draft. Webpage constructed 24 January 2014
Webpage modified 17 February 2014