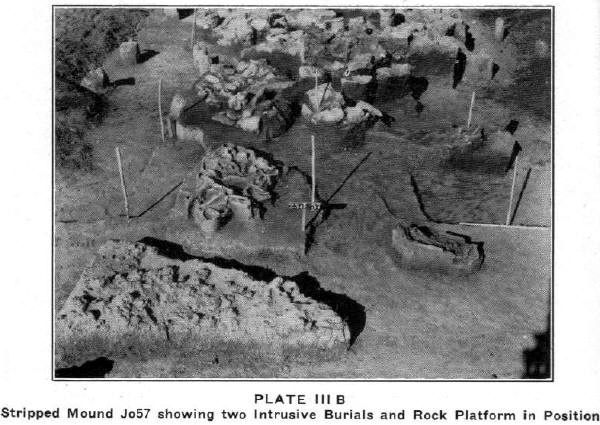 Robert McCormick Adams excavated at the Govro Mound as part of a Works Projects Administration Project. The mound measured 27 x 13 meters with a height of less than 1 meter. The center of the mound had been destroyed by looters sometime before 1892 based upon a historic penny found in the fill. The mound contained several clusters of field stone that probably capped burials. Adams believe that they were symbolic representations of a bear and deer. Two intrusive burials were found in the southwest quadrant of the mound. One was a tightly flexed adult burial that had been covered with limestone slabs. The second intrusive burial consisted of several long bones and decapitated skulls belonging to adults.

Two more intrusive burials were identified by Adams. One was placed in a pit that had limestone slabs forming a floor; the burial placed in the pit had a carved bone pen (deer bone?) in the shape of a bird in direct association with the back portion of a skull.