The stone box graves at the Kauffman Site (23JE206) were discoverd during October of 1972 when bulldozers cleared land on the edge of Fenton, Missouri. Leonard Blake was contacted by local artifact collectors and he helped recruit a volunteer "rescue archaeology" crew from St. Louis Community College - Meramec. Professor Carl Kuttruff supervised the excavation with the assistance of Jim Radford. Professor Douglas Givens wrote a brief report on the skeletal remains. Fieldwork at the site ended in March of 1973. 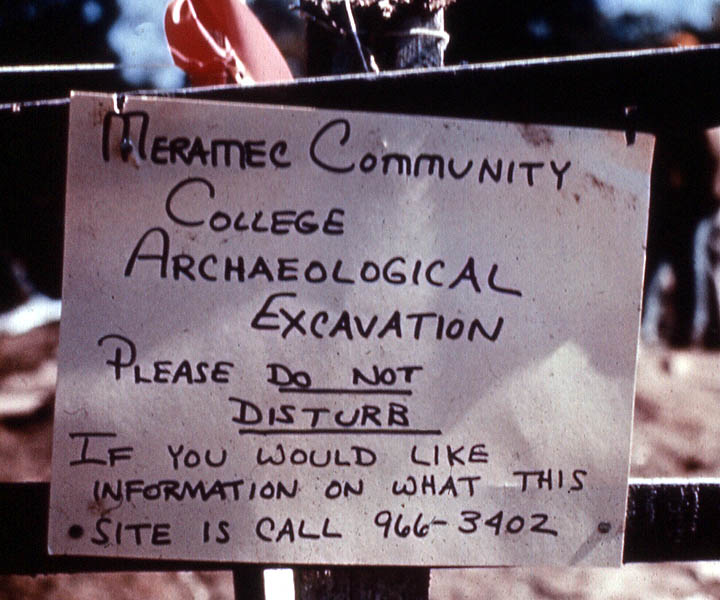 STLCC sign at the excavation. Looting was a serious problem at the site during the weekdays. Very little material culture was found in association with these burials. Single examples of shell tempered sherds found with graves 19 and 102 confirm that these graves belong to the Mississippian tradition. The few chert flakes and bifacially tools were manufactured from the pinkish-white chert that is typical of the Crescent Quarries downstream along the Meramec River.

Plan of the coverstones over grave number 25.

Plans of the burial in grave number 25. The skeletal remains were 30.8 cm below the ground surface. Approximately 1/3 of the bones were preserved; the other portion were missing due to the acidity of the soil. The burial was semi-flexed and field identification indicated that it was probably a male, aged 25 to 30. The burial had been made on its back with face turned towards the north. Orientation of the grave was 305 degrees. The grave measured 109 cm in length and 53 cm. in width. A freshwater mussel shell measuring 5 x 4 cm. and a few chert flakes were the only items assosciated with the grave. Photograph taken 14 October 1972.

In situ photograph of the burial in grave 7. A wooden stick was wedged between the north and south walls of the grave to keep it from collapsing during excavation. The photographic arrow shows the axis of the grave and does not point north. Photograph taken on 12 November 1972.

Plan of the limestone slabs that covered grave 7. The slabs covered an area 150 cm. in length and 73 cm. in width.

Raising the limestone cover slab from a grave at the Kauffman Site. The slide is not labelled but this is probably grave 7.

Plan of the burial in grave 7. Approximately 25 to 30% of the skeleton was preserved; the west cover stone had collapsed and allowed significant leaching of the skeletal remains. The surviving bones indicated that the burial was an adult (sex could not be determined) who was approximately 25 to 30 years old at death. The burial was 36 cm. below the ground surface with an orientation 110 degrees. The head was placed at the east end of the grave. The body was buried in a flexed position on its left side and the face was turned to the south. Six or seven pieces of chert were found in the grave fill near the neck of the burial and a single walnut shell was found in northeast corner of the grave (there is a good chance that the walnut shell was a rodent introduction). A single stone bead, identified as galena (native Lead ore) was found in association with the back of the skull.

Plan of the limestone slabs that covered grave 1. The grave was oriented 202 degrees and measured 135 cm long by 70 cm in width.

Sketch of burial 1 that was identified in the field as a male aged 25 to 35 at time of death. The burial was made extended (not flexed) on his back with his face looking upward. The soil fill inside the grave included 2 pieces of charcoal, at least 2 freshwater mussel shells, and a handful of chert flakes.

Cleaning soil away from the limestone cover slabs and limestone wall slabs of a stone box grave after it was hit by a bulldozer.

Closeup of skull in grave 17. The skeletal remains were 32 cm below the ground surface. The burial was badly disturbed by looters. The undamaged bones were identified in the field as the remains of a male, aged 30 to 35 who was buried in a flexed position. Grave orientation is 290 degrees. The size of the grave measures 145 cm by 65 cm. The burial was made with the face turned to the south. Photographed on 19 May 1973.

Plan of limestone cover slabs on grave 17 (large grave) and grave 18 (small grave). The dimensions of grave 18 are 79 cm. in length and 38 cm. in width. The burial was not flexed and must have belonged to a child. Orientation of the grave is 280 degrees. The human remains in grave 18 were 38 cm. below the surface. 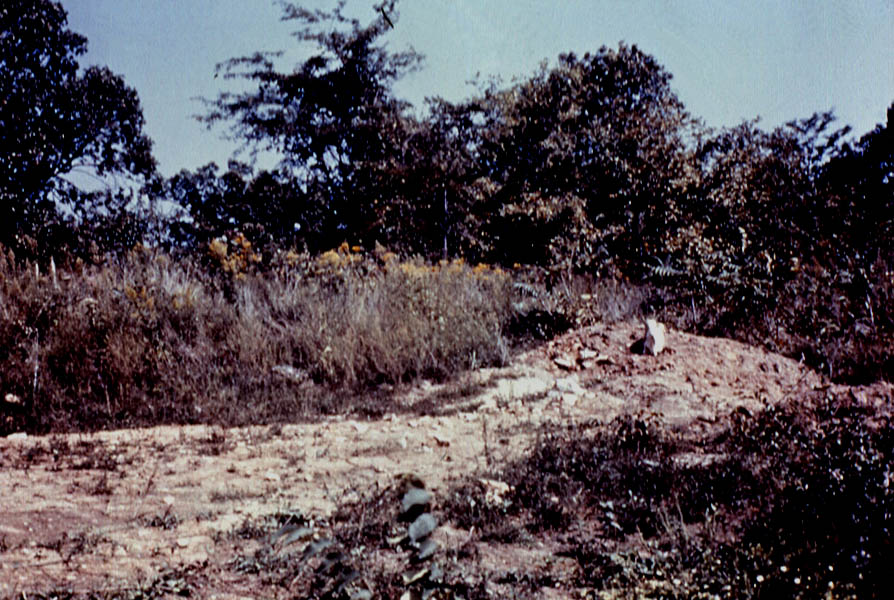 Brushy vegetation at the Kauffman Site before bulldozing for construction of a mobile home court. 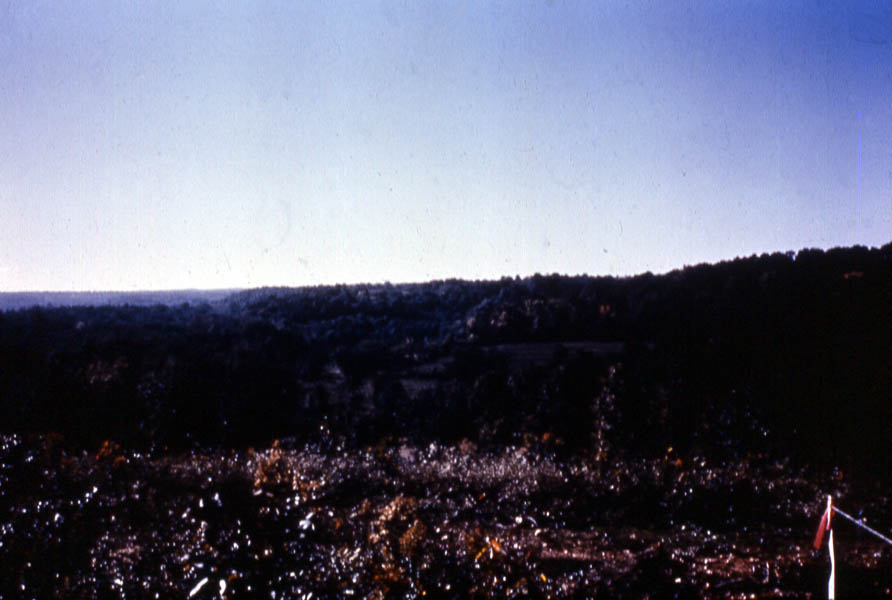 View of the Meramec River Valley and bluffs from the Kauffman Site.