Robert McCormick Adams excavated in the village and three mounds at the St. Jo site on behalf of the Works Projects Administration. Artifacts and records were divided between the St. Louis Ascademy of Science, the Missouri Resources Museum in Jefferson City, and the Smithsonian. Mound Jo1 and Jo35 were adjacent to each other. Jo1 measured approximately 10 meters in diameter. A deep looter pit was situated in the center of the mound. The mound included two partly articulated adult burials (plate IIA) beneath a square platform of limestone slabs. Another burial was discovered in a "sub-mound" pit; it was associated with a finely flaked expanding stem point. The fill of the mound included limestone tempered pottery sherds (both cordmarked and plain) and un-notched triangular points.

Mound Jo35 measured 14 x 18 meter. Several pits in the top of the mound were the result of looters. 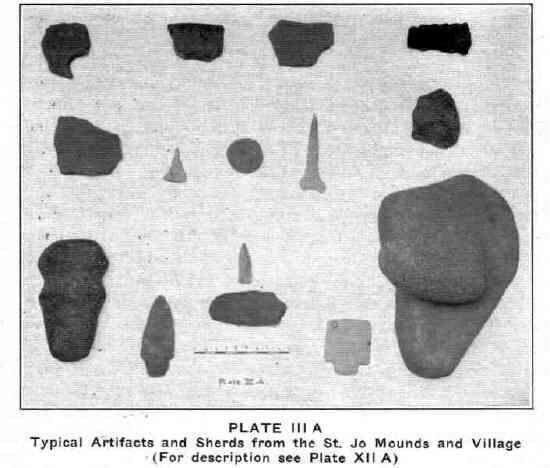