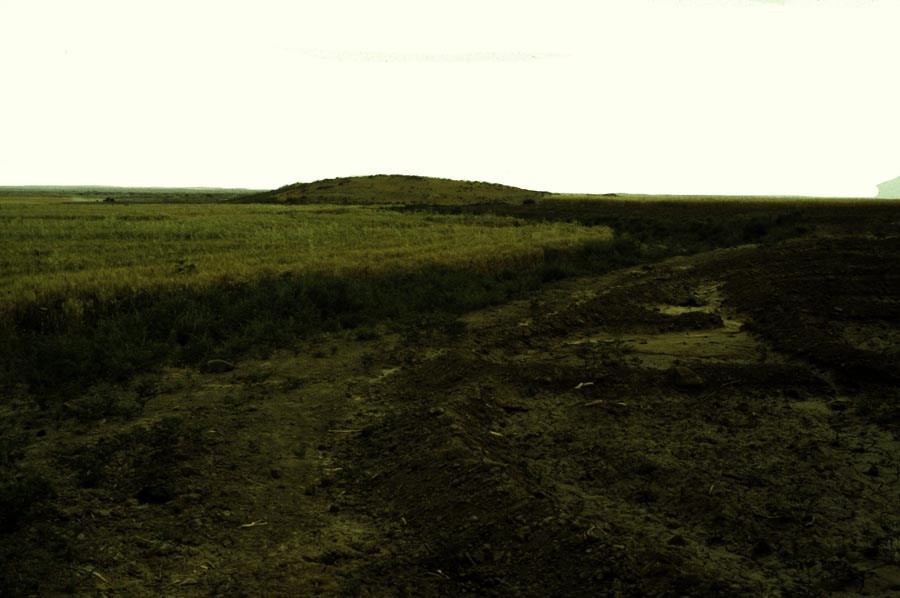 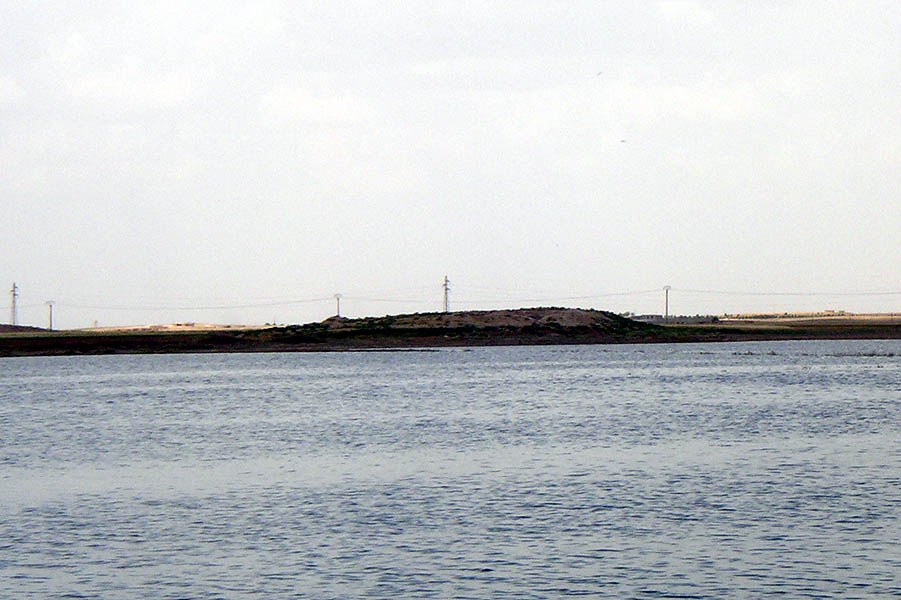 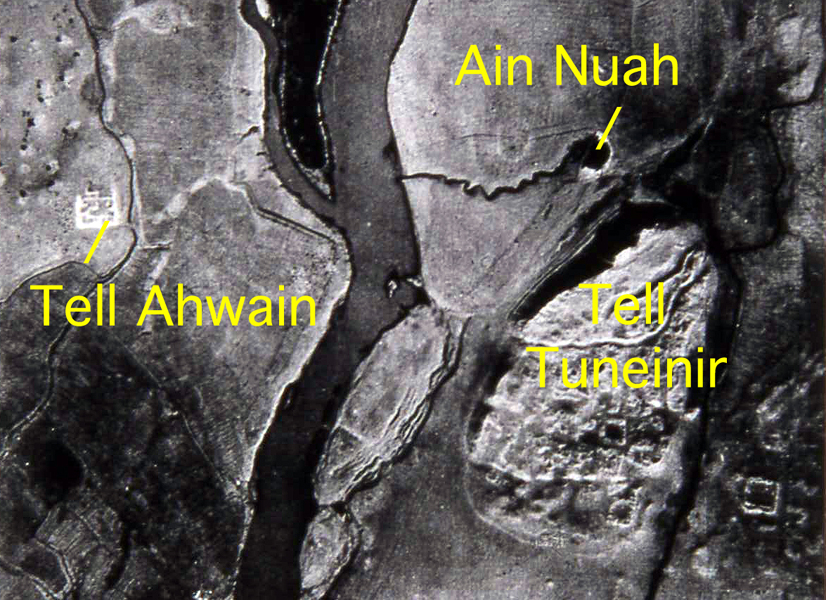 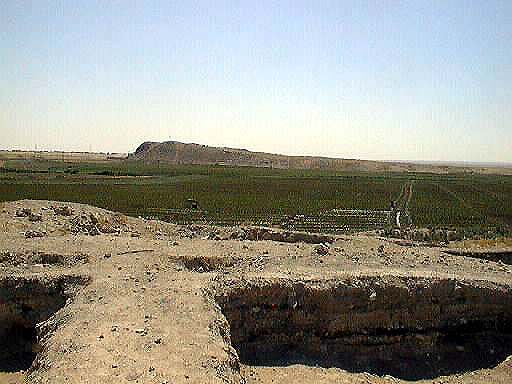 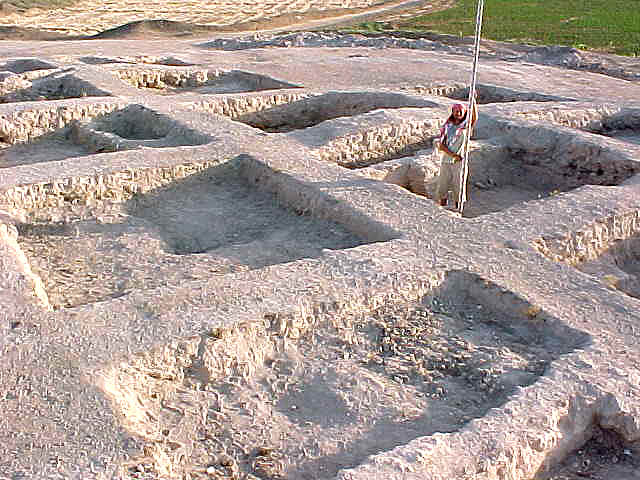 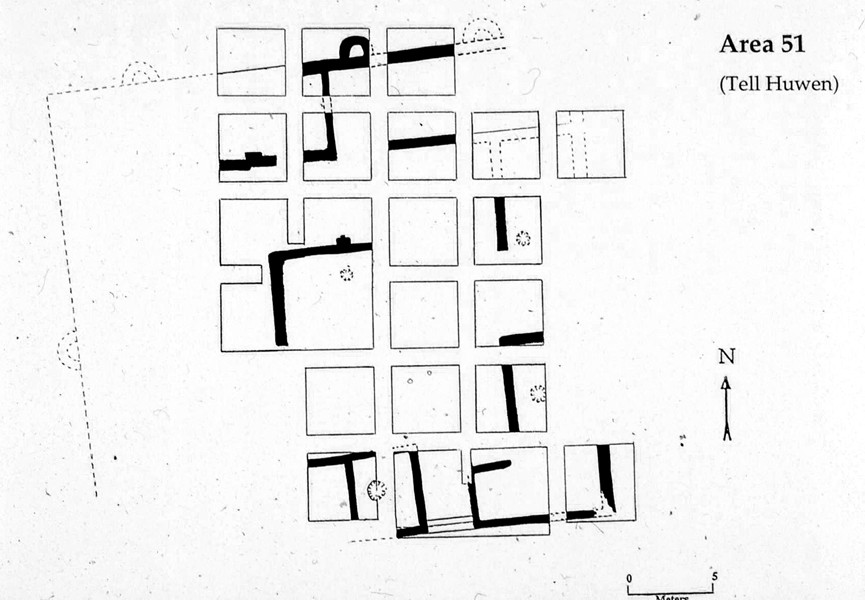 Plan drawn during 2000 of excavation units and wall stubs at Tell Ahwain. 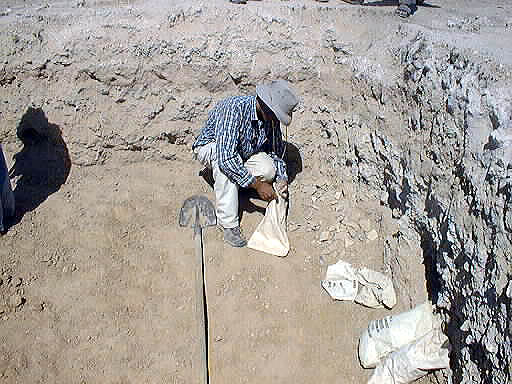 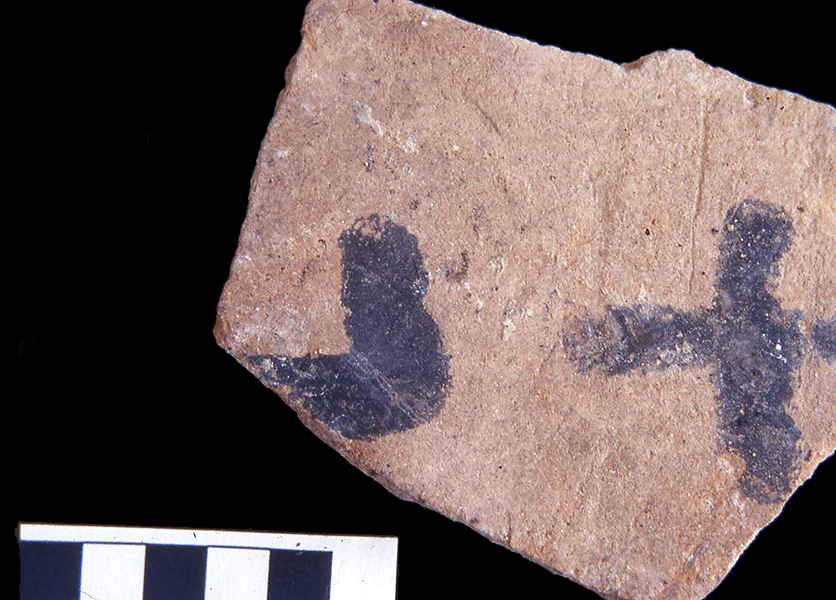 Tar inscription on a bodysherd found at Area 51, Square 54, locus 04. Pottery registration no. 10567. Scale in centimeters. 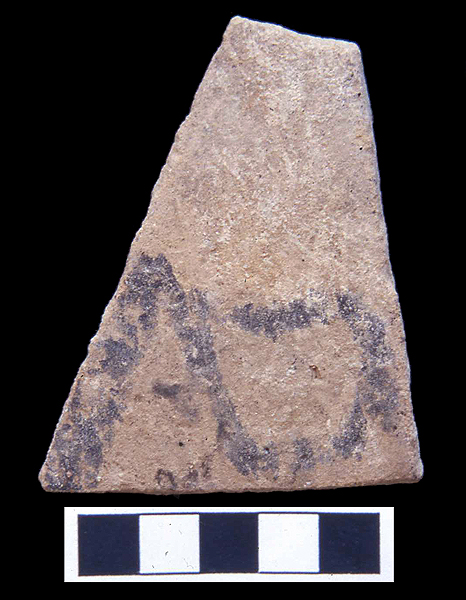 Tar inscription on a bodysherd found at Area 51, Square 43, locus 10. Pottery Registrtation no. 10626. Scale in centimeters. 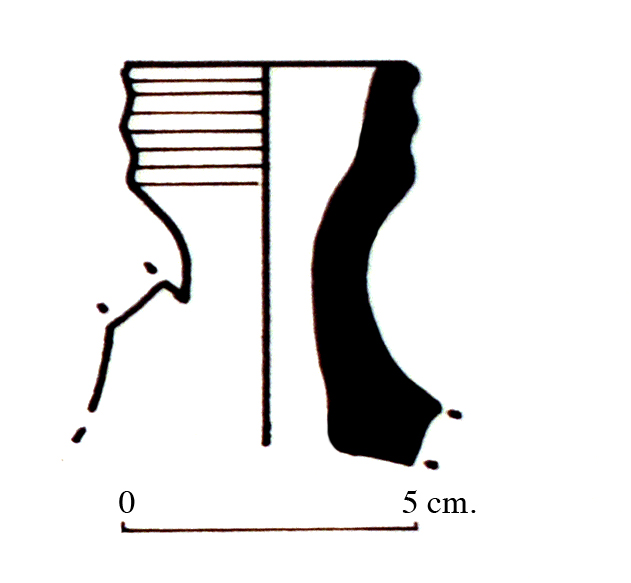 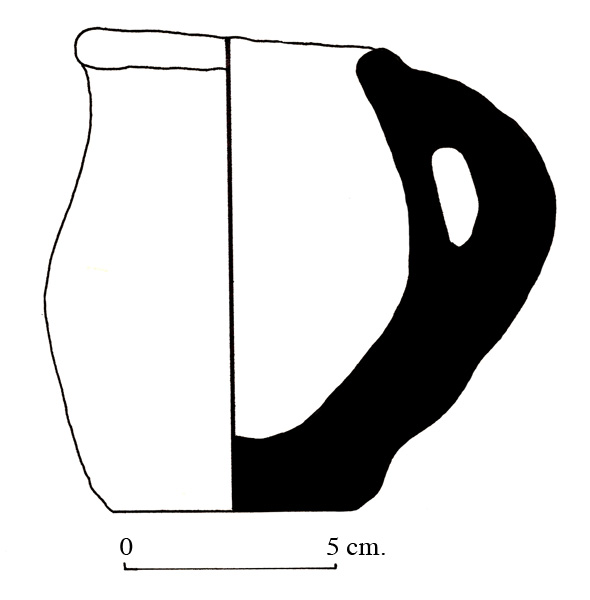 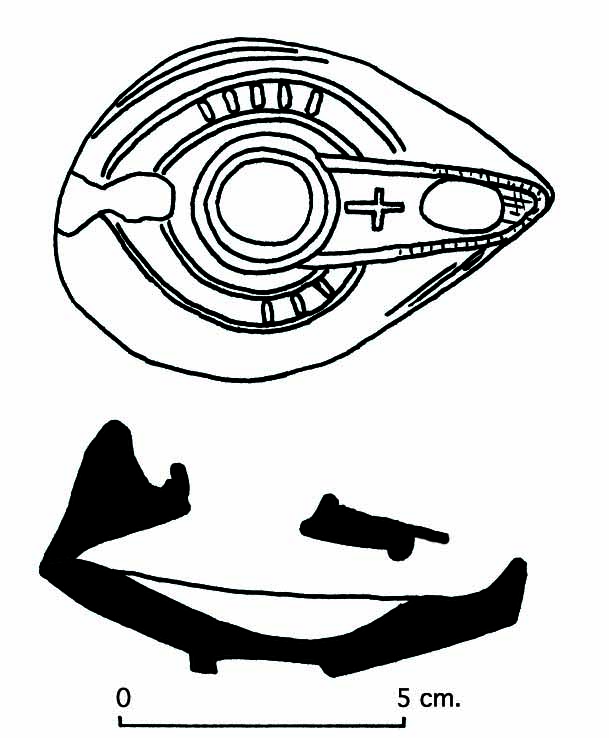 Drawing of a moldmade lamp found in Area 51, Square 54, Locus 003, Pottery Registration number 8605.
The shape and cross design on the lamp closely parallel the Late Umayyad and Abbasid lamps found in Areas 9, 10, and 11 (the monastic complex on nearby Tell Tuneinir). Two small tells are situated within a kilometer of Tuneinir. The taller tell is Tell Ahwain (Arabic, Brothers) while the shorter tell is Tell Hi'a (Arabic, Snake). Neither Tell Ahwain nor Tell Hi'a were described in the reports of the French or German archaeological surveys of the region to be impacted by the Khabur River reservoir. They were too small to be considered significant by the survey crews. The team from St. Louis Community College survived both small tells and realized that Tell Ahwain had a Medieval Islamic component. 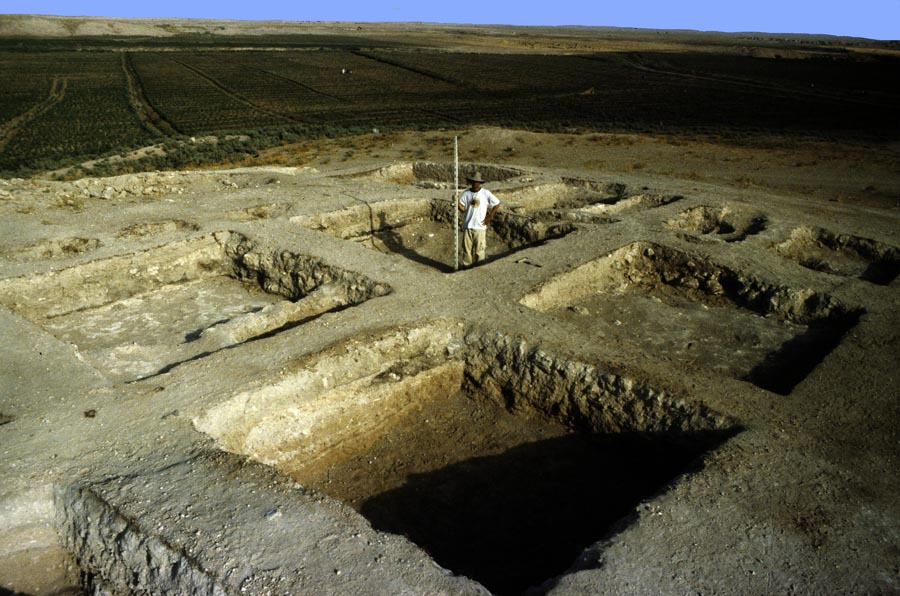 David Nirgenau (a veteran of the 1998 excavation season at Tuneinir) volunteered to supervise two crews working at Tell Ahwain. A grid system was established for the site using the East-West base line from Tuneinir that runs through the Benchmark on the summit of Tuneinir. Most of the excavation units were virtually sterile though masonry walls were uncovered. One room did contain hundreds of undecorated pottery sherds. Among the sherds were three or four body sherds with Syrian letters painted on their surface.

The excavation of 14 excavation units (5 x 5 meter units with half meter balks) demonstrated that the structure was occupied during the Abbasid Period. An intact Abbasid Period lamp, identical to lamps from Areas 9, 10, and 11 was discovered in Area 51. 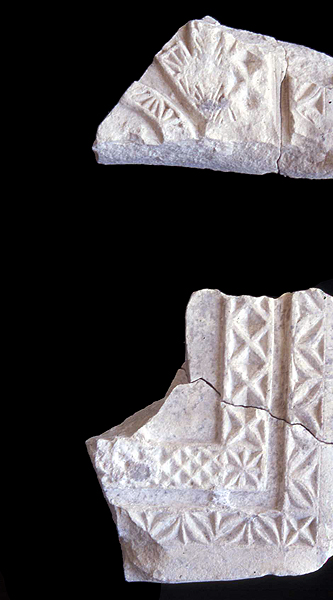 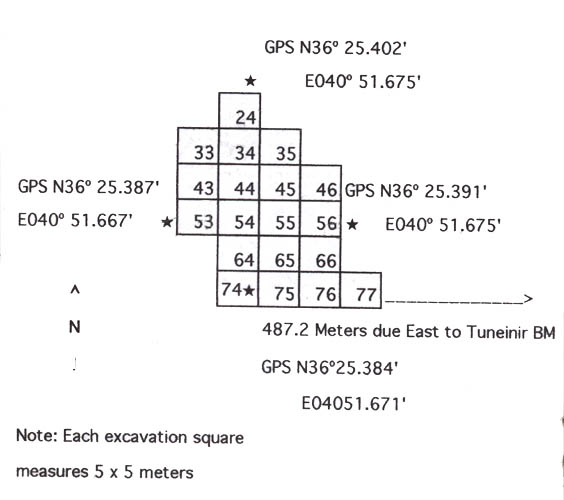 Excavation units and longitude/latitude from Area 51 calculated by a handheld GPS device.